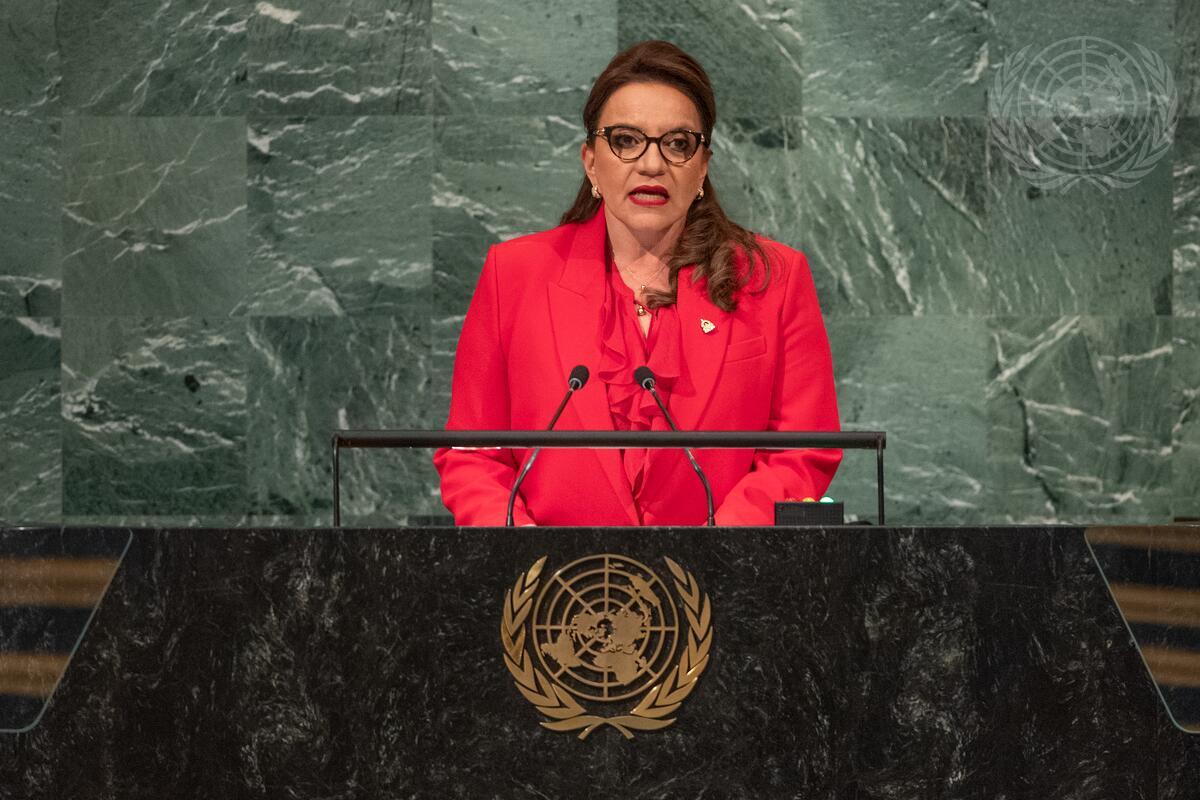 IRIS XIOMARA CASTRO SARMIENTO, President of Honduras, noting that she is the first woman to lead her country, said that her administration represents the first democratically elected Government in Honduras following 13 years of dictatorship.  It is impossible to understand Honduras’ people and its migrant caravans without recognizing the “cruel suffering we have been forced to endure”, she stressed, pointing out that 13 years of dictatorship — overseen by the international community — led to a sixfold increase in public debt and a poverty rate of 74 per cent.  Stating that these figures are unlikely to astound anyone in a world that today lives under “monetary dictatorship”, she said the same imposes draconian measures of fiscal discipline on the poorest and increases the suffering of the majority left behind.  For Honduras to survive, it must reject this so-called austerity that favours those who concentrate wealth and increase inequality exponentially.

She said that, since her administration took office in January 2022, it has demonstrated an iron will to find consensus to act on its commitments.  However, conspiracies are being fostered in the same sectors that looted the country, emboldened by an anti-democratic attitude cloaked in diplomacy.  The public policy endorsed by international finance’s “rent-seeking model” over the last 13 years has pulled Honduras into a world of poverty, failed projects, corruption, looting and drug-trafficking, she said.  Further, no international witnesses to the fraudulent elections in 2013 and 2017 were ignorant of the fate to which they were dooming the Honduran people.  Capitalist hubris and petty self-interest led many to opt for deceit, she added, and organized crime brought the country to the brink of the abyss.  The poor nations of the world, she underscored, will no longer tolerate coups or the use of revolutions organized to habitually plunder their extensive natural resources.

She went on to say that, while the world’s industrialized nations are responsible for grave environmental degradation, they still “make us pay for their lifestyles of excess” and embroil countries like Honduras in endless crises.  She underscored that, by contrast, the Honduras led by her administration will be built on the premise of humanist remodelling coloured by dignity and working to restore the environment and protect the common good.  “Those that think of themselves as civilized,” she said, never tire of staging invasions, waging war, engaging in financial speculation and “crucifying us with their inflation time and time again”.  Against that backdrop, she demanded that her country be respected and that other nations cease trying to destabilize, impose measures on or choose with whom Honduras should have relations.  “Never again will the stereotype of ‘banana republic’ weigh heavy upon us,” she stressed, emphasizing that her country will end the monopolies and oligopolies that impoverish economies.

The Government will return to the rule of law, she said, highlighting national efforts to eliminate abuse of the fiscal system; declare energy a public good; bolster workers’ rights; provide electrical subsidies to the poorest citizens; renegotiate free-trade treaties; and invest in development by substituting imports.  Noting that women have been denied the right to be included in development for centuries, she said that the Government will also recognize their important role as part of society’s “spinal column”.  Further, it will provide healthcare, quality education, security and food sovereignty to the country’s youth.  Stressing that every caravan of migrants that fled the dictatorship “is a severe loss for our country and their families”, she expressed solidarity with and support for the Honduran diaspora.