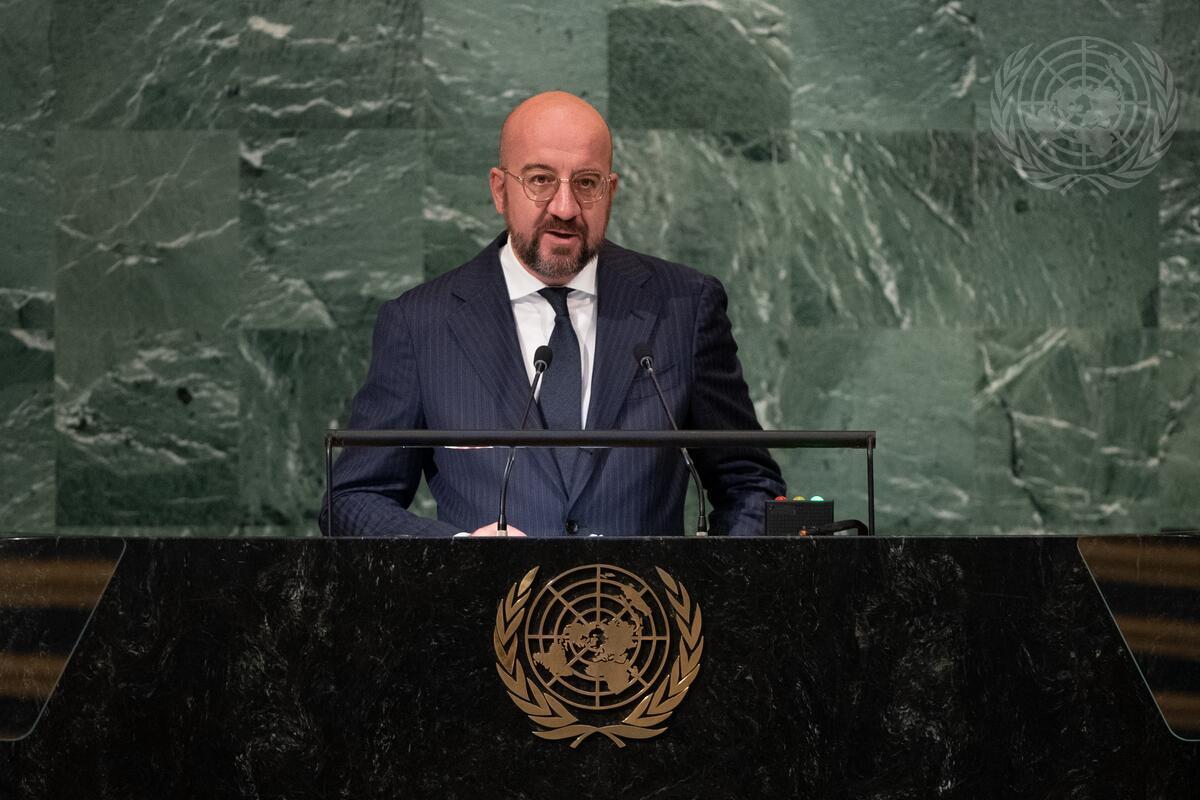 CHARLES MICHEL, President of the European Council of the European Union, in its capacity as observer, called choosing hope in a time of horror the promise of the United Nations, the foundation of the Union and what those on his continent want for the whole world.  Every war, he said, is a denial of humanity and all suffering deserves the same involvement — whether it is in Yemen, Ethiopia, Sahel, Myanmar or Ukraine.  The Kremlin has started a war against the Ukrainian people and hundreds of millions all over the world are threatened with famine, left without heat or crushed by energy prices.  “It is a hybrid war.  It combines the violence of weapons with the poison of lies,” he continued.  The lie that the Russian Federation’s security was threatened by “the West”.  The lie that the war aims to prevent a genocide of Russian speakers in Ukraine and aims to “de-nazify” the area.  The lie to call the aggression against Ukraine a ‘special operation’ and not a war.  The lie is that sanctions cause food and fertilizer shortages.  In fact, even before the war, the Russian Federation unilaterally reduced exports that led to price volatility.  The Russian militarily blocked the Black Sea ports and European Union opened Solidarity Lines. The Secretary General’s agreement opened the navel corridor, but the Kremlin threatens not to extend it.  And once again, he emphasized, the most vulnerable countries were main victims.

The foundation of this war of colonization is imperialism and revisionism, which tramples international law and the Charter to the point of threats of nuclear weapon use and the actual use of Europe’s largest nuclear plant as a military base.  In that regard, he supports the efforts of the International Atomic Energy Agency (IAEA) to restore security around the Zaporizhzhia nuclear power plant.  While the European Union asks no one to choose between the East or the West or the North or the South, there is a choice to make between an order based on rules and one based on the rule of the strongest, he said.  Today, the Kremlin is a blackmailer, bringing war to Europe.  The European Union, he said, while detailing the levels of cooperation with different regions in the world, extends its hand to the world to jointly tackle challenges like the pandemic, natural hazards and protecting human rights — “multilateralism is the DNA of the European Union”.  Moreover, he promised never to close his eyes for human rights abuses, especially in Xinjiang or Hong Kong.  Besides that, he proposed that if a permanent member of the Security Council starts an unprovoked and unjustifiable war, that their membership be automatically suspended.  He also spoke about the European Union’s commitment to the Group of Five for the Sahel joint force, the Joint Comprehensive Plan of Action, women’s rights worldwide, a ceasefire in Yemen, a two-State solution to the Israeli-Palestinian conflict and peace in the Southern Caucasus.

On climate change and energy, he said that the bloc will campaign for the implementation of the Paris Agreement and going beyond that at the upcoming twenty-seventh Conference of the Parties to ensure a fair and equitable transition.  More is needed, he emphasized, more coordination, more money, more sovereignty, including food sovereignty in Africa. In coordination with the World Health Organization (WTO), the idea of a treaty on pandemics was launched to strengthen global health security.  Lastly, he reiterated that the Union, just like the United Nations, was founded on a project of hope and on the horrors of two world wars.  He called upon world leaders to live up to their responsibility and give hope and stop horror.