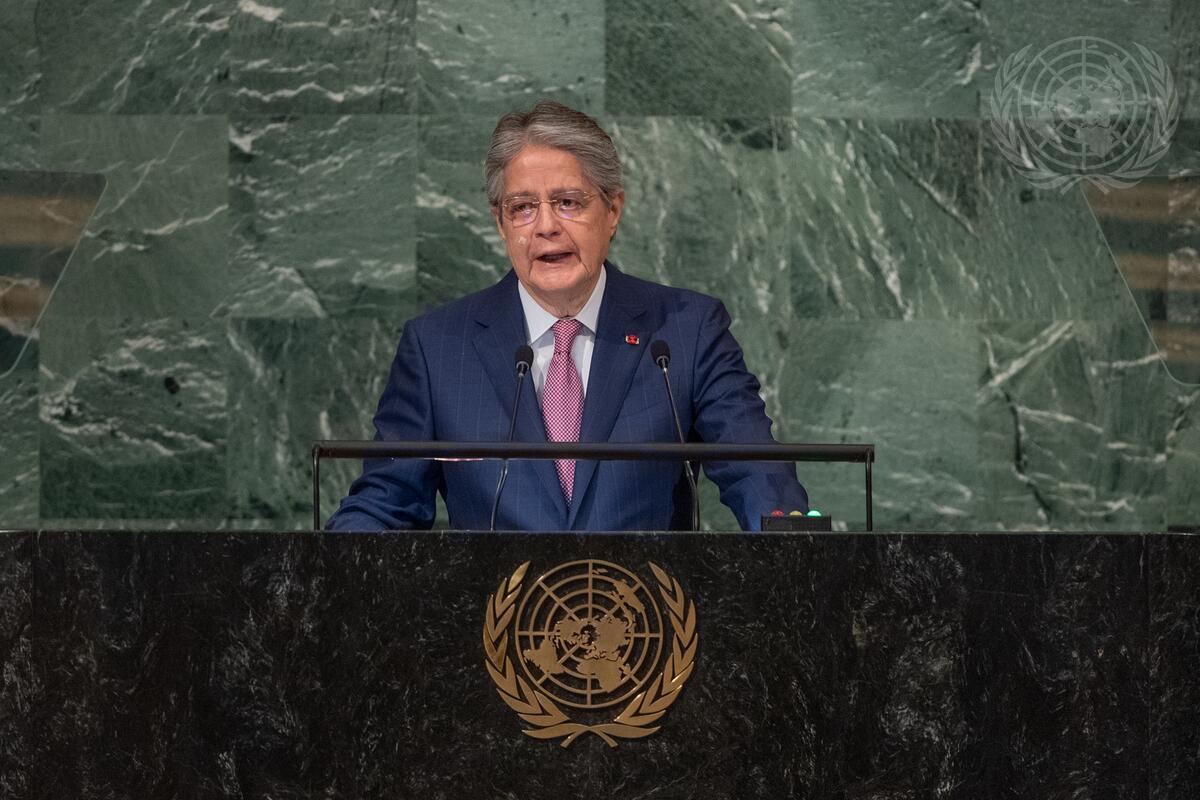 GUILLERMO LASSO, President of Ecuador, recounted the story of Mateo, a young man from Colombia, who was going about his daily activities and pursuing a medical degree at the Zaporizhzhia National University, when his dream turned into a nightmare due to the Russian Federation’s war against Ukraine.  Mateo came very close to the most dangerous military actions, but with his ingenuity and the help of others, was able to go to the nearest border.  At the same time, Ecuador was in the process of establishing a national crisis committee, he said, highlighting that it fulfilled its goal of repatriating 730 Ecuadorian citizens on board humanitarian flights.  Mateo, whose sister is Ecuadorian, was able to join one of those flights and today Mateo’s Colombian parents now live in Ecuador thanks to special humanitarian visas granted by the Government of Ecuador.  Colombian, Peruvian other Latin Americans and even Ukrainians also managed to escape the war thanks to the enormous diplomatic effort led by his country, he said, stressing that:  “Ecuador is there to help the world.  Ecuador leaves no one behind.”

He went on to say that for most of his life he has cultivated a very simple idea:  “The only way to generate value is by always and in every activity putting human beings at the centre.”  This is vital because any institution or political system derives its legitimacy from the well-being it creates for its citizens.  “International institutions sponsor some of the threats that bring us here today,” he pointed out.  To keep those threats away, the international community must clearly point to the “ugly face of authoritarianism” and create a world order in which all citizens feel included, connected and represented, and where opportunities flow freely from one corner of the planet to the other.  In so doing, it becomes harder for would-be dictators to blame their failures on supposed “asymmetries” of the global order, he said, warning against the pretext of a false notion of sovereignty that is in reality arrogance.

Today, his country is engaged in an unprecedented fight against drug trafficking, he said, noting that the World Drug Report 2022 ranks it third in the world in terms of the most cocaine seized.  His country is stepping up activities to maximize the seizure of drugs and dismantle the transnational organizations that transport them.  He said this “monster” has various faces:  human trafficking, money laundering, illegal weapons trafficking and even illegal mining.  It is calculated that transnational crime moves an amount of money that oscillates between $1.6 and $2 trillion — figures that exceed the entire economy of a country like his.  However, it would be a mistake to quantify the consequences of transnational crime only in economic terms.  They must be measured especially in terms of irreparable losses, lives lost and dreams destroyed, he underscored, recounting that just two days ago, in the city of Guayaquil where he was born, a prosecutor was assassinated by organized crime hitmen.  The prosecutor was an official whose investigations included major cases involving transnational mafias.  Transnational crime requires a transnational solution, he stressed, calling on united efforts and increased cooperation.

In the area of human mobility, Ecuador is maintaining its long history as a transit country and a refuge for migrants, he continued, noting that it has traditionally been the biggest host country of refugees in the entire Western hemisphere.  Beyond welcoming them, Ecuador makes special efforts to guarantee the rights and, above all, the integration of migrants, particularly families whose countries of origin do not offer alternatives for a better life, and who have no option other than to flee.  With half a million Venezuelans living in Ecuador today, his country is one of the three main destinations of migrants from Venezuela.  Despite its budgetary difficulties, his country attends to that population with health care and other social services.  Moreover, it has begun the process of regularizing their status, he said, voicing hope that fellow Member States will support his country in that endeavor.

Turning to the climate crisis, he said that, although Ecuador’s greenhouse gas emissions represent barely 0.18 per cent of the global emissions, it has decided to transform itself as the first country in Latin America and the fourth in the world to adopt a cross-cutting policy towards the environmental transition, including creating a special ministry for this.  For that reason, almost a year ago, in the framework of the climate conference in Glasgow, he announced the creation of a new marine reserve in the Galapagos Islands called “Hermandad” or “Brotherhood”, which increased by 60,000 square kilometres the protected area of that natural heritage site.  Also in 2021, he signed the Declaration for the Conservation of the Marine Corridor of the Eastern Tropical Pacific, together with the Presidents of Colombia, Costa Rica and Panama.  This joint effort gives a new dimension and political impetus to the goals of the marine corridor, opening new opportunities for cooperation, financing and technical assistance for the conservation not only of Ecuadorian or regional biodiversity but also of global biodiversity.