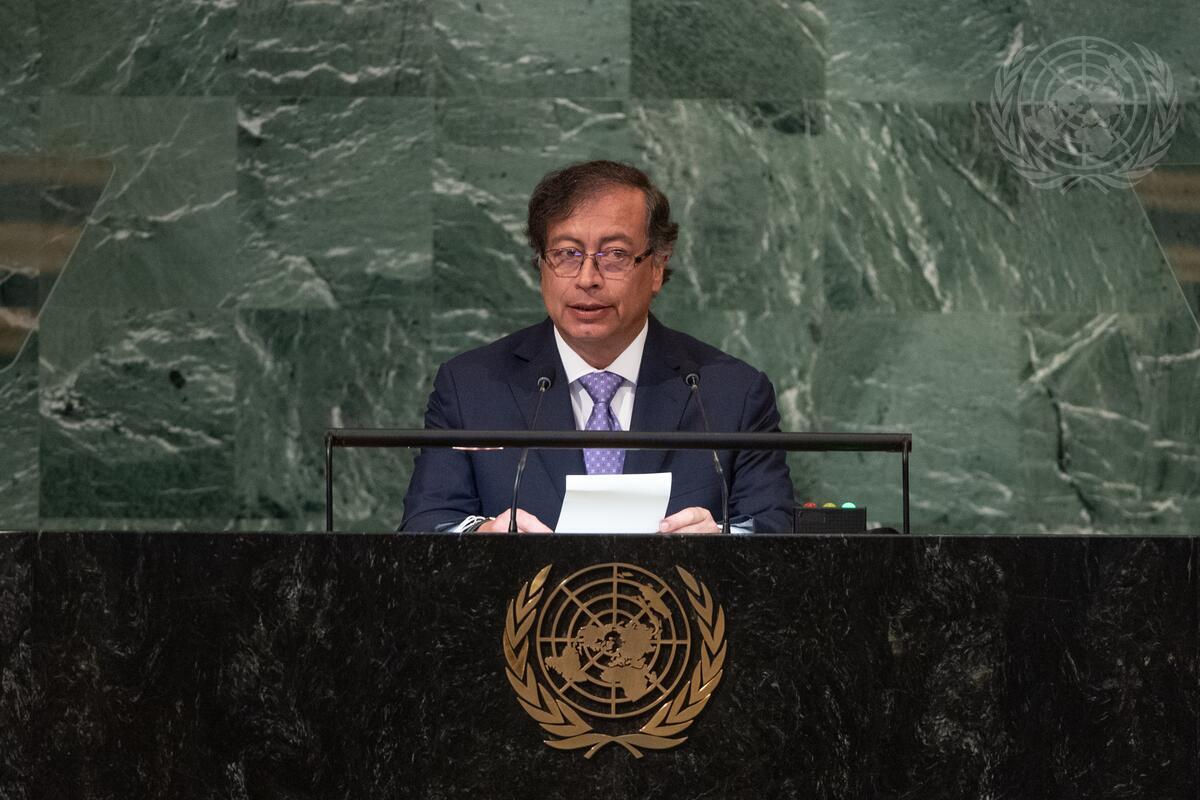 GUSTAVO PETRO URREGO, President of Colombia, said in his country, violence and beauty exist side by side.  “How can the biodiversity of life intertwine with the dances of death and horror?  Who is responsible for breaking the charming spell with terror?”  he asked.  The oxygen on the planet emanates from the jungle.  One of the plants absorbing carbon dioxide is one of the most persecuted on Earth.  “Wherever it grows, we seek to destroy it,” he noted.  The coca plant — sacred to the Incas — uncovers paradoxical crossroads:  the jungle the world is trying to save is being destroyed at the same time.

To destroy the coca plant they throw poisons, glyphosate en masse that contaminates the waters and arrest their cultivators and imprison them, he went on to say.  For destroying or having possession of coca plants, 1 million Latin Americans have died and 2 million African Americans have been imprisoned in North America.  The destruction of the Amazon has become the catch phrase that States and businesses follow while ignoring scientists who describe the jungle as one of the major climate pillars.

Stressing that there is nothing more hypocritical than the discourse “saving the jungle”, he added that the jungle is disappearing, along with all its life.  The enormous sponge absorbing carbon dioxide is evaporating and the Amazon — the saviour — is seen as the “enemy” to be defeated, while the people who cultivate it are demonized.  “My country interests you only if you spread poison in its jungle, take its men to prison and cast its women into exclusion,” he exclaimed, condemning the war on the jungle, its plants, and its people.

“What is more harmful to humanity: cocaine, carbon dioxide or oil?” he asked.  The will of power has decided that cocaine is the poison that must be persecuted, even though it causes a minimum of overdoses.  On the other hand, carbon dioxide and oil must be protected, even though their use can lead humanity to extinction.  Criticizing endless consumption, he called for saving the Amazon and the life on Earth.  With mathematics and climate models, scientists said that the end of the human species was upon us, that the time left is not even centuries.  However, the world has stopped listening.

Spotlighting “invented” wars in Ukraine, Iraq, Libya, and Syria, he said wars have served as an excuse to not tackle climate change.  Climate disaster that will kill hundreds of millions of people is not produced by the planet.  The Amazon jungle uncovers the failure of humanity, he asserted, emphasizing that behind the addition to cocaine, oil, and coal lies the true addition of this phase of human history:  the addiction to irrational power, profit, and money.  In this context, he called on all Latin America to join Colombia in the efforts to defeat the irrational world that is killing the Amazon and exchange death for life, death for nature.  “Do not put pressure on us to go to war, it is time for peace,” he concluded, adding that without peace with the planet, there will be no peace between nations.