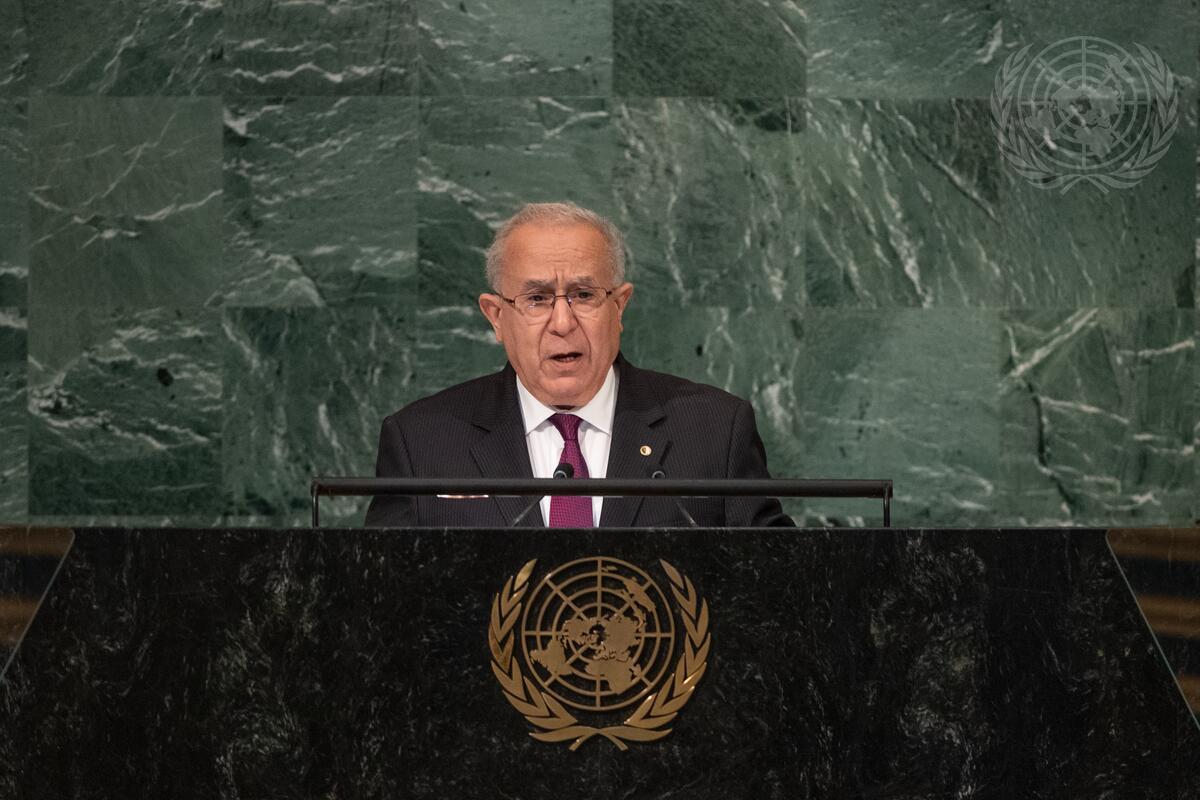 RAMTANE LAMAMRA, Minister for Foreign Affairs of Algeria, in noting polarization’s resurgence and the crisis in Ukraine, reiterated his country’s full support for the Secretary-General’s reform efforts.  The international community must address the structural imbalances of global governance mechanisms by ensuring parity and equality among all States and ending the marginalization of developing ones.  The world’s collective security, he explained, is linked to the stability and prosperity of all peoples.  In celebrating the sixtieth anniversary of its independence, Algeria will continue its contributions to international peace, security and sustainable development.  To that end, his country looks forward to hosting the Arab League Summit in November as a decisive moment for addressing regional and international challenges.

The question of Palestine, he reiterated, remains key to restoring security and stability in the Middle East.  Alegria continues to promote national unity among the Palestinian people, stresses their right to establish an independent State based on 1967 borders with Jerusalem as its capital, supports the request for full membership and calls for ending the Syrian Golan’s occupation in line with relevant United Nations resolutions and the Arab Peace Initiative.  Reaffirming his country’s support for the inalienable rights of the people of Western Sahara to exercise self-determination and independence, he called upon the United Nations to redouble its efforts through the Secretary-General’s Personal Envoy.  He then urged the international community to support Mali on accelerating the peace agreement’s implementation and Libya on advancing national reconciliation.  As the African Union’s coordinator on efforts to combat terrorism, violence and extremism, Algeria will intensify its efforts with concerned States to ensure new, dynamic and effective regional responses.  In stressing the need for African solutions to African problems, he urged all countries to support Agenda 2063 and stated:  “Africa is capable of presenting a new model of human civilization, a model that places human beings and the environment at its heart.”

He announced his country’s candidacy for a non-permanent Security Council seat for 2024-2025.  Endorsed by the African Union, the League of Arab States (LAS)and the Organization of Islamic Cooperation (OIC), Algeria will work with other Council members to prevent and resolve conflicts more effectively, support the role of regional organizations, promote women and young people’s participation and ensure protection for all vulnerable groups.  The international community must avoid past mistakes and establish a world order based on sovereign equality, mutual interests and constructive cooperation.

The representative of Algeria, speaking in exercise of the right of reply to address statements made by Morocco’s representative, said that country exploited the rostrum to spread propaganda and lies regarding the situation in the Western Sahara.  Stressing that this has always been an issue of decolonization, he said that Morocco has exploited round-table negotiations to turn the question of decolonization into one of bilateral conflict.  Noting that Algeria is hosting refugees in Tindouf as the result of Morocco’s illegal occupation of the Western Sahara, he stressed the need for a comprehensive referendum that would allow the people of the Western Sahara to exercise their right to self-determination under international law.  “There is no statute of limitations for this right,” he said.  On Morocco’s propaganda concerning the links between refugees and terrorist groups, he said this represents yet another attack on the Sahrawi people, who are simply trying to exercise their right to self-determination.