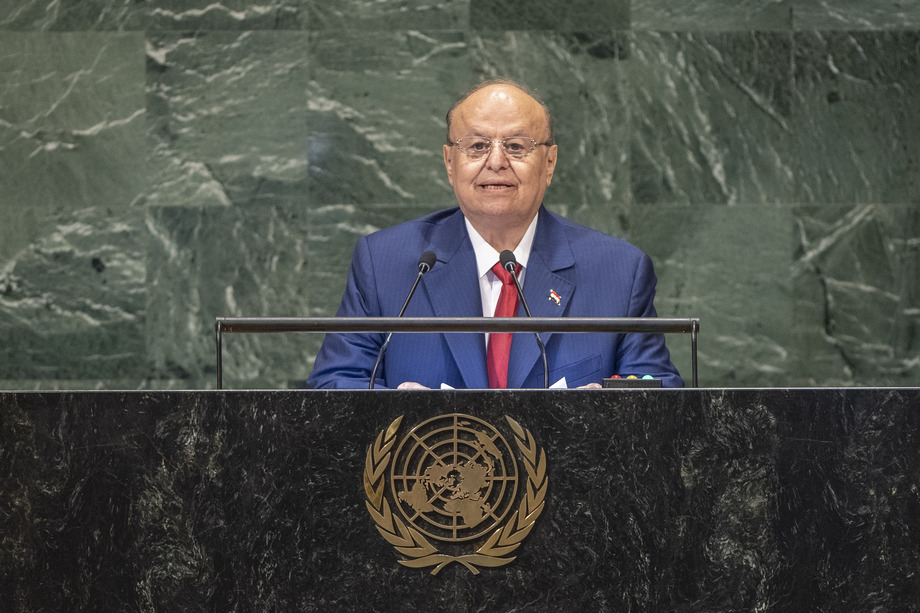 ABDRABUH MANSOUR HADI MANSOUR, President of Yemen, said that his country is still in the grips of war imposed by armed militias supported by Iran and Hizbullah.  These militias are extremists that employ gangster‑like tactics, including blowing up houses and places of worship, and recruiting children by force.  His Government strives to restore peace, security and stability, provide services and create a democratic State where human rights and the dignity of women and youth are respected, based on the National Dialogue Conference and in accordance with various Security Council resolutions.

Yet, the predicament faced by Yemen is not a political conflict that can be contained by dialogue, he said.  Certain factions have torn down Yemen society and sowed hate.  Nationally, they are a proxy that is beholden to Iran and Hezbollah.  He called on the international community to bring pressure to bear on Iran so that it halts intervention in Yemen.  That country is financing the Huthi militia and provides it with weapons, missiles and experts and jeopardizes international shipping routes, overwhelming the country with the illicit trafficking of drugs.  The Yemeni Government’s high-level delegation to Geneva was keen to take any opportunity to ensure benefits that would alleviate the suffering.  However, the intransigence of the Huthi militia has disappointed Yemenis regarding any progress that could be made.

Yemen is fully ready for a sustainable peace based on national, regional and international terms of reference, he said, adding that it is not an advocate for war and vengeance.  The State should be restored and the coup ended.  But peace cannot be obtained by cajoling gangsters as some Member States do, rather by implementing international resolutions.  Member States should abide by Security Council resolution 2216 (2015), which calls on the Huthis to withdraw and hand over their weapons.  He called on the Security Council to act resolutely in implementing its resolution to ensure a political transition in Yemen.

He then underlined his Government’s efforts to protect civilians, especially women and children.  The Government has instructed the various units of its army not to recruit children, but rather strive to protect them and to rehabilitate those that have been detained while in the ranks of the rebels.  The economic hardship felt by Yemen is due to the militias that have wasted resources and reserves.  In the face of that, and to stop the continued deterioration, the Government has introduced measures, including the setting up of an economic commission which has been authorized to take all measures to stop the deterioration of the currency.

Despite limited resources, Yemen continues to participate in the fight against terrorism and the Government will not step back from any measures that would counter the financing of terrorism and money laundering, he stated.  In the twenty-first century, the rule of the mullahs could no longer be accepted, as represented by the Huthi militias that want to see a return to the dark days of despotism.  His country would continue to strive and leave no stone unturned to restore peace and security.  He offered his thanks to the Government of Saudi Arabia, which had played a key role in alleviating the humanitarian crisis in Yemen, and also added his thanks to humanitarian organizations in the Arab coalition countries and various United Nations bodies for their exceptional humanitarian efforts.