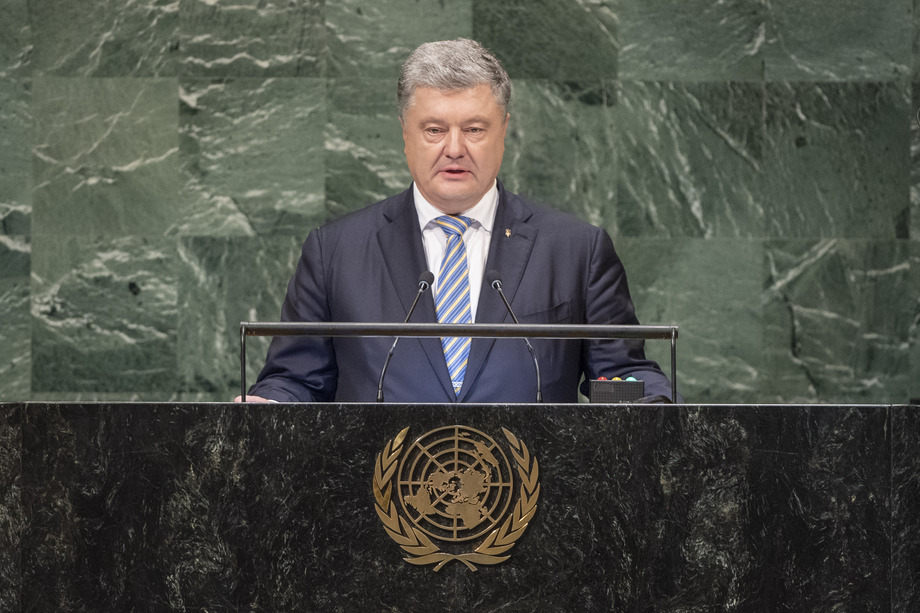 PETRO POROSHENKO, President of Ukraine, said that the international security environment seemed rock solid just two decades ago.  Now it has descended into a volatile and increasingly disturbed state where both traditional and hybrid threats are challenging the stability of our societies.  On 24 and 25 September, several families were again struck by grief, as their loved ones perished under Russia’s hostile attacks.  “Moscow turns Ukrainians to orphans.  It tortures our patriots in its prisons,” he said.  Over 1.5 million people have been displaced since 2014.  Russia’s hostile attacks have also poisoned the Ukrainian soil and have caused an environmental disaster not only in the occupied Crimea, but in Donbas as well.

Ukraine has made a sovereign decision to live the way it wants and to promote the free world’s democratic values, he continued, adding:  “Russia punishes Ukraine for this decision.”  It kills, ruins homes and lives on an industrial scale.  He urged the United Nations to speak up for Ukraine’s rights.  It has proven again and again that staying comfortably silent when international norms are breached does not stop but encourages the offender to continue destructive policies.  “Your silence is exactly what the Kremlin weaponizes against Ukraine and, ultimately, against all of us,” he said.

In the absence of a strong and united reaction, irresponsible and selfish actors resort to the tactic of further escalation, he said.  “Ensuring responsibility is never an easy feat,” he added.  Nothing will stop Moscow from continuing its aggressive expansionist policies if it does not face a united stand from the international community.  A lack of punishment certified that after Georgia came Ukraine and after Aleppo came Idlib.  Brutal actions must be rejected as illegal.  The responsibility for fixing the current state of affairs rests on all.  That is why Ukraine introduced the item “The situation in the temporarily occupied territories of Ukraine” into the Assembly’s current session.

He said that progress on Security Council reform is essential, expressing support for launching text‑based talks within the intergovernmental negotiations.  After the failure of the United Nations to prevent aggression against Ukraine, his country had hoped that the Organization would help settle the conflict by deploying peacekeepers.  “We firmly count on further progress on this important issue,” he said, adding that Ukraine has prioritized multilateralism by turning to support from the United Nations, the Organization for Security and Cooperation in Europe (OSCE) and the Council of Europe.

“Moscow shall feel the strength of the rule of international law,” he continued, recalling the several legal cases Ukraine initiated against Russia in international courts.  Yet, Russia continues to ignore relevant rulings, he continued, welcoming the efforts of Australia and the Netherlands to bring Russia to account.  He called on Member States to strengthen their efforts in demanding respect for human rights in the temporarily occupied Crimea through the adoption of various Assembly resolutions.  “This is the thing about today’s Russia:  they don’t care,” he said, adding that Russia is careless about suffering, the truth and the law.  “It is up to us to make them care,” he added.