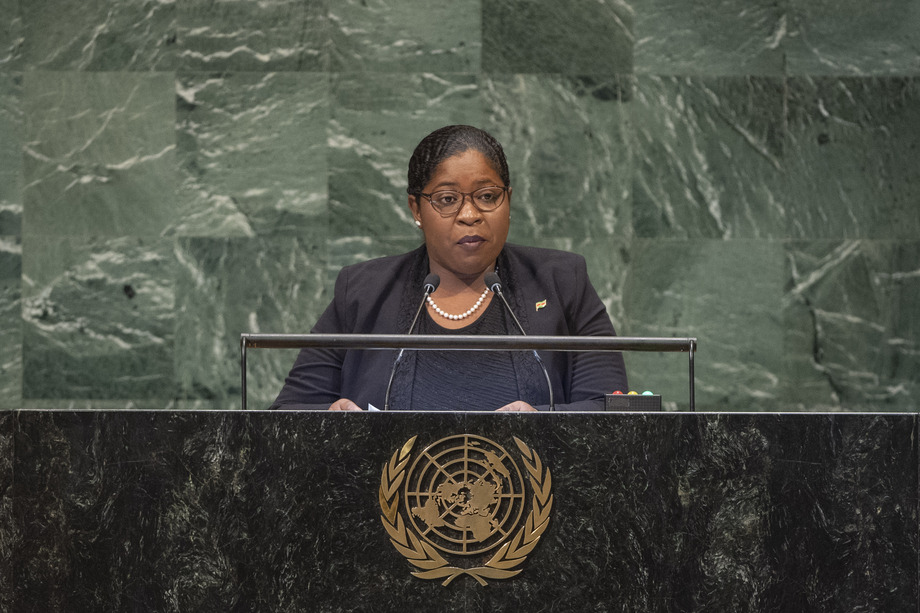 YLDIZ POLLACK-BEIGLE, Minister for Foreign Affairs of Suriname, said a rules‑based world order with the United Nations at its centre is needed to address global concerns.  Noting that the mitigation of climate change requires the mobilization of funds, she pointed out that Suriname is among the most threatened countries that are directly impacted by the rise of sea levels.  Approximately 80 per cent of its population resides in the coastal area, where its main productive activities are also concentrated.  The forces of nature which recently struck again in the Caribbean and elsewhere are evidence the international community must move beyond the rhetoric and take immediate action.

As a commodity‑based export economy, Suriname is facing economic challenges, she noted.  The downturn in gold and oil prices three years ago and the closure of the century‑old bauxite operations in 2016 have caused the economy to contract.  The Government lost a third of its fiscal revenue.  It put in place significant reforms that have borne fruit, but the country still faces obstacles that are unjustifiable, notably its classification as a middle‑income country.  This classification based on gross domestic product (GDP) per capita does not reflect her country’s vulnerabilities.  “We strongly reject this unrealistic classification which disregards the full set of challenges that we face,” she stated.  Underlining that access to concessional financing is critical, she said an atmosphere of trust and political will is crucial to address all matters of concern through dialogue.

Suriname contributes significantly to the mitigation of the effects of climate change through its high forest cover and low deforestation rate, she pointed out.  Yet, global commitments based on the principle of common but differentiated responsibilities have yet to be materialized.  What is more, Suriname does not fully benefit from global arrangements associated with sound forest management even though it stores 18 per cent of tropical forest carbon.  In that context, her country will host a high‑level conference on climate finance mobilization in February 2019, aiming to initiate and implement new models of eco‑sustainability to improve the quality of life for all.

Due to its open borders, Suriname is strengthening its cooperation with adjacent and other countries to effectively combat transnational organized crime and its consequences, she continued.  International cooperation has been solicited to protect her country’s unique biodiversity that is threatened by poaching and the illegal trade in endangered species.  Regarding trade, she said it is reprehensible that economically powerful countries resort to unilateral sanctions when they encounter ideological, political or trade differences, and voiced disapproval for the continuation of the financial and commercial embargo against Cuba and its people.  Reaffirming that multilateralism remains essential, she stressed the need to make the United Nations more relevant by making it more democratic, transparent and accountable.