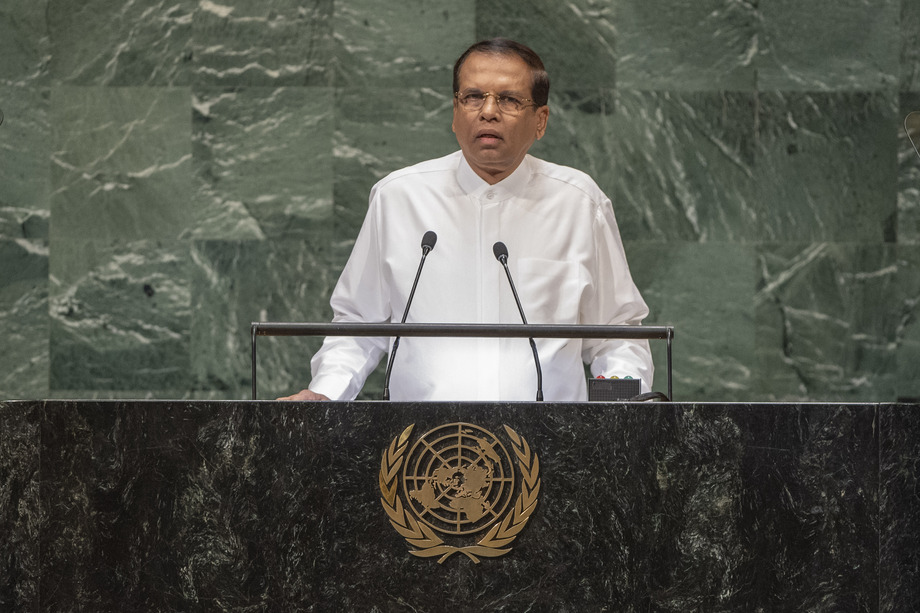 MAITHRIPALA SIRISENA, President of Sri Lanka, noted that his country as a Member State of the United Nations has always acted in accordance with treaties and conventions of the Organization.  He pointed out the satisfying progress Sri Lanka made in the last three and a half years.  Noting the emperor‑like power the executive presidency possessed, he said he handed it over to the Parliament, and by so doing, democracy, the independence of the judiciary and freedom of the media have all been strengthened.  Sri Lanka today is entirely different from the past, he stressed.

Recalling responsibilities and duties, he pointed to the prevalent issue of refugees as being very complex.  Even though the United Nations and other organizations support refugees, he said, efforts must be more expansive.  Sri Lanka, following a non-aligned foreign policy, has no enemies in the world.  He voiced concern about the situation of the Palestinian people, which required greater attention, adding that he supports their struggle for freedom.  He called on the United Nations to be more involved in fighting poverty, adding that hundreds of millions of people spend their day in hunger.  He pointed out that the world faces many challenges in alleviating poverty and battling the consequences of climate change, saying that many efforts are needed by the heavily affected countries to be prosperous.  He listed drug problems and the issue of pharmaceuticals as additional problems in their society.

He mentioned the 24 September meeting of the United Nations with the President of the United States on the global call to action on the world drug problem.  Efforts are required by every country in fighting illicit drugs.  He highlighted the utmost importance of the Paris Agreement, adding that his country ratified it and will take necessary actions.  Concerning the conflict of the last 30 years, he pointed to the actions they took to consolidate democracy, protect human rights, strengthen national reconciliation and achieve economic prosperity, mentioning the massive transformations of the last 10 years.

He stressed that the independence of a nation is of utmost importance.  To continue the process of reconciliation, he said, we do not want any foreign Power to influence us, adding, as Sri Lankans, we will find solutions to our problems, we simply need room to resolve them and the support of the United Nations.  He also said that the new generation deserved to be heard.  The international community should look upon Sri Lanka from a fresh perspective as it is different today.