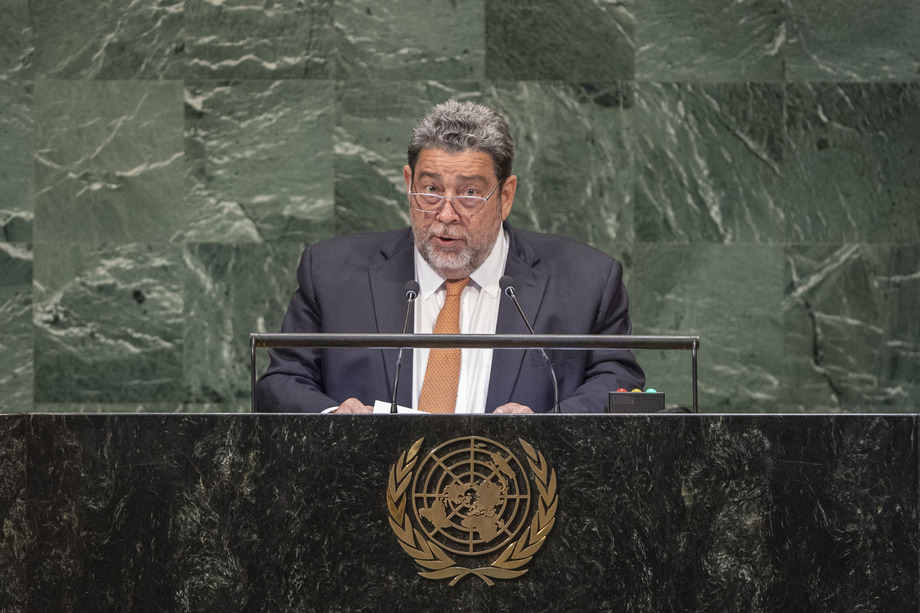 RALPH E. GONSALVES, Prime Minister of Saint Vincent and the Grenadines, said the adverse effects of the 2008 global economic and financial crisis have been far-reaching, especially for the countries least responsible for it.  The financial architecture has been reassembled with little more than cosmetic changes; economic difficulties have caused many nations to look inward; craven demagogues have exploited economic hardship; and illiberal intolerance has risen in all corners of the world.  “Solidarity has been sacrificed on the altar of political expediency,” he said, underlining the need for integration, cooperation and consensus building.  While acknowledging this context demands that the United Nations systemic flaws be urgently addressed, he stressed that the Organization remains the only institution with the authority and capacity to enable global cooperation.

The principles of non-intervention and non-interference are of particular importance to small island developing States, given that they lack military might and wealth and are constrained within narrow borders, he continued.  Every violation of the principle of non-intervention is an indirect assault on their survival.  Consequently, his country stands firmly against interventionist assaults on the sovereignty of Cuba and Venezuela.  He called for a resumption of respectful dialogue between the United States and Cuba.  Furthermore, unwarranted and illegal intervention in Venezuela is an impediment to the people’s quest for peace, democracy and liberty.  “The peoples of Latin America and the Caribbean have repeatedly reaffirmed that our region is a zone of peace.  Our peoples are not the pawns and playthings of any nation,” he stated.

“Beyond the headlines, the story of climate change is grimly told in daily experiences of floods, droughts, landslides, coastal erosions, lost lives and livelihoods across our region,” he said, describing climate change as a multifaceted existential problem.  The prospects for an effective international solution are receding.  He called for the concept of small State exceptionalism to be placed at the centre of global discourse and responses addressing climate change.  Major emitters that fail to set and honour ambitious mitigation pledges are committing a direct act of hostility against small island developing States.  Decisive political and development action is urgently needed.  Global climate accords have placed promised support at the centre of an impenetrable web of rules and processes that frustrate those most desperately in need of cooperation.

The international commitment to the Sustainable Development Goals suffers from the lack of tangible global efforts, he underscored.  However, his country has embedded them in its national development plans and created a Zero Hunger Trust Fund and a Disaster Contingency Fund.  As it continues to seek new avenues for people-centred development and economic growth, the spectre of trade wars looms, and its banking and financial industries face increasing procedural impediments.  Manipulating States’ access to global banking and finance mechanisms violates the internationally recognized right to development, he emphasized, urging the United States to confront this grave issue.

Highlighting his country’s active participation in the work of the United Nations, he said the need for principled pragmatism on the Security Council requires that its membership be reformed to better reflect modern realities and challenges.  “The relevance of this institution is rooted in its responsiveness to the needs and challenges of the peoples we collectively represent,” he stated.  He pointed out that the United Nations remains blind to the 23 million residents of Taiwan even though there is no principled basis to deny it the right to participate in the work of the specialized agencies of the Organization.  He also called for practical resolutions to the pain and suffering of the Palestinians and the people of Yemen.