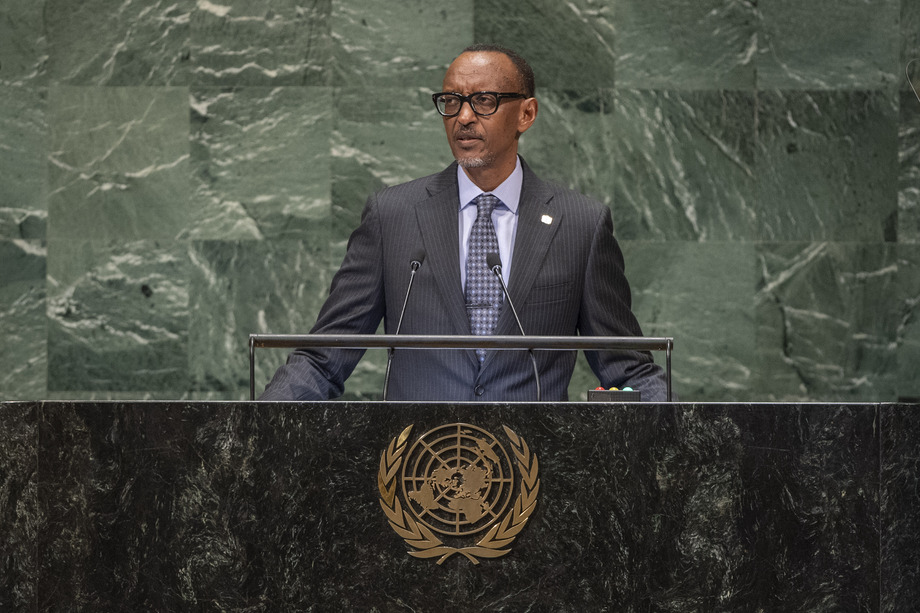 PAUL KAGAME, President of Rwanda, spotlighted the paradox represented by both Africa’s deep sense of transnational solidarity and its frequent division and dysfunction.  “This left Africa unable to articulate and advance our common interests,” he said, adding:  “We ceded responsibility for our futures to others, not by force, but by default.”  However, he emphasized that times are now changing rapidly, and Africa’s global position must also change.

He went on to say that the continent’s current trends are towards closer and more productive cooperation, both through the African Union and regional economic communities.  Recalling that the former recently initiated major financial and institutional reforms, he said that practical results are already being seen.  The African Union’s budget is 12 per cent lower than in 2017 and the share of funding supplied by its member States has increased substantially.

Early in 2018, the historic African Continental Free Trade Area was signed, representing the culmination of decades of effort, he continued.  Once in force, Africa’s place in the global economic and trade architecture will be redefined.  Economies of scale and higher levels of intra-African trade will help the continent attain the 17 Sustainable Development Goals by 2030.  Underlining the importance of crucial developments in the Horn of Africa — where leaders have set aside decades of mistrust to work towards comprehensive settlements — he said the Security Council must work closely with the African Union to accompany that normalization process.

Turning to other situations on the continent, such as those in the Central African Republic, Libya, the Sahel region and South Sudan, he said Africa and the world should come together to harmonize overlapping initiatives and ensure that agreements are respected.  African countries stand ready to embark on a new chapter of cooperation between the continent and the United Nations, based on the stable funding of African Union-mandated peace support operations.  In that regard, he noted that a resolution slated to be introduced by Africa’s three present Security Council members enjoys the full backing of the African Union and will align with the Secretary-General’s new Action for Peacekeeping initiative.

“The dividend of a more focused and functional Africa benefits everyone,” he continued, emphasizing that against the backdrop of stronger partnerships the African Union’s representation at the United Nations must be accorded the same status and weight enjoyed by other major regional bodies.  Making the United Nations relevant to all people requires a commitment to achieving real multilateralism where it has too often been lacking.  Indeed, the current two-track system of global governance — in which a few define the norms by which others will be judged — is unsustainable.  “Standards that do not apply to everyone, equally, are not universal,” he warned, adding:  “Addressing this imbalance in the very foundation of our system is what will give shape to a revival of multilateral cooperation.”