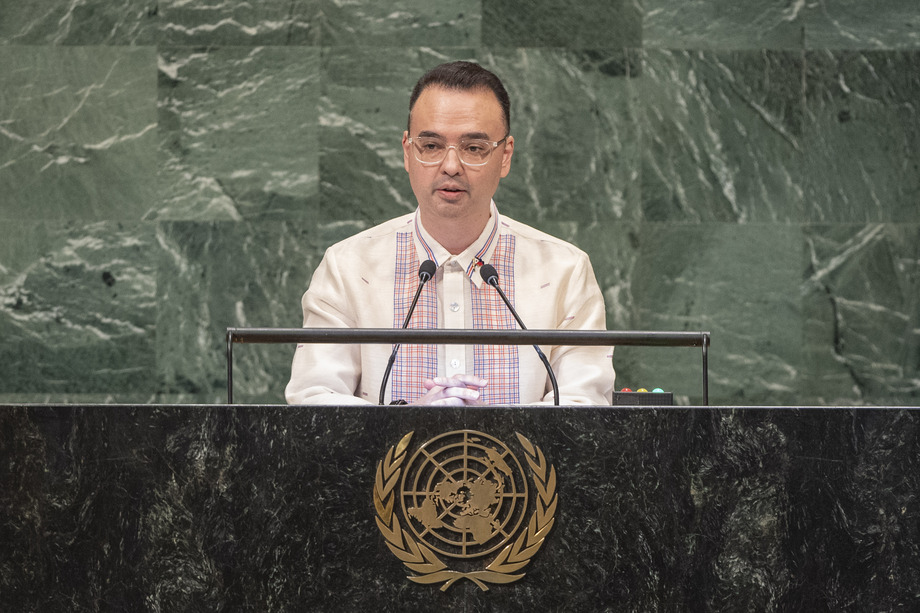 ALAN PETER S. CAYETANO, Secretary for Foreign Affairs of the Philippines, said that beginning in childhood everyone is told stories that inspire a spirit of idealism that can change the world, the same idealism people feel as they enter the United Nations.  Unfortunately, among some, idealism becomes the victim of pragmatism, morphing further into a lack of desire to try new solutions for existing problems and an unwillingness to solve problems by consensus.  Approaches that simply repeat what has already been done plague many at the United Nations.

Tools like the Internet and social media allow for real time communication, he continued.  All people on Earth are now neighbours, members of the global community.  Therefore, efforts are needed to promote commonalities that define all people as global citizens, as people of the United Nations.  He stressed there are many problems that can only be solved by a united global community.  Issues ranging from climate change to terrorism call for international unity and for pragmatic idealism that instils hope.

Migration is a reality, he asserted, urging all to “love thy neighbour”.  Those issues must be discussed openly, frankly and thoroughly and the Global Compact on Migration is a huge step in the right direction, he said, thanking all parties that contributed to its formulation.  Migrants inspired global leaders to create the first intergovernmentally negotiated compact on the matter.  Under the leadership of President Rodrigo Duterte, the country is uncompromisingly working to promote the rule of law and to foster a just and equitable society that protects human rights.  As a sovereign and democratic State, Philippines is preventing its deterioration into a narco‑State.

Hunger for change, peace and law and order is genuine, he asserted, adding that economic reform is under way to ensure poverty does not force Filipinos to seek employment abroad.  The Government is instituting reforms in order to protect every single citizen.  When forced to choose between protecting the rights of law‑abiding Filipinos or the rights of drug lords and criminals, the Philippines will always defend the former.  The United Nations is a venue of great opportunity as long as States can transcend national interests for the good of the global community.  Making the United Nations relevant to all is a dream worth fighting for.