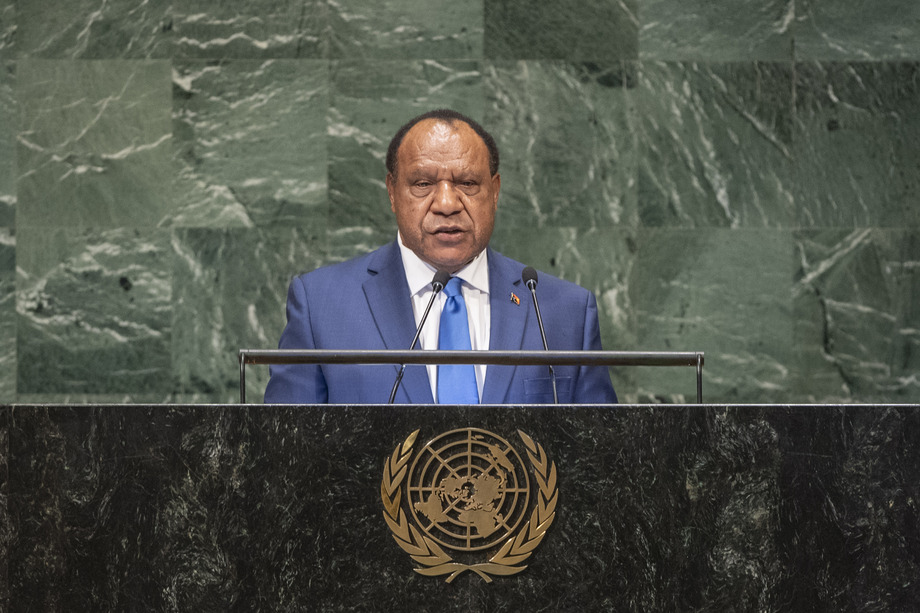 RIMBINK PATO, Minister for Foreign Affairs of Papua New Guinea, said his country was set to host the Asia‑Pacific Economic Cooperation (APEC) Forum and emerge onto the global stage like never before.  As the largest Pacific island economy, Papua New Guinea, with its rich natural resources, is joining other countries in the region to protect the ocean.  The Forum seeks to promote prosperity through trade, protect the environment, foster inclusive policymaking and defend gender equality.  Further, international trade is an important engine for inclusive economic growth and poverty eradication, he said, calling for respect of the rules‑based multilateral trade system.

Marking the forty‑third anniversary of Papua New Guinea’s independence, he said efforts continue to consolidate economic and structural reforms; the country’s economic outlook is positive.  The 2030 Agenda for Sustainable Development is a solid pathway towards improved livelihoods.  His Government recognizes the importance of putting in place the building blocks needed to enable inclusive and participatory development.  Creating employment opportunities is essential to addressing the needs of the country’s youth.  In addition, one of the greatest challenges facing the country is ensuring women and girls enjoy full equality.  To that end, legislation is in place to combat gender‑based violence.

Guided by the Paris Agreement, regional leaders are reaffirming their strong commitment to work together to combat the adverse effects of climate change, he continued.  Papua New Guinea recently experienced a tragic and unprecedented earthquake which killed nearly 200 people and displaced 600,000.  The event destroyed vital infrastructure and resulted in an economic slowdown, he noted, thanking international partners who have provided assistance and are helping revamp disaster response plans.  He also welcomed efforts to replenish climate finance in the Green Climate Fund, stressing that improved access to financing is especially important for small island developing States.

Papua New Guinea remains committed to the 2019 referendum in the autonomous region of Bougainville as outlined in the Bougainville Peace Agreement.  His Government welcomes the easing of tensions in the Korean peninsula and commends efforts to encourage peaceful dialogue.  Providing an update of the status of refugees and migrants on Manus Island, he said the Island’s migrant processing centre officially closed last year and efforts are under way to resettle qualified asylum seekers.  Efforts are also under way to combat illegal, unregulated and unreported fishing in the country’s territorial waters.  The Pacific Islands Forum is working to secure the region’s maritime borders and eliminate marine litter.  He urged the international community to engage with Pacific island States according to accepted international norms so the region can be characterized by stability and security.