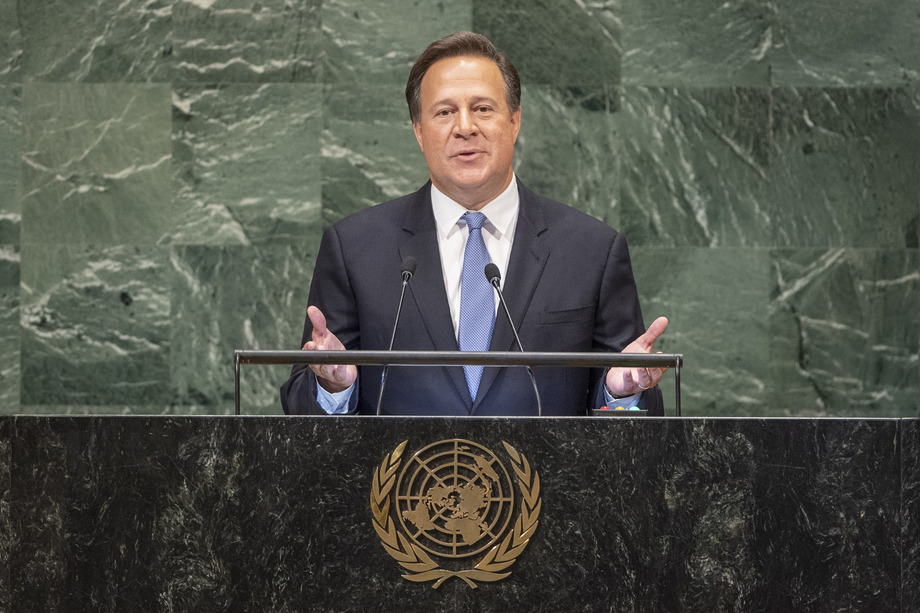 JUAN CARLOS VARELA RODRÍGUEZ, President of Panama, highlighted the extensive progress made in his country towards achieving the Sustainable Development Goals, which was adopted as a State policy.  By tackling corruption head-on, improving housing, access to education and potable water, in four years Panama, among other successes, was able to rebuild entire cities and bring 150,000 of its citizens out of poverty.  As well, preventive health treatment programs were instituted in response to a national health census and the Panamanian education system is being transformed into one that is bilingual.

He also spotlighted the successful completion of the Canal expansion which illustrated his country’s permanent neutrality and openness to international trade.  The Canal, an interoceanic route, was recovered by the Panamanians thanks to the treaties of the Panama Canal, and the decision of the former President of the United States, Jimmy Carter.

Noting that his country has welcomed tens of thousands of people looking for a better future, he brought attention to the plight of migrants in the region, notably the 100,000 Haitians who fled their country after the earthquake.  Further, the lessons of the migratory crisis are a call to the Government of Venezuela to re-establish dialogue and democracy.  Migratory movements can only be resolved by dealing with the root causes that compel these people to leave their country, underscoring his country’s participation in the Global Compact for Safe, Orderly and Regular Migration.

Warning that violations of human rights and fundamental liberties in Nicaragua could generate additional migration movements, he also called on that Government and the country’s social actors to renew the political dialogue and thereby find peace.  As well, the United States should recognize the steps taken by Cuba to open its economy.

The political crisis in Venezuela, the increase in drug production in Colombia, the scourge of corruption, and the tense situation in Nicaragua require that countries in the region redouble their efforts to return to the path of social peace, he said.  His country is committed, together with multilateral organizations, to work for a better world.  Towards that end, the Regional Logistic Centre for Humanitarian Assistance will be inaugurated in Panama.  Concluding, he stressed that in the future, the question will not be “how power is obtained but how it is used for the benefit of the people”.