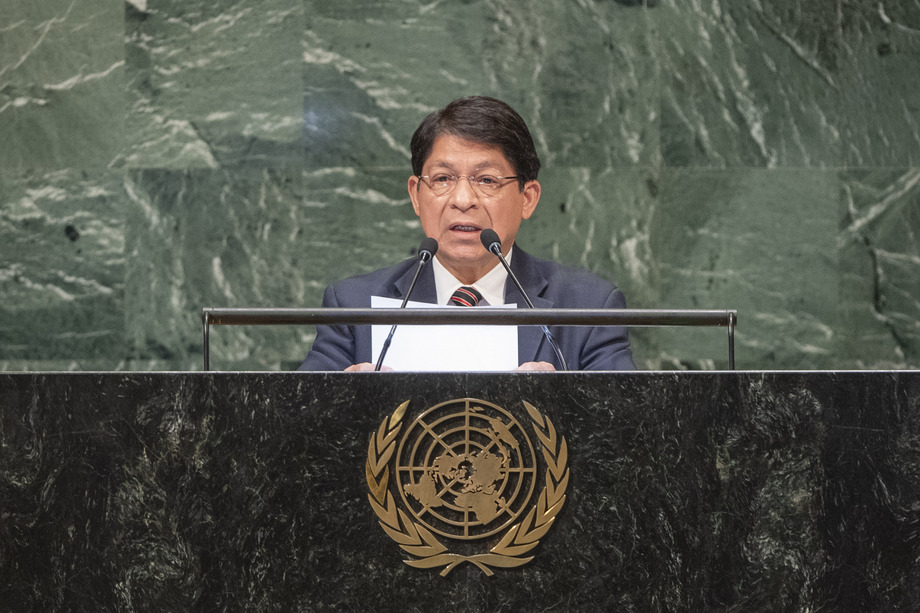 DENIS RONALDO MONCADA COLINDRES, Minister for Foreign Affairs of Nicaragua, said that three years after the adoption of the 2030 Agenda, the world is witnessing a crisis caused by savage capitalism, interference and violations of international law.  His Government resisted an attempted coup d’état and is fostering peace and fraternal coexistence.  Comparing the coup’s attempt to interventionism, he said that terrorist activity in the country was conducted under the guise of peaceful protests.  Nicaragua stands for stability, peace and security in the region and is characterized by positive economic, political and social indicators.  He reiterated that Nicaragua loves peace and promotes and defends human rights.

Nicaragua and its people defend the principles of independence and sovereignty, as established by the United Nations Charter, he continued, demanding the cessation of any interventionist policy that violates international law.  The Government is working in a sustained manner to achieve the goals of the 2030 Agenda and the country is experiencing economic growth.  In addition, the national poverty rate decreased from 42.5 per cent in 2009 to 24.9 per cent in 2016, he pointed out, warning of efforts by the United States to curb social, economic and social development in Nicaragua.  He denounced that country’s move to introduce legislation that will order international financial organizations to oppose the granting of loans to Nicaragua.

International peace requires complete nuclear disarmament, he underscored, voicing his support for the denuclearization of the Korean Peninsula and adding his hope that nuclear weapons will be dismantled in a complete, verifiable and irreversible manner with the international community contributing to lasting peace in the region.  Nicaragua also supports nuclear negotiations with Iran and the Joint Comprehensive Plan of Action; that agreement demonstrates that dialogue and diplomacy are the best means to solve such problems.  He also condemned the blockade imposed on Cuba and assassination attempts against the President of Venezuela.  Noting the importance of supporting decolonization, he voiced his support for a two‑State solution to the Israeli‑Palestinian conflict and for the Government of Syria in its fight against terrorism.

Calling for the reinvention of the United Nations, he said that process will transform the Organization into one that serves the interests of all its members.  Furthermore, urgent action is needed to combat climate change.  In that regard, the principle of common but differentiated responsibility remains in force.  Major greenhouse gas emitters must contribute to the recovery of the planet.  Achieving the Sustainable Development Goals calls for the rejection of unilateral coercive measures that impede development.  The international community must work for peace, respect, dialogue and sovereignty as part of a United Nations transformation process.  Affirming Nicaragua’s commitment to fight for peace, he asserted that conflict can be overcome through dialogue.