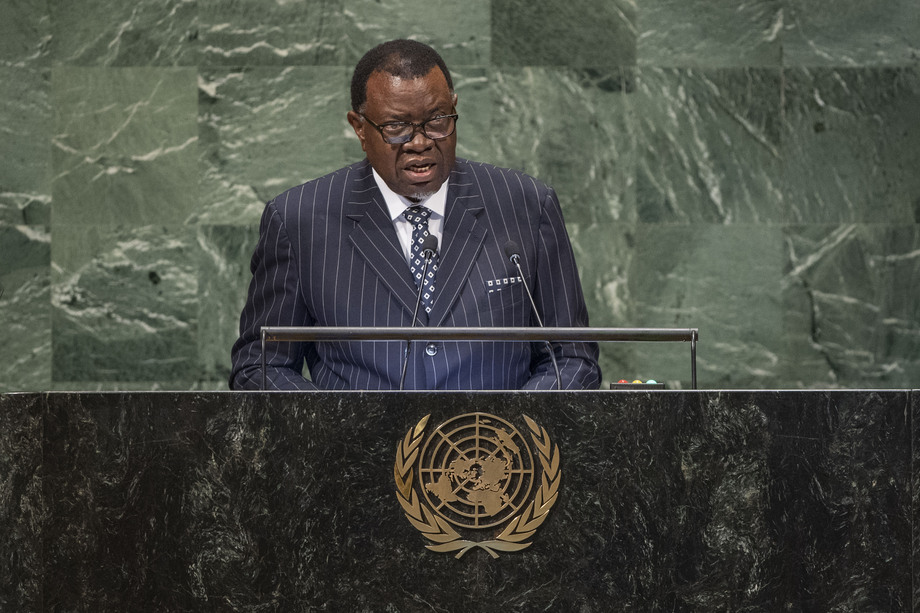 HAGE G. GEINGOB, President of Namibia, said that, since the end of the cold war, “the world has slowly drifted ever more worryingly towards unilateral action”.  This development goes against one of the fundamental tenets of democracy upon which the United Nations is built.  Democracy might have its flaws, he noted, but it is by far the best system, enabling the key values of the United Nations necessary for sustained inclusive development.  It is for this reason that multilateralism must be embraced with greater urgency.

Namibia is founded upon the principles of democracy, the rule of law and justice, he continued.  The fundamental rights and freedoms enshrined in its Constitution include virtually all the rights and freedoms recognized in international human rights instruments.  However, these instruments in themselves are not sufficient to bring about sustainable development.  There are emerging threats and challenges that continue to frustrate individual and collective efforts to achieve greater socio-economic progress.

As a dry and arid country, Namibia has stepped up its efforts to implement the Sustainable Development Goals in critical areas, such as energy, water and terrestrial ecosystems, he said.  In July 2018, it presented its Voluntary National Review on the implementation of the Goals, its first opportunity on the world stage, to show progress made in implementing the 2030 Agenda on Sustainable Development and complementing the African Union Agenda 2063, in pursuance of the “Africa We Want”.

However, communicable diseases threaten to jeopardize the attainment of the 2030 Agenda, he underscored.  For this reason, he endorsed the call to end the tuberculosis endemic and reaffirmed his country’s commitment to unite with the world in achieving this goal.  His Government has demonstrated its commitment to address tuberculosis by including related targets in its fifth National Development Plan, as well as by ensuring that 70 per cent of available funding for tuberculosis comes from domestic resources.  However, inadequate human and financial resources, high levels of poverty, and lack of public health services in rural areas remain a concern.

He emphasized that excluding women from certain spheres of life is to waste skills and expertise that can contribute to sustainable development.  He applauded the United Nations Secretary-General for exercising leadership and reaching gender parity among senior management and resident coordinators.  Namibia is also fully committed to implementing gender equality, as evident in the important role that women play in the country’s politics where they are equally represented in the Executive and Legislature.  He also noted that during the darkest days of his country’s fight for independence, the Government and people of Cuba came to its aid.  It is in the spirit of profound kinship Namibia shares with that country that he renewed the call for the lifting of the decades old, outdated, ineffective and counterproductive economic and financial embargo of Cuba.