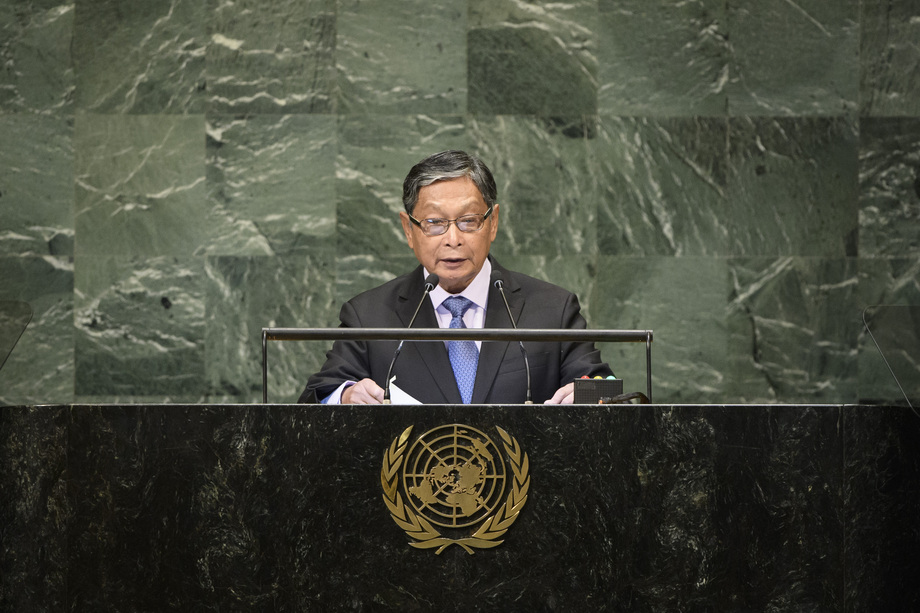 U KYAW TINT SWE, Union Minister for the Office of the State Counsellor of Myanmar, noted his country’s efforts to transform it from an authoritarian system to a democratic one and its effort to bring about sustainable development and build a society where stability, peace and harmony prevail.  The ethnic strife and armed conflicts in Myanmar can only be ended through political means.  During the past year, two more ethnic armed groups, namely the New Mon Party and the Lahu Democratic Union, joined the peace process by signing the Nationwide Ceasefire Agreement.  “Human rights and inclusiveness are fundamental to the successful transformation of Myanmar into a democratic society,” he said.

Resolving the issue in Rakhine is an important component of Myanmar’s democratic process, he said.  Barely a month after the Advisory Commission on Rakhine was established, an extremist terrorist group called AqaMul Mujahidin launched attacks on three border police posts in Northern Rakhine State.  “The attacks were premeditated, well organized and designed to invoke fear among the inhabitants,” he said.  The Commission’s final report contained 88 recommendations towards achieving lasting peace and stability in Rakhine.  Within hours of its release, terrorists carried out attacks on police and the army, opening a new chapter of fear that led to a large outflow of refugees.

“We sympathize deeply with these displaced persons especially women and children and have taken steps to effect the early repatriation of all displaced persons from Rakhine, who are verified as residents of the State,” he continued.  Myanmar has made the necessary preparations in line with bilateral agreements and has been ready to receive verified returnees from Bangladesh since 23 January.  He called on Bangladesh to fulfil its commitments in accordance with bilateral agreements, to allow, without delay, the return of verified persons under voluntary, safe and dignified conditions.  Several people who have already returned have been registered, processed and are now with their families, he said.

He expressed serious concern over the report published on 27 August by the Human Rights Council’s fact‑finding mission on Myanmar.  From the very beginning, Myanmar objected to the formation of the mission due to its Government’s serious and genuine concerns over its composition and mandate.  “Accountability must apply equally to all,” he said, also recalling Myanmar’s rejection of the International Criminal Court’s ruling of 6 September in connection with the Rakhine State.  His nation is not a party to the Rome Statute, and the Court has no jurisdiction over Myanmar whatsoever.  Such action can only erode the moral and legal authority of the Court.  While the Government is unable to accept this legally dubious intervention, it fully commits to ensuring accountability where there is evidence of human rights violations committed in Rakhine State.