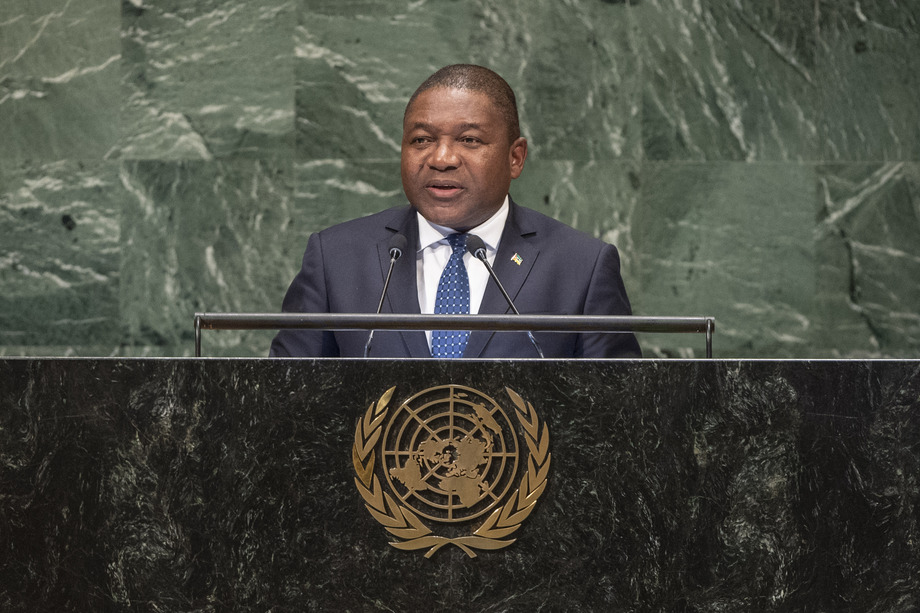 FILIPE JACINTO NYUSI, President of Mozambique, acknowledged the role of the United Nations in promoting dialogue and solving conflict, as a forum for multilateral dialogue in globally assumed agendas.  Saying “an unequal and fractured world requires multilateralism to address its gaps”, he cited the implementation of the Paris Agreement and efforts to eliminate nuclear weapons and to regulate migration.  With the promotion of human rights, good governance and financing for development as key points, he called for support of the Secretary-General’s reform of the United Nations system so the Organization can be adequate to its purpose.  Commending the Secretary-General’s inclusive approach, he said Member States must resolve differences for more effective cooperation.

Expressing deep concern for flashpoints and conflicts in Africa and the Middle East, he said Mozambique also follows tensions on the Korean Peninsula.  Fighting recruitment and financing of terrorist groups will aid development.  His country supports self-determination for Western Sahara and the two-State solution to resolve the Palestinian issue.  Appealing for the normalization of relations between Cuba and the United States, he said that he is personally committed to the search for peace.  In his own country, he started dialogue that led to consensus and approval of an amendment to the Constitution introducing an innovative approach to resolving conflicts, a milestone in the history of his nation, meaning the next elections will be held without armed parties.  Those elections will prove Mozambique’s commitment to democracy, but the country still needs more assistance in disarmament and demobilization.  While committed to peace, he resolves to continue the fight against organized crime which threatens development, aiming to neutralize criminals in the northern regions, as we cannot think about human rights when the very right to life is jeopardized.

Aligning his country’s national agenda with the 2030 Agenda, he said this will lead to a just, equitable society and broaden social justice in his nation, particularly for women and youth “and not leaving anyone behind”.  Social justice requires gender equality, and his country has made significant strides in that domain, also prioritizing access to food, water, nutritional security and sanitation.  Increasing productivity and livestock will also help achieve the Sustainable Development Goals.  While stating that corruption remains a scourge, his Government has worked for good governance, strengthening institutions and respecting the separation of powers.

As one of the countries most exposed to the effects of climate change, he said Mozambique continues to take measures in accordance with the Paris Agreement, devoting 25 per cent of its territory to the conservation of biodiversity, developing renewable energies in rural areas and working to ensure the protection of ecosystems and sharing of benefits.  Appealing for international cooperation in sharing technological means, and reiterating the unconditional commitment of his country to the critical role of the United Nations in solving humanity’s problems, he called for continuing to be “faithful” to those ideals.