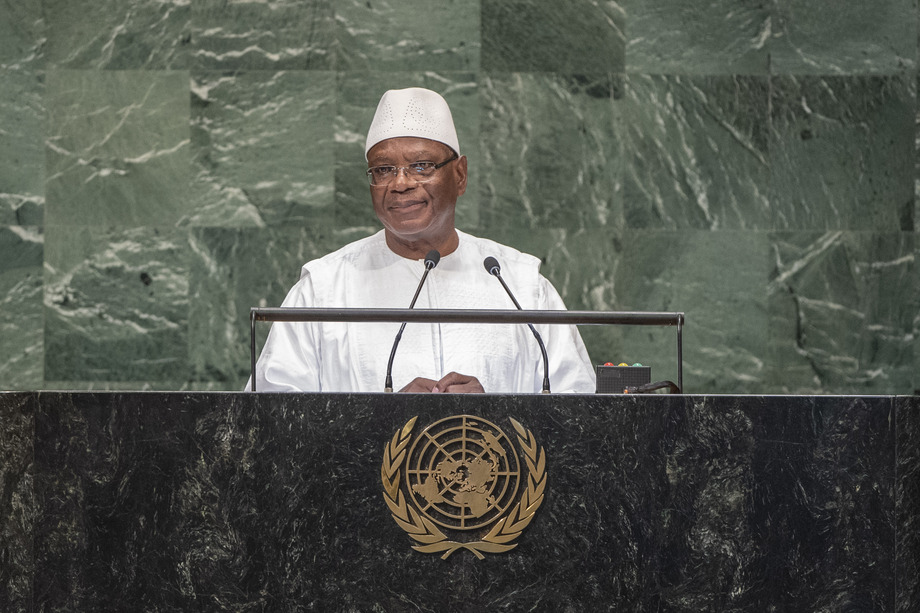 IBRAHIM BOUBACAR KEITA, President of Mali, paid tribute to the men and women of the United Nations Multidimensional Integrated Stabilization Mission in Mali (MINUSMA) for the commitment and sacrifice in a security context which is complex and difficult.  Underlining the collective responsibility to do more and to do better in order to render the Organization more relevant and efficient for all, he welcomed the reforms undertaken by the Secretary‑General in the sphere of development, peace and security.  In addition to these initiatives, the composition and working methods of key bodies of the United Nations, notably the Security Council and the General Assembly, also need to be reformed to better protect future generations from the scourge of war.

He recalled that, in spite of all the challenges it faces, Mali recently held elections within constitutional timelines.  This inclusive process enabled citizens to express freely their choices and proved the political, democratic and republican maturity of the Malian people.  He said he was going to work relentlessly to implement the Agreement on Peace and Reconciliation in Mali emanating from the Algiers process.  He also reiterated his steadfast commitment to dialogue and concertation in the management of public affairs and underscored the lack of confrontation and clashes between the Malian army and the armed groups since the signing of the accord in May and June 2015.

The Malian administration has returned to Kidal and other regions of the country, he noted, adding that this allowed for the opening of classrooms and the provision of basic social services in regions affected by the conflict.  However, political will alone is not sufficient to achieve all the commitments set out in the Agreement.  Stressing the need for technical and financial support, he appealed for the resources pledged by Mali’s partners to be mobilized in order to uphold the commitments set forth in the roadmap.  “The Malian people very much appreciate the solidarity provided by the international community through the presence and support of MINUSMA, the Barkhane French forces, G‑5 Sahel [Group of Five for the Sahel], African Union, ECOWAS and neighbouring countries,” he said.

The Sahel still faces terrorism, transnational crimes and various forms of trafficking, and the G‑5 Sahel was set up in 2014 in Nouakchott to combat these threats, he recalled.  Yet, he continued, “the joint G‑5 Sahel force is struggling to be operational because it lacks an appropriate mandate and, above all, appropriate funding”.  Expressing the view that combating terrorism in Sahel is a significant contribution to international security, he reiterated his call for the Security Council to authorize the deployment of this force under Chapter 7.  He further called on multilateral partners to honour their commitment to the G‑5 Sahel force.

Turning to other regional issues, he welcomed the normalization of diplomatic relations between Ethiopia and Eritrea and the conclusion of a peace agreement in South Sudan and expressed his appreciation for the recent legislative elections in Mauritania.  He expressed concern about the situation in Libya that negatively impacts the security and stability of the Sahel region.  In light of this situation, he called on the international community to bring the Libyan parties to foster dialogue and seek sustainable solutions to the crisis.  He also reaffirmed his country’s support for the Palestinian people in “its legitimate struggle to achieve self-determination”, and called on Israelis and Palestinians to resume negotiation with a view to setting up a two‑State solution in peace and within internationally recognized safe borders.