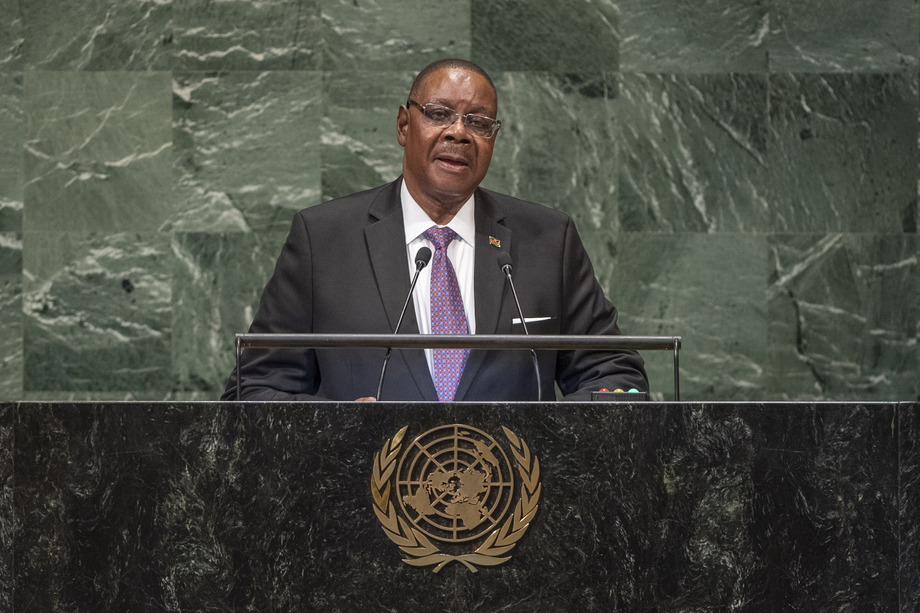 ARTHUR PETER MUTHARIKA, President of Malawi, urged the General Assembly to raise the flag of peace in honour of former Secretary-General Kofi Annan, asserting that peace must be guarded by all.  The Assembly cannot stand proud while people around the world are forced to abandon their countries and while innocent children, women and men are being killed.  Every human needs a home, every life is precious, he asserted, adding that there is a shared responsibility to seek and defend peace.

He said the relevance of the United Nations rests on its ability to satisfy the needs of people across the world, including Africans.  Every nation is important and every nation has something to offer.  However, those with more resources and power must step up and offer more.  Global leadership must be defined in terms of global responsibility and Malawi is prepared to fulfil its responsibilities and obligations, he said.

He acknowledged the sacrifices being made by United Nations peacekeepers and expressed pride in Malawi’s active membership in peacekeeping operations, including ongoing efforts in the Democratic Republic of the Congo.  He said Malawi supports United Nations efforts to galvanize international cooperation in promoting socioeconomic development and remains committed to the 2030 Agenda.  The priorities of the United Nations are also Malawi’s priorities.

The plight of refugees and migrants is a concern to the people of Malawi, he said, expressing his belief in the collective responsibility to ensure the protection of refugees.  Malawi is actively part of a United Nations initiative to develop a comprehensive refugee response framework to be rolled out within its national development strategy.  Turning to climate change, he said its consequences are real, devastating and often tragic and urged all relevant actors to fight for the bending of the curve of carbon dioxide emissions by 2020.

He said Malawi is endeavouring to eliminate hunger and malnutrition by 2030 and that inclusive economic growth is essential to reducing poverty.  Malawi’s economy has stabilized with inflation having been reduced from 24 per cent to the single digits and with its GDP expected to grow by 6 per cent in 2019.  He said Malawi supports United Nations reform efforts, including the call for two permanent, veto-holding seats for African States in the Security Council.  The United Nations cannot preach democracy while it itself is unrepresentative, he said, calling for the Organization to be relevant to all people.