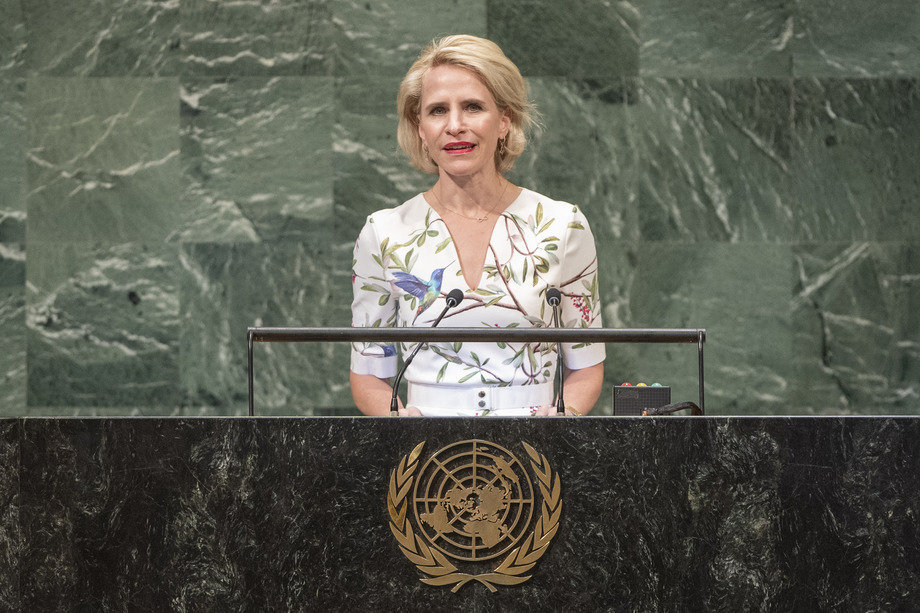 AURELIA FRICK, Foreign Minister of Liechtenstein, said that while it is a “great joy” to see a woman preside over the Assembly, it is also disappointing to see the United Nations so frequently miss the opportunity to make appointments that resonate outside the building.  Turning to climate change, she said:  “We ourselves have created a threat to our sheer existence — as the human race, as individuals.”  Climate change knows no national borders.  “Our very survival is at stake.  And yet, we are significantly behind what is necessary to do,” she added, underscoring that the Secretary‑General is right to sound the alarm.

“We need more United Nations, not less — more effective, more cooperation, more dynamic, more in tune with the times we live in,” she continued.  Wilful blindness, ignoring the realities, denying the facts and appealing to fear and resentment are recipes for disaster.  The questioning of international agreements and norms in the areas of trade, climate change, disarmament, migration and human rights have one common threat.  It undermines not just the contents of those agreements; it is also an attack on rules‑based order.

Expressing concern that the Security Council is “least functional when it is most needed”, she stressed the need to ensure accountability for the crimes committed in Syria.  For the atrocities committed against the Rohingya population, the International Criminal Court offers a path to justice.  From Syria to Myanmar to Venezuela, the Court is at the centre of the effort to fight impunity.  And yet, it continues to be attacked from different sides.  “More than ever, we need this Court,” she stressed.

She further expressed concern over the issue of modern slavery and human trafficking, noting that over 40 million people, mostly women and girls, live in servitude.  Liechtenstein has joined forces with Australia and others to help eliminate modern slavery and to ensure that perpetrators are brought to justice.  The 2030 Agenda is a step in the right direction to finally eliminate slavery.