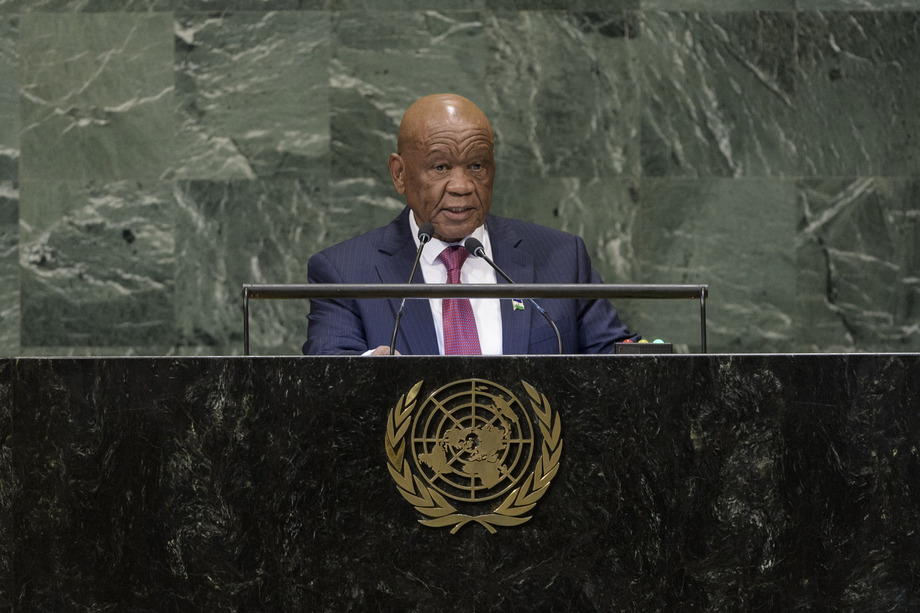 THOMAS MOTSOAHAE THABANE, Prime Minister of Lesotho, said the centrality and relevance of the United Nations cannot be challenged, from feeding over 104 million people in more than 80 countries annually, assisting millions of refugees, protecting women and children, fighting poverty and HIV and AIDS, and through peacekeeping.  The Organization had also worked with the Southern African Development Community (SADC) and African Union to help Lesotho change its trajectory of instability and volatility and enact a comprehensive national reform agenda.  He said his Government aims to “transform the Mountain Kingdom into a just, prosperous and stable country”.

He noted the important role of financing to achieve the goals of the African Union’s Agenda 2063 and Agenda 2030.  While acknowledging that ODA remains a catalyst, he advocated for robust domestic resources mobilization, while providing space for private sector investment.  The launch of an industrial hub in the north of Lesotho will eventually create 14,000 jobs.

Turning to migration, he said it offered opportunities to explore skilled and surplus labour.  His Government is working with international partners and has established a National Consultative Committee to develop a strategic plan on the issue.  He said plans include interventions related to the diaspora, as it is disturbing to see migrants worldwide facing challenges of unprecedented magnitude, and called on the international community to adhere to the Global Compact for Safe, Orderly and Regular Migration.  Peace and prosperity are impossible when women and girls are marginalized; their role in advancing the global development agenda must be enhanced.  It is equally important to avoid politicizing or redefining the protection of human rights or allowing the whims of a few powerful States to subject them to double standards.

Turning to Africa, he said the continent is more determined than ever to settle conflicts peacefully.  Pointing to the peace deal in South Sudan, he noted developments in the Horn of Africa offer hope for a prosperous, peaceful region.  Ethiopia and Eritrea have normalized relations, opening embassies in their respective capitals to usher in a new era of peace with concomitant economic, humanitarian and strategic implications.  However, the situation in Western Sahara, the only colony in Africa, is saddening.  Lesotho stands with the suffering Saharawi people.  Highlighting worsening situations in Syria, Iraq and Palestine, he called a two‑State solution the only viable option.  He also appealed for the embargo on Cuba to be lifted, reintegrating the country into the world trading system.

Stating that it is “indefensible and incomprehensible that decisions which bind us all are left in the hands of a few Member States”, he called for reform of the Security Council to take into account African aspirations as espoused in the Ezulwini Consensus.  Of equal importance, gains made in disarmament are being eroded, with small arms and light weapons flooding the market.  He noted the re‑emergence of the threat of weapons of mass destruction has left the United Nations paralyzed due to the size and power configuration of the Security Council, making the call for reform even more urgent.