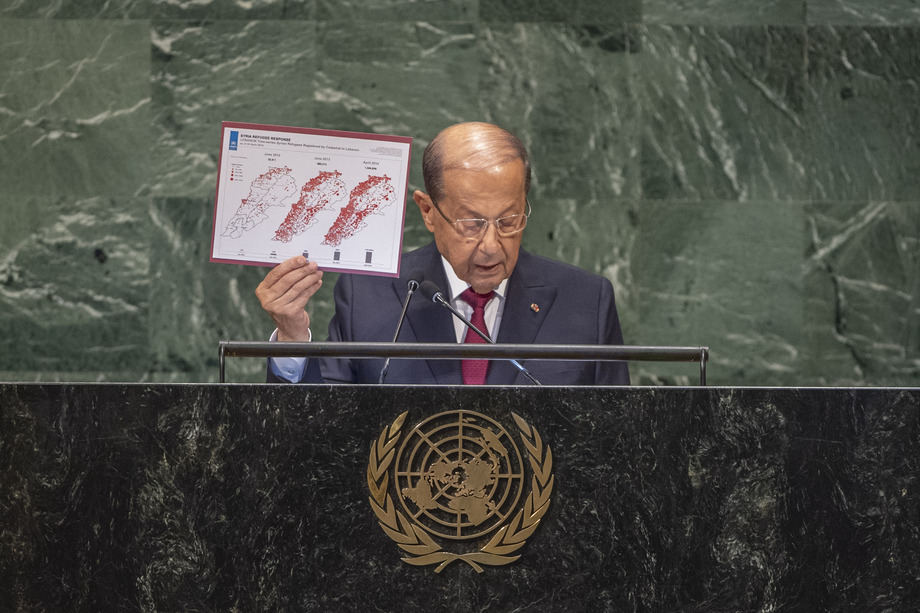 MICHEL AOUN, President of Lebanon, said that the United Nations must be the conscience of the world and achieve justice and maintain peace.  However, on many occasions the Security Council has been unable to adopt critical resolutions for certain countries due to the veto right.  Some countries are not implementing the Council’s resolutions, even if those resolutions are binding and immediate.  For instance, Security Council resolution 425 (1978) called on Israel to immediately withdraw its troops from the territory of Lebanon.  That resolution was only implemented after several decades.

Another resolution adopted by the General Assembly in 1948 called for the return of Palestinian refugees to their homeland as soon as possible, he continued.  That resolution remains unimplemented to this day.  The veto right has many reasons for its existence.  However, the use of that right has had a negative impact on people around the world.  Therefore, for the United Nations to have an international leadership that is relevant for all, it must be reformed in a way that takes into consideration the expansion of the Security Council and the increase of its membership.

It is also important for the General Assembly to reflect the tendencies of the international community, he said.  The United Nations is also called to enhance human rights around the world.  Having contributed significantly to the Universal Declaration of Human Rights, Lebanon has committed to those rights in the introduction and preamble to its Constitution.  Its Parliament put forward a law on human rights that included the establishment of a committee that will look into allegations of torture and mistreatment.

Lebanon is trying to mitigate the effects of conflict, he noted.  It was able to eradicate terrorist groups in the rural areas to its north, as well as sleeper cells.  It held parliamentary elections in accordance with a law that took into account population percentages and was reflective of all the components of Lebanese society.  However, it is still facing the consequences of what is happening in Syria.  There has been an influx of individuals taking refuge in Lebanon and his country is trying to provide a decent life for those individuals.  Yet, the number of Syrians in Lebanon is rising and it is affecting Lebanese communities, notably with an increase in the levels of crime and unemployment.

He referred to a 2014 map issued by the Office of the United Nations High Commissioner for Refugees (UNHCR), which shows the increase in the number of Syrian displaced persons from 25,000 in 2012 to more than 1 million in 2014.  He pointed out that in 2014 the United Nations stopped counting the numbers of displaced Syrians.  There are currently over 1.5 million Syrians in Lebanon.  Lebanon seeks to enhance the right for the safe, sustainable return of Syrians to their country without any delay.  However, it should not be linked to any political settlement when no one knows when that settlement will be reached, he said, adding that, while he rejects the idea of a nationalization project, he welcomes initiatives to address the displacement problem.