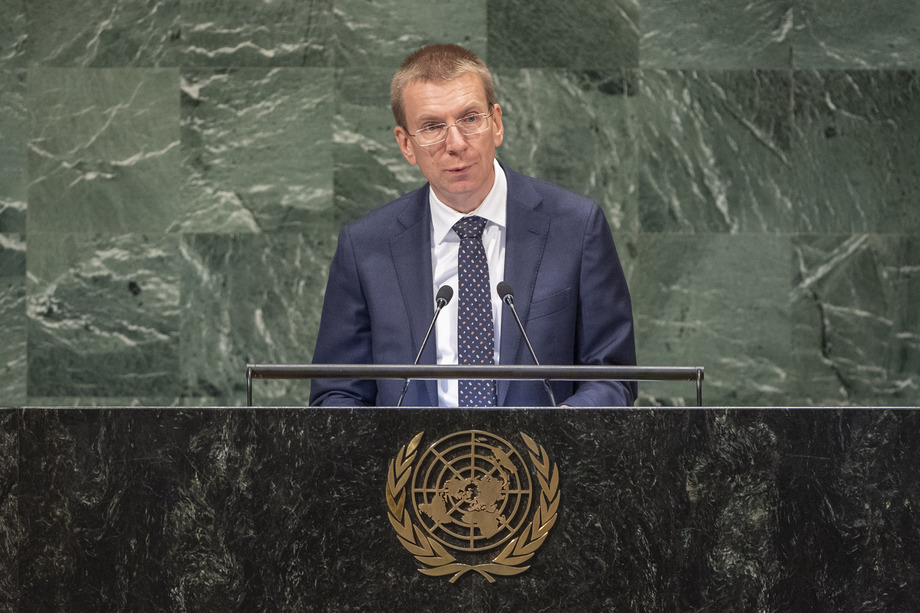 EDGARS RINKĒVIČS, Minister for Foreign Affairs of Latvia, said that the end of First World War marked the birth of a new Europe which promised self‑determination, democracy and prosperity for its citizens with the establishment of the League of Nations.  However, the Soviet and Nazi occupations of Latvia and much of the European continent is a harsh reminder of what happens when serious violations of international law are tolerated.  The Russian Federation, the official successor of the Soviet Union, still does not acknowledge well‑documented facts of history.  He called on that country to embrace the truth and clearly condemn the actions of the Soviet Union, adding that the protection of human rights was essential to Latvia’s transition to a democratic society.

The United Nations must be capable of defending human rights in any situation, be it the bombing of civilians in Syria or the persecution of Crimean Tartars by the Russian authorities, he continued.  Security and human rights go hand in hand.  A free press is vital for peace and justice and he urged the Russian Federation to release illegally detained Ukrainian filmmaker Oleg Sentsov, who is entering day 139 of his hunger strike today.  He also called on Myanmar authorities to free the two Reuters journalists, Wa Lone and Kyaw Soe Oo.  All nations must adhere to their commitments under international law and human rights, especially regarding freedom of expression and freedom of assembly, which have deteriorated notably during the past year.

He voiced his support for the reform process initiated by the Secretary‑General in the areas of peace and security, development and management and for those reforms to be implemented swiftly.  “This is a unique organization with a heavy responsibility,” he emphasized, observing that Security Council reform is long overdue.  However, that stalemate should not impede progress elsewhere.  The Human Rights Council must be strong, effective and capable of reacting quickly to serious human rights violations in any part of the world.  Latvia is engaged in the process of improving the effectiveness of that Council, he said, adding that a prevention‑focused United Nations is even more important given that conflicts and crises not prevented tend to drag on for years and decades.

No nation was ever secure in isolation, he pointed out, stressing that Member States have a responsibility for one another’s security.  Further, at the beginning of the twentieth century, combatants accounted for 90 per cent of conflict‑related casualties.  Today, 90 per cent of the casualties are civilians.  Calling on all States to become parties to the Arms Trade Treaty, he underscored that the future of multilateralism will depend more on changes in the attitudes of Member States than on reforms of the Organization’s system.  “We should admit the United Nations for what it is.  It is not perfect,” he said.  Nonetheless, it still remains a very necessary instrument for maintenance of peace, economic development and codification of international laws.