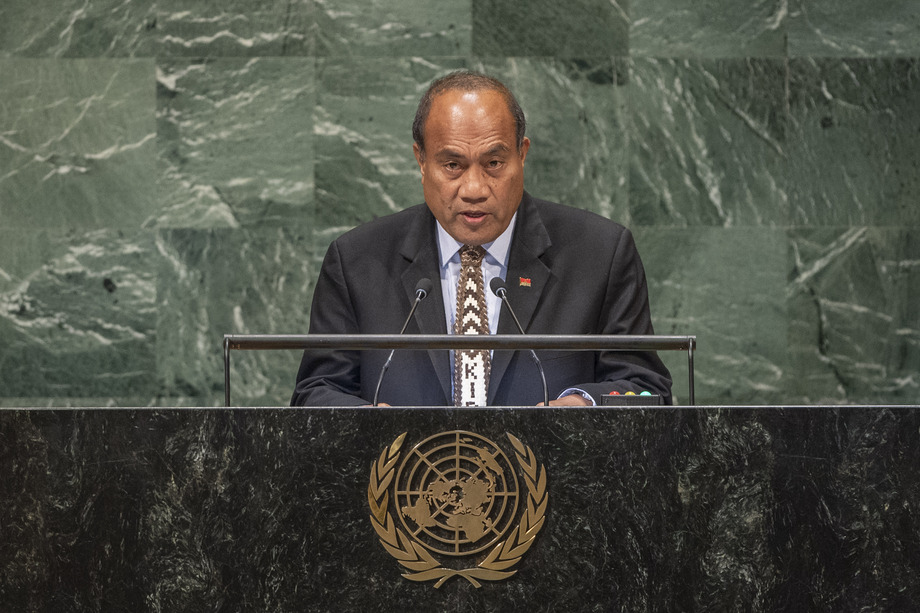 TANETI MAAMAU, President of Kiribati, said that the theme of the seventy‑third session — making the United Nations relevant to all people — is a strong call and reminder to the United Nations machinery that the effectiveness of the Organization’s efforts is not measured by how much we have achieved, but by how much those we serve have seen a better change in their lives.

He said that Kiribati has long recognized the importance of peaceful living characterized by a traditional and humble way of living in harmony, something that is sustained through regular community meetings in traditional local meeting houses called “maneaba”.  “Maneaba” means to embrace all in a holistic system.  In the Pacific context, there are other instruments to address the socioeconomic and political risks in the country, as the Pacific accounts for 20 per cent of the world’s ocean in terms of exclusive economic zone.  Therefore, the completion of maritime boundaries is very critical.

He noted the adoption of the historic United Nations Law of the Sea, which in 1982 enabled the country to own and sustainably manage a huge area of ocean.  In addition, he noted the Comprehensive Nuclear Test Ban Treaty assured that radiation illnesses suffered by citizens will not be repeated.

Moving on to United Nations governance and accountability, he said that the Organization is constantly pulled between opposing but interconnected interests, but that it was critical the Assembly could ensure that balance was maintained.  He expressed concern that the financial difficulties facing the United Nations were impacting its services and the well-being of staff.  Therefore, it is high time to reassess the validity of certain activities of the United Nations, ones which were applicable during the post-war years but are no longer effective with United Nations services becoming the exclusive domain of huge multinational corporations.  He gave the example of peacekeeping and the hundreds of millions of dollars spent, money that could be better utilized on eliminating the root causes of conflicts, armed terrorism and humanitarian crises by investing in good governance, education and health.

Highlighting other opportunities, he noted that his country launched its first climate change policy, which focuses on resilience and priority areas in water and sanitation as well as coastal protection.  To this end, he reaffirmed that Kiribati was continuing to maintain 11 per cent of exclusive economic zone in the Phoenix Islands.  In this respect, he commended current efforts towards new legally binding instruments on the use of marine biological diversity.