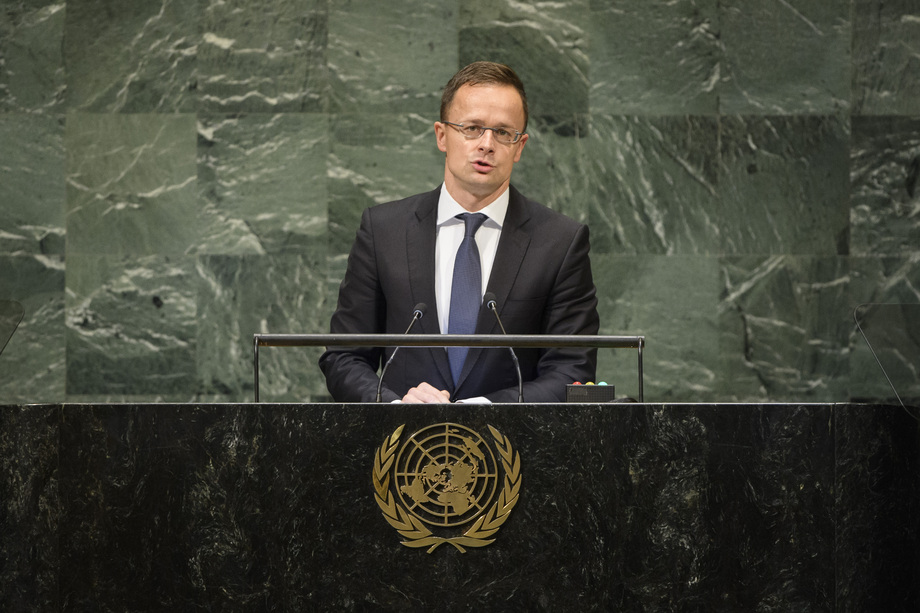 PÉTER SZIJJÁRTÓ, Minister for Foreign Affairs and Trade of Hungary, pointed to migration as the greatest challenge in history.  Migratory waves are imposing huge security risks globally, destabilizing countries, causing political debates globally and bringing terrorism to a region where it did not exist before, he said.  Migration is not beneficial for everyone, especially not for those countries hosting a large number of migrants coming from different cultures, he added.  Arguing that it leads to the creation of a parallel society, he recalled the 400,000 illegal migrants marching through Hungary in 2015, violating borders, disrespecting his people’s way of life and threatening individuals and families.  He stated that Hungary experienced illegal migration first‑hand, deploring the fact that the European Union failed while looking for an answer to this challenge.  He argued that the Union looked at how to encourage the migratory flow and not how to stop it.  While the Union wants to introduce obligatory quotas for migrants to be taken in by its Member States, he said that the bloc intends to punish unwilling countries.  The Union’s institutions kept saying that stopping migration is not possible.  However, Hungary proved them otherwise, he said, adding that his nation spent more than €1 billion to build a fence along its borders.

Policies encouraging migratory waves are harmful and must be stopped, he said.  “Migration is not a fundamental human right,” he underlined, noting that violating international and national borders is also not a right.  Officials of the United Nations tend to speak of migration as a means to improving prosperity and global innovation, he noted, recalling that this is a forced and biased position, warning that the Global Compact for Migration is the worst possible thing to do.  Referring to the United States leaving the process, he stressed that “We will also leave the process as we do not accept the Global Compact on [for] Migration and we will not take part in the mechanism,” he declared, adding that the Compact is strongly biased and unbalanced.  He noted that it is dangerous, causing further migratory waves.

The sovereignty of countries must be respected, he emphasized, noting that the international community must respect the rights of countries to permit whom they wish to enter.  All nations have the right to decide with whom they want to live, he underlined, while safeguarding their historical and cultural heritage.  Labour markets, economic and social policies, and demographic trends should be defined and controlled by countries themselves.  Border protection measures should not be based on human rights, he said, noting that it is a national security issue.  It is an obligation of each country, he said, recalling that nations have the right and responsibility to control their own borders.  He stressed that illegal border crossing is a serious criminal offense which must be made clear, emphasizing that violating such regulations must result in serious consequences.

According to the Compact, a multicultural society is more valuable than a homogeneous one, he said.  Contradicting this, he said nations must be able to decide that themselves, declaring that Hungary does not believe it.  Deploring that the Compact only states migrants’ rights, but not the rights of the peoples affected, he noted that Hungary establishes its migration policies on common sense, putting security first as it does not want a repeat of its experience from 2015.  Modernizing the education system and raising more children will help to address demographic challenges, he said.  He urged the international community not to encourage migratory flows.  Instead of people risking their life and leaving their homes, we should bring aid to them, he said, pointing to Hungary assisting Christian people in the region and helping them to stay where they have lived for ages.  Lastly, he warned that Hungary will not approve the Global Compact for Migration as it stands against national interests, declaring that his nation will always stick up for its rights.