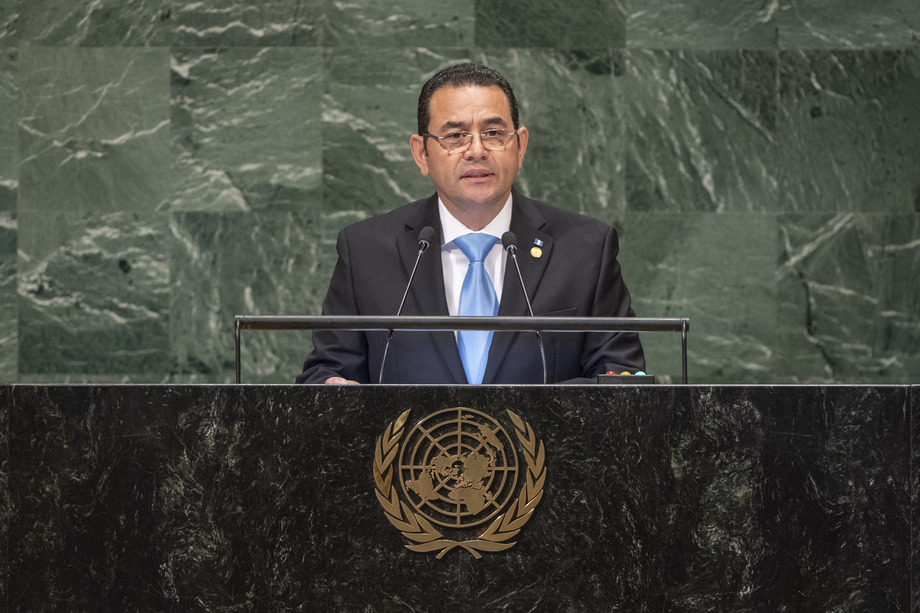 JIMMY MORALES, President of Guatemala, expressed appreciation for the solidarity shown by the international community and humanitarian organizations with his country, which in 3 June suffered human losses and material damages in the wake of a volcano eruption. Today is an opportunity to reflect on the role of the United Nations in the world order. His country prides itself in its strong will to peacefully resolve territorial issues. Over the past century and a half, it has had a maritime dispute with Belize. In 2018, a popular vote was held, with 96 per cent of voters in favour of bringing the case to the International Court of Justice. He welcomed a decision by Belize to set a date for their vote in 2019 and eagerly awaits the outcome of their vote. The resolution of this dispute will bring economic and social benefits to both nations.

He said Central America’s economic integration continues to progress. In 2018, a historic step was made with the establishment of the customs union between Guatemala, Honduras and El Salvador, meaning that more than 80 per cent of the bilateral trade will enjoy free transit of goods thanks to tariff harmonization. This integration turned three countries into one market with 32 million people. According to World Bank data, the border crossing time was reduced from 55‑60 hours to 15 minutes.

Guatemala’s fight against transnational threats is unprecedented in the region, he continued. In the last two years, Guatemalan security forces, in collaboration with state agencies in the United States, seized more than 471 million poppy plants, with a value of $1.4 billion, and seized 34,000 kilos of cocaine, and 400 per cent more heroin than in previous years. This meant it seized more drugs in the last two years than in the last eight years combined. Guatemala has made significant progress in combating corruption and improving transparency. Its initiative and open Government mechanism has now moved to the third national action plan 2016‑2018. Guatemala worked hard to meet the international standards of tax transparency and ratified a convention, which moves Guatemala out of the list of countries considered as tax havens.

Guatemala respects the sovereignty of other countries, he said. After four decades of internal armed conflict, his country moved to the harder task of building and maintaining peace. The International Commission against Impunity in Guatemala (CICIG) was created in December 2006, when the United Nations and his country signed an agreement setting up the Commission as an independent body charged with investigating and prosecuting serious crimes in Guatemala. Although the body has helped strengthen his country’s democratic institutions, his Government has decided not to extend its mandate because it has interfered in the internal affairs of Guatemala. He also denounced the excessive use of force and power by the Commission and illegal pretrial detention, requesting the United Nations Secretary-General appoint a new commissioner for the body.

Guatemala has designed a technology called “biobars” whose objective is to decontaminate rivers, beaches, seas and oceans, he said. The country continues to work hard in the implementation of the 2016‑2020 national strategy for prevention of chronic malnutrition, which is directly related to the objectives of sustainable development — putting an end to hunger, achieving food security and improving nutrition.