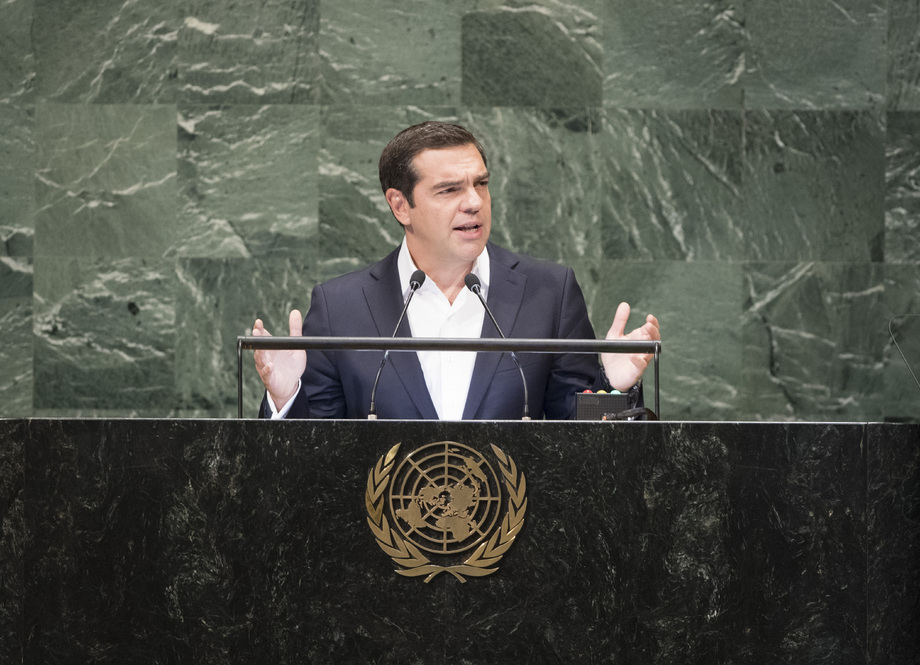 ALEXIS TSIPRAS, Prime Minister of Greece, recalled that his country faced three overlapping international crises in recent years.  It was the country most hard‑hit by the eurozone crisis, and lost 25 per cent of its gross domestic product; it was the European country that carried the heaviest burden of the refugee crisis per capita; and it has been at the centre of a worsening destabilization in the Balkans and the Eastern Mediterranean.  In this context, nationalist forces became stronger, and succeeded in reframing the debate.  The question is no longer whether we can count on international institutions to solve common problems based on shared values, but rather whether these problems and values are common at all.  Yet, “not only did we manage to stay standing, overcoming these difficulties, but beyond that we became part of the solution,” he stated, stressing that his country avoided nationalist politics and resisted the directives of those who disregard the will of the Greek people to advance their own interests.

His country remained in the eurozone by carrying out tough negotiations for an economic program that centred on necessary structural reforms and eschewed the perpetuation of punitive and exhausting austerity, he continued.  Greece also protected labour rights and established a respectable minimum wage, while guaranteeing fiscal space to support the welfare State and those who are most vulnerable.  Highlighting growth rates now at 2.1 per cent and the unemployment rate’s 8 per cent fall, he emphasized that his country is becoming a regional energy, commercial and transport hub.  “We are overachieving on high budget surpluses while investors’ interest is growing steadily,” he stated.

Greece dealt with the highest refugee flows in post‑war European history while respecting international law and human rights, he said.  Without giving in to nationalist and xenophobic voices that called for push-backs, his country supported the difficult but necessary European Union‑Turkey statement, while accepting that those who do not need international protection return to transit countries where they are safe.  “The people of Greece, despite their difficulties, opened their arms to incoming migrants, showing the world what solidarity means,” he stated.  He also underlined that, while the Greek asylum authority did not exist five years ago, it deals today with the highest per capita number of applicants in Europe, adding that deaths in the Aegean have nearly reached zero and migrant flows have fallen radically.

Turning to the security crisis in his region, he pointed out that his country established trilateral schemes of cooperation with Egypt, Israel, Jordan, Lebanon and Palestine.  In its difficult relations with Turkey, Greece has remained committed to the principle that cooperation and respect for international law is the only way to foster stable bilateral relations.  Stressing the need to respect international law in the Aegean Sea and the Eastern Mediterranean, he reaffirmed his full support for a just and viable solution to the Cyprus issue based on United Nations decisions.  Greece is actively promoting stability and economic growth in the Balkans through a dialogue with Albania and the Prespa Agreement with its northern neighbour, “a mutually acceptable arrangement that preserves the dignity of both sides”, he noted.

“The dilemma is not patriotism or globalism,” he went on to say.  Rather, the choice facing the international community is leaving the world to a vicious circle of national reactions and regressions that leads to tragedy, or creating the conditions for collective, progressive solutions that respect the national and popular sovereignty of each country.  “Challenges that are common by their very nature […] can only be dealt with collectively, on the basis of shared values,” he affirmed.  In that spirit, he called on international organizations to be more accountable and respond to the needs of States and citizens.  Further, he expressed support for the 2030 Agenda, the Global Compact on Migration, the Paris Agreement and the Joint Comprehensive Plan of Action.  Stressing the need to push forward the human rights agenda, he pointed out that Greece has established citizenship for second‑generation immigrants, legal recognition of gender identity, institutionalized civil partnership and deepened rights for the Muslim community.