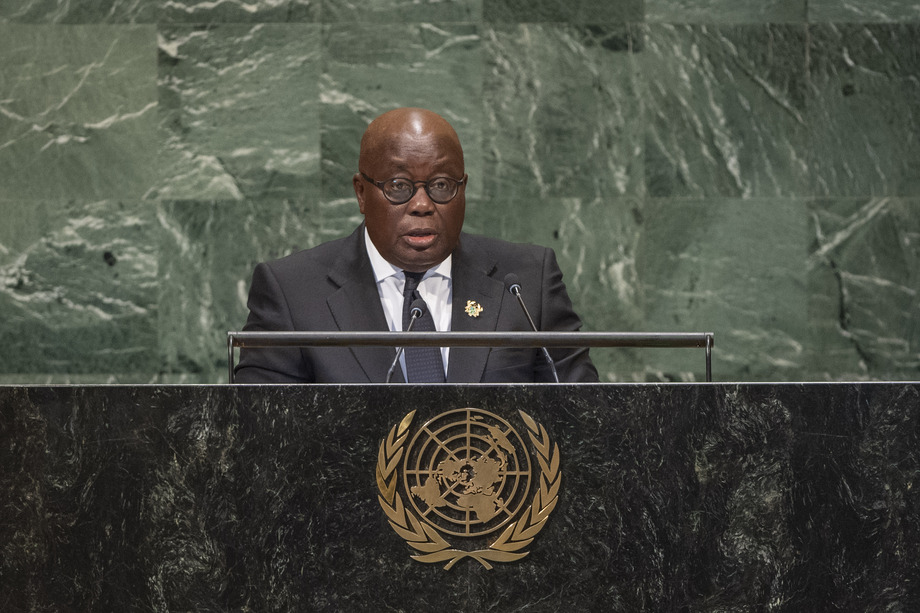 NANA ADDO DANKWA AKUFO-ADDO, President of Ghana, said that Kofi Annan’s passionate and profound belief in the United Nations and his certainty that a better organized and stronger Organization would make the world a better place is an ideal that should not be allowed to die.  The international community continues to be faced with the stark reality that resolutions, norms and any number of votes in the Security Council and General Assembly mean nothing without the political will to enforce them.

When nations gathered in San Francisco 73 years ago and signed the landmark document that created the United Nations, it was a very different world than that which exists today, he continued.  Ten years ago, as the General Assembly was starting its proceedings, the world was plunged into a financial crisis.  The consequences were felt around the world, including in small countries like Ghana.  Those events provide proof that the world is an interdependent world.

He noted that 55 per cent of the work of the Security Council in 2017 had to do with Africa.  Unfortunately this invariably meant peacekeeping and poverty‑related issues.  Africa no longer wants to be the place that requires peacekeepers and poverty-fighting non-governmental organizations, no matter how noble their motives.  Regional bodies like the Economic Community of West African States (ECOWAS) and the African Union are making systematic efforts to bring peace and stability to the entire continent.  Ghana, like many countries in Africa, is forging relations with China to address part of the infrastructure deficit.

This is not a uniquely Ghanaian or African phenomenon, he pointed out.  Developed, rich and well-established countries have been paying regular visits to China, seeking to open new economic ties and improve upon existing ones.  A lot of anxiety is being expressed about the possibility of a recolonization of the African continent by a new power.  However, at the turn of the twentieth century, China’s first railroads were built by western companies and financed by western loans to a nearly bankrupt Qing Dynasty.  It was under those circumstances that the port of Hong Kong was leased for 99 years.  The rest is history.  That former victim of western railway imperialism is lending billions to countries throughout Asia, Africa and Europe to construct railroads, highways, ports, power plants and other infrastructure.

Ghana must build roads, bridges, railways, ports, schools and hospitals and must create jobs to keep young people engaged, he said.  It is obvious that the development trajectory Africa is on is not working.  A different one is being tried and he called upon the international community to help stem the huge flows of illicit funds from the continent.  It is in everyone’s interest that Africa make a rapid transformation from poverty to prosperity.