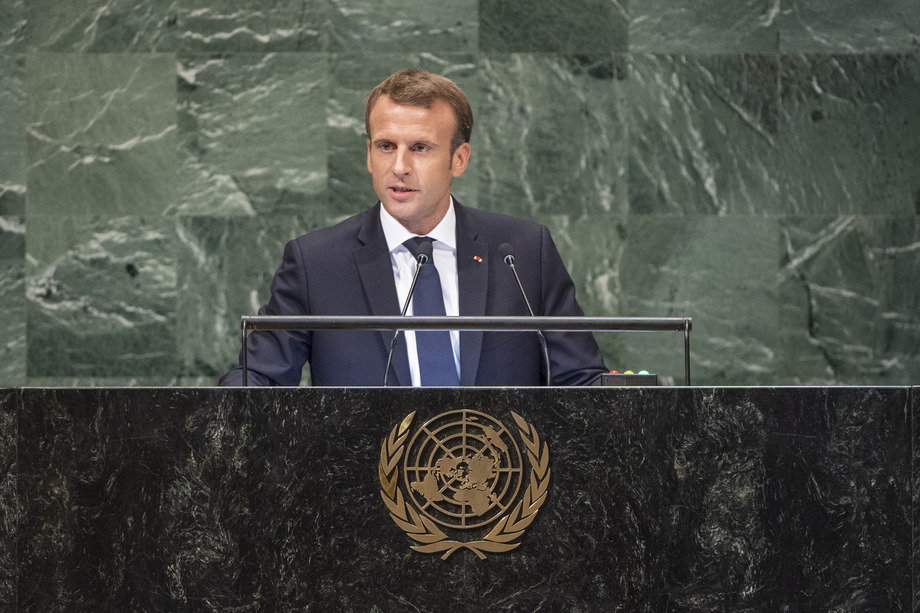 EMMANUEL MACRON, President of France, said that despite achievements in human rights and poverty eradication in the last decades, financial, climactic and gaping issues of inequality remain today.  The international community’s collective ability to attack these crises has been hampered by the Security Council.  Cultural relativism is pervasive and could render the United Nations a symbol of powerlessness.  As everyone pursues their own interests, such unilateral pursuit leads directly to isolation and conflict.  The task is not to fuel tensions but to put forth a new agenda through dialogue and multilateralism.  Trade imbalances can be solved with common rules that guarantee fair competition, not bilateral dealings.  As well, solving the Israel-Palestine crisis cannot happen through unilateral initiatives or by trampling on Palestinians’ right to peace or underestimating the right of Israel to safety.  All must go beyond historical positions to think outside the box, he said, stressing that such an approach will effect positive change on the ground.  The law of the strongest will only exacerbate tensions.

Proposing that a new world balance to be crafted together, he called for new forms of international and regional cooperation.  The upholding of sovereignty enhances regional cooperation and more robust international safeguards will enable responses to current crises.  In Syria, for example, the role of the Organization should be to head peace efforts, provide the ways and means to solve the humanitarian crisis, and to assist in crafting a constitution and free elections.  However, decisions ultimately must be made by stakeholders.  In Libya, this new approach would allow for a lasting solution.  State institutions in that country must be supported by the United Nations and the African Union.  All States must be able to count on themselves to guarantee their own security and must also draw upon regional and international organizations.  This was the intention of the African Union, an organization which should be supported by the United Nations, he said, noting that a resolution along these lines would be presented by the end of the year.

While sovereignty and enhanced regional and international cooperation must be upheld, only collective action allows for the upholding of sovereignty, he continued.  Thus, climactic, migration flows and other global issues must be tackled collectively.  The only way to effectively manage migration is to address the root causes, dismantle trafficking networks and protect borders while upholding international law and right to asylum.  After the financial crisis ten years ago, the international community failed to address the unequal spread of wealth across the globe and all of those who felt left behind.  Today the world is paying the collective price for that. A solution is needed for those suffering from gaping equality gaps, for impoverished people, for youth living in developing countries and that solution depends on what the General Assembly does.  France will increase its official development assistance (ODA) to €1 billion, an increase of 40 per cent.  As the incoming chair of the Group of Seven, he stated that inequalities will be addressed in that forum.  In the past, rich countries could impose an agenda on the rest of the world, but those days are over, he stated.

The Paris Agreement remains intact, despite withdrawal of the United States, and that should be reason for encouragement, he said, adding “people say it’s too late; well then, let’s hurry up”.  Calling for goals to be ambitious and bold, he urged Member States to stop signing trade agreements for those who do not participate in the Paris Agreement.  He also proposed that the United Nations support France in the creation of a mechanism to address inequalities when the Group of Seven meets.  As well, the World Trade Organization (WTO) rules should be revised to put everyone on equal footing.  Africa must be given a central and leading role in any internationally formed new order, as it is on this continent that the battle against inequality will be won or lost.  In alliance with Africa, the French chairmanship of the Group of Seven will look at these issues, he said.

“At a time where our collective system is falling apart, sadly, it is most in demand,” he said, adding that France will be there to remind everyone that nationalism always leads to defeat.  If courage is lacking in the defence of fundamental principles, global war is a threat.  Member States must find that courage again and renew the commitment to prevent the future scourge of war.  Ways and means to secure global peace must be identified.  Acknowledging that some might be tired of multilateralism, he implored people to resist the urge to view it as “trendy”.  It was genocide that led to the United Nations, he said, recalling the atrocities of the Second World War and the complacency of the international community at that time.  But France is a country that has always fought for universality, he said, imploring people to not succumb to indifference and to not accept history unravelling.  “Our children are watching,” he said.  “Let us do this on a human level.”