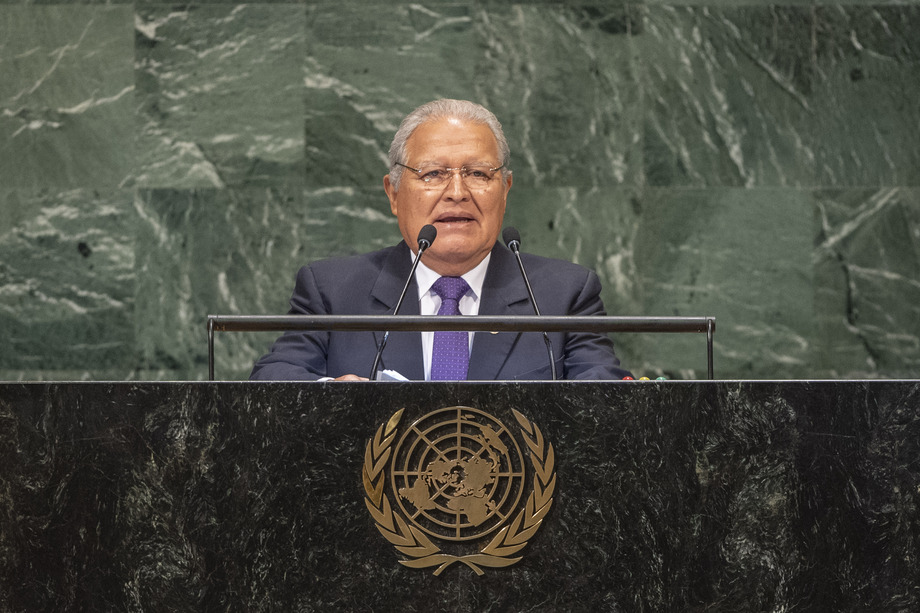 SALVADOR SÁNCHEZ CERÉN, President of El Salvador, expressed to the Secretary-General the urgent need to close the funding gap hampering the Sustainable Development Goals.  Saying El Salvador has allocated an unprecedented 50 per cent of its budget to achieve them, his country still requires the international community to shoulder its burden.

El Salvador is vulnerable in many respects, he said, with climate change being a major threat.  His country recently suffered through one of the worst droughts in its history due to climate change, driving it to invest further in food security.  El Salvador produces virtually no pollution but suffers from climate change caused by others.  Adding the country is moving to large-scale restoration of its ecosystems, he thanked UNEP for accepting their proposal for the 2020-2030 United Nations Decade for Ecosystems and invited the international community to support its adoption.

Noting that his nation had reduced poverty by 10 per cent between 2009-2017, he pointed to broader initiatives to improve living conditions.  He said there are now 100 municipalities with no illiteracy, including San Salvador, the third Latin American city to achieve that, thanking Cuba for its support.  His country has focused on defending women’s rights and preventing femicide and sexual violence, and has a national strategy to reduce maternal mortality.  He looked forward to the impending canonization of Bishop Oscar Romero by Pope Francis, which the people of El Salvador will celebrate with joy and hope.

Turning to migration, he welcomed the Intergovernmental Conference to Adopt the Global Compact for Safe, Orderly and Regular Migration and the global compact on refugees, which are clear examples of the United Nations seeking worldwide consensus.  Families coming from the northern triangle of Central America have suffered, harming boys and girls.  He called on United States authorities to speed up the reunification of children with their families.  El Salvador is working to improve living conditions, reducing irregular migration to the United States by 60 per cent, but he absolutely rejected any criminalization of migrants, who contribute to societies to which they migrate.  He urged competent bodies in the United States to provide greater migration security under Temporary Protected Status and Deferred Action for Child Arrivals.

As a founding Member State of the United Nations, El Salvador supports multilateralism in all endeavors and constructive international dialogues which can lead to political solutions, he said.  Calling for an end to unilateral measures, including the unjust blockade of Cuba by the United States and sanctions against Venezuela, he said that such coercive measures must end.