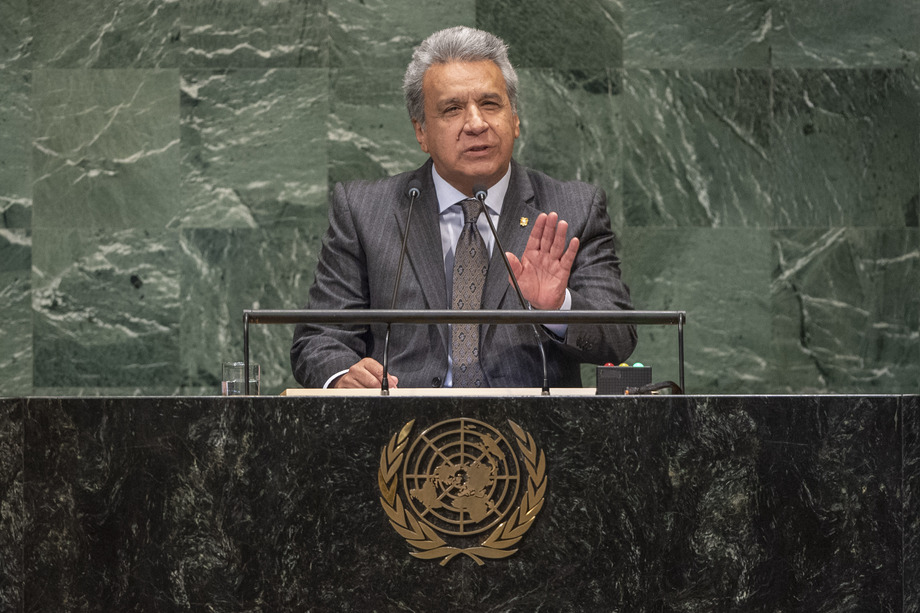 LENÍN VOLTAIRE MORENO GARCES, President of Ecuador, said that everything in life is cause and effect and that human beings tend to scour the past to predict the future.  Those who govern, leaders and decision-makers have a responsibility in the way the world receives the future.  History is something that can change.  Policies are successful when they strive to address the histories of every single individual, especially the poorest.  “We are united nations who are united to change the history of peoples,” he said.

Ecuador’s plan of Government is called “a whole life,” because it wants to be attentive to the human being from the moment they are conceived to the moment of their passing, he continued.  Being attentive means caring, motivating, and expressing gratitude.  Caring and encouraging are part of the first phase of life. To look after the child during its first thousand days of life is called “a mission of tenderness”.  Children are encouraged to study, to play, to be happy, to love science and to delve into technology.  It is important to study but also to create.  Further, elders should live in a society that is grateful for everything they have done, so that those final years are truly their best years.

What gave rise to this kind of thinking was the word “perhaps”, he went on to say, describing its application as “perhaps I was born and lived in the Amazon region in the lungs of the planet in the most mega-diverse tropical forest in the world.  There I got to know the problems of those who are abandoned, without even minimal health coverage”.  At the General Assembly, Member States will combat tuberculosis and the onslaught of non-communicable diseases.  Yet, access to life-saving medication is denied because privilege is given to intellectual property instead of the right to health care.  The more the United Nations strives to touch the lives of people, the stronger the world will be in the future, he stressed.

Ecuador’s “whole-life” programme also means all people need to be happy, he pointed out.  He noted that, in the great country of the United States, the second line of the Declaration of Independence states “[W]e hold these truths to be self-evident:  that all men are created equal; that they are endowed by their Creator with certain unalienable rights; that among these are life, liberty, and the pursuit of happiness.”  That Declaration inspired the Constitution of that great country.  For this, he said, he did not understand how countries such as the United States could blockade an almost defenceless nation such as Cuba and prevent others from having their right to freedom and the pursuit of happiness.

Idealistic young people will not understand how countries, which have achieved a level of superiority in weapons, prefer to see their sons fight in foreign conflicts, he stated.  Instead of resolving them, they perpetuate them. Bankers robbed the pockets of people of Ecuador when they made entire families poor, he said, noting that Governments, instead of caring for the poor and needy, often do everything that is the opposite.  “As a person with a disability, I know there will be no peace unless we have inclusion and we celebrate diversity,” he said, adding that as a President, peace becomes possible when efforts are made on behalf of those who need it most, making sure without exception, that everyone is free to realize their dreams every single day throughout their whole lives.