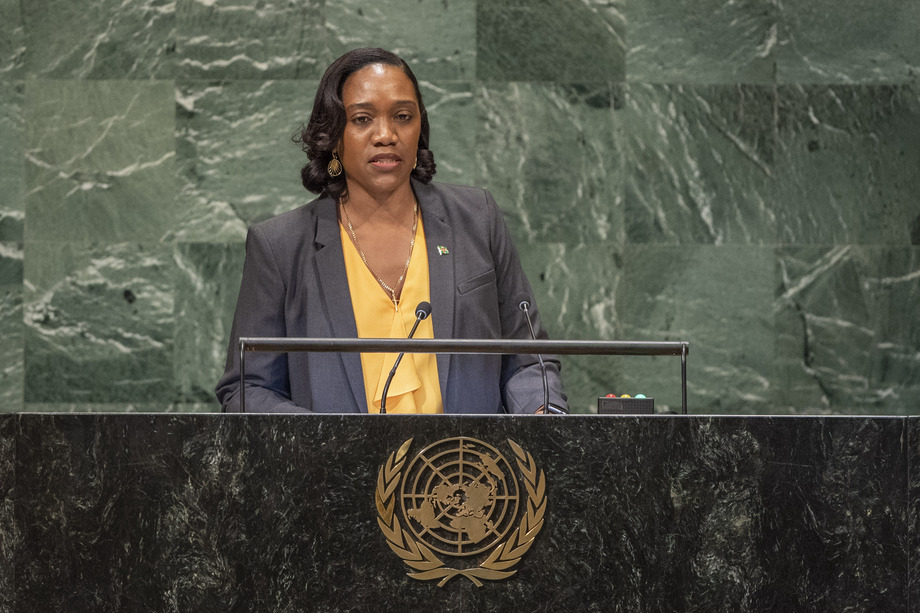 FRANCINE BARON, Minister for Foreign and Caribbean Community (CARICOM) Affairs of Dominica, said that there are moments in the history of a nation that captured its resilience.  She noted that for Dominica, the moment came last year, when Hurricane Maria unleashed its fury of 180 miles per hour winds that brought the country to its knees.  Immediately after, citizens began the daunting task of search and rescue, clearing roadways, and rebuilding.  Applauding Dominicans far and wide for being part of the relief efforts, as well as members of the United Nations family, she thanked all who helped.

“Let this not be another moment to simply sharpen the rhetoric or to speak merely of redoubling current efforts,” she said.  “We have done that too many times before — yet watched climate change ravage on, regardless.”  It is no secret that the lack of motivation by some countries is rooted in the fact that those who gain most from the activities that create climate change remain most removed from its dire consequences.  “Since climate change is the result of an economic calculus that will keep pushing global destruction further and further along, it must be accepted as the responsibility of our time,” she said, calling for collective efforts to stop it.

Within a few hours, Hurricane Maria caused damage equivalent to 226 per cent of Dominica’s GDP.  Two years earlier, a tropical storm had wiped out 90 per cent of the GDP.  The cost of building back better — of building a more resilient nation — comes with a price more than developing States can meet singlehandedly.  The price of consumption and production of goods that contribute to climate change does not compensate for the losses.  The “polluter pays” is an accepted principle and a golden nexus of morality, economics and environmental policy.  On an international level, it is the victim who pays.  The insurance model championed by many industrialized countries and international agencies as a solution to climate change asks island States on the front line to take out additional insurance against loss and damage, which are the direct results of a change in climate caused by others.  “This is asking the victim to pay by instalment.  This insane equivalent would be the arsonist saying to you that instead of trying to stop him setting fire to your house, you should take on fire insurance,” she said, adding that the game changer would be to establish a different kind of insurance, especially for vulnerable countries, that pays out quickly to the victims of climate disasters.

She proposed the United Nations oversee a “Climate Loss and Damage Insurance Fund” where premiums are paid by those who have contributed most and continue to contribute to climate change.  She noted Dominica’s response to climate change, instituting a plan to make it the first climate resilient nation in the world.  Dominica has drafted legislation to establish the Climate Resilience Executing Agency of Dominica and has identified $1 billion of critical projects.  The plan is based around designing super-resilient networks, water-proofing the economy, and building resilient communities.  The role of the United Nations is central to mobilizing resources, she noted, adding that official development assistance (ODA) must be re-engineered to take into account vulnerability.