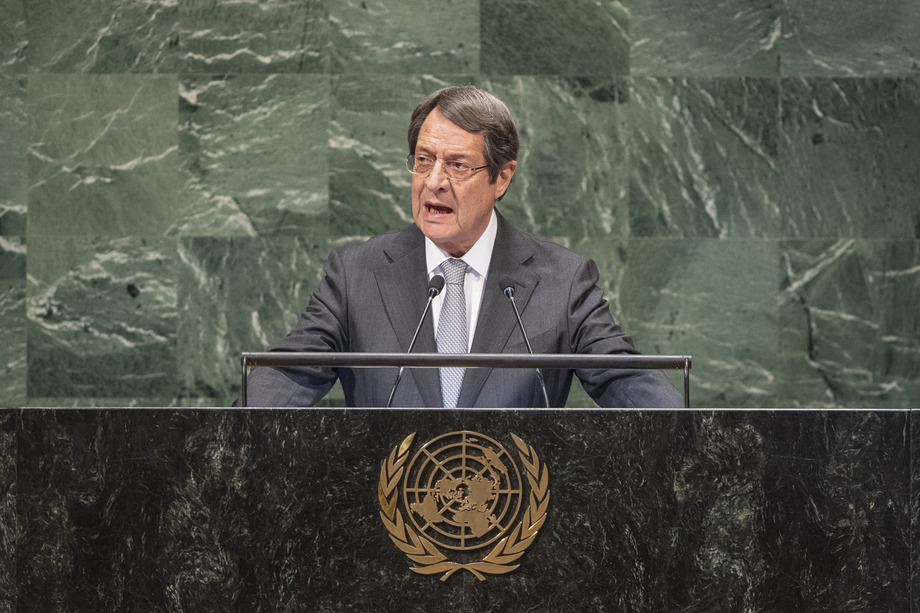 NICOS ANASTASIADES, President of Cyprus, while endorsing the General Assembly theme and its focus on the founding principles of the United Nations, questioned how Members come back year after year, and yet are unable to fulfil the basic aims of the United Nations Charter.  He also questioned why Security Council decisions remain certificates attesting to violations and why international law and agreements are not implemented.

He stressed that the cooperation of all must be ensured, specifically victim States suffering from certain issues including, among others, the expansionist ambitions by other States and the promotion of the military industry through formation of conflict in the interest of profit.  The enormous equality gap in hunger and nutrition resources around the world is alarming, while child mortality rates are still below acceptable levels.

Further, the root causes of migration remain unexamined and the implementation of the Paris Agreement on climate change has been hindered by special interests, he stated.  The inability to effectively implement United Nations resolutions has led to a lack of credibility and crises such as the forcible displacement of millions, ongoing hunger, human and drug trafficking, and the destruction of cultural heritage.

He called on Members to meet the shared responsibility of the Sustainable Development Goals and reverse ineffective policies in favour of a more targeted, results‑oriented approach.  Collective leadership and multilateralism is the only way to eliminate threats to peace and security, he said, again highlighting the importance of effective implementation of United Nations decisions.  To that end, he pledged support to the Secretary‑General in reforming the development pillar and called for further action to address the vulnerability of States to climate change.  Reform of the peace and security pillar is also of great importance but the former is jeopardized without the latter; the situation in his country is an example of this.

Given the volatile location of Cyprus, his country had reinforced regional ties and established trilateral partnerships with neighbouring countries, he continued.  Those partnerships are a practical expression of multilateralism and are not exclusive.  A viable and lasting settlement in Cyprus is important not only for the people of Cyprus, Greece and Turkish Cypriots.  It would also provide a much‑needed environment of stability and peace in the region.  Only a viable solution in line with European Union membership will achieve lasting peace, he emphasized, reiterating his commitment to a solution based on the relevant United Nations resolutions and calling on Turkey to demonstrate the political determination to reach a settlement.