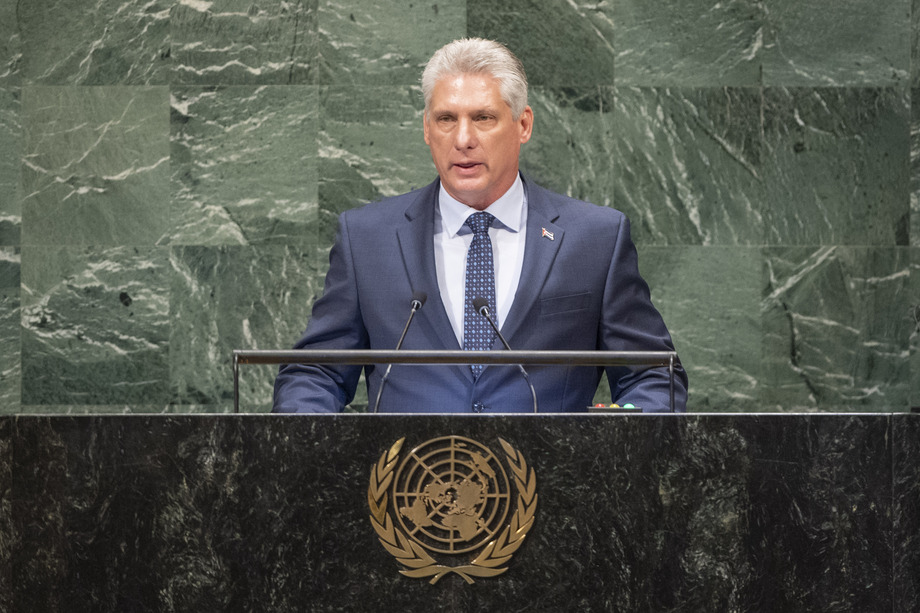 MIGUEL DÍAZ-CANEL BERMÚDEZ, President of Cuba, recalled historic moments of the General Assembly where Fidel Castro, Che Guevara, Raúl Castro, and the “Chancellor of Dignity”, Raúl Roa, all brought not only the voice of Cuba but the voice of Latin American, Caribbean, African, Asian, and all non-aligned people struggling for a fair international order.  Pointing out that the richest 0.7 per cent of the population owns 46 per cent of all the wealth, and still 3.460 billion people survive in poverty, he underscored that such realities are not the result of socialism, as the President of the United States said yesterday.  “They are the consequence of capitalism, especially imperialism and neoliberalism, of the selfishness and exclusion that is inherent to that system,” he declared.

He noted that capitalism consolidated colonialism, gave birth to fascism, terrorism and apartheid, and spread war.  Production and consumption patterns that characterize capitalism promote plundering and militarism and are threats to peace.  They also generate violations of human rights.  “No one should be deceived by anybody claiming that humanity lacks enough material, financial or technological resources to eradicate poverty, hunger, preventable diseases and other scourges,” he stated.  What is lacking is the political will of industrialized countries.  While there are claims of a shortfall in funding to attain the targets of the 2030 Agenda, $1.74 trillion were wasted in military expenditures in 2017.

Climate change is another unavoidable reality, he said, adding that the United States is one of the major polluters of yesteryear and today, refusing to implement the Paris Agreement and continuing to endanger the lives of future generations and the survival of humans.  In addition, military and nuclear hegemony is expanding despite the hopes of the majority for complete disarmament.  The international cooperation for the promotion of human rights for all is a must.

He went on to say that the current United States administration is attacking Venezuela with special cruelty, reiterating his country’s support for the Bolivarian and Chavista Revolution, the civic-military union of the Venezuelan people.  He also denounced the attempts at destabilizing the Nicaraguan Government and the politically motivated imprisonment of Luiz Inácio Lula da Silva.  He voiced support for the independence of Puerto Rico and Argentina’s legitimate sovereignty claim over the Malvinas Islands*.  He also reiterated his call for a just and lasting solution to the Israeli‑Palestinian conflict and reaffirmed solidarity with the Saharan people.  Noting the continued expansion of the North Atlantic Treaty Organization (NATO) towards the Russian Federation border, he rejected the imposition of arbitrary sanctions.

He also pointed out that the new United States Government was devoting itself to artificially fabricating scenarios of tension; such actions are in contrast with formal diplomatic relations in several areas – historic and cultural bonds, which are expressed in arts, sports, science and the environment.  “However the essential and defining element of the bilateral relationship continues to be the blockade, which seeks to suffocate the Cuban economy,” he said, adding that it is the most comprehensive system of economic sanctions ever implemented against any nation and continues to be a major obstacle to his country’s development.  He also noted that the actions of the United States Government against Cuba includes public and overt programs of gross interference in Cuba’s internal affairs.  However, Cuba stands ready to develop respectful and civilized relations with that Government on the basis of sovereign equality and will always be willing to engage in dialogue.