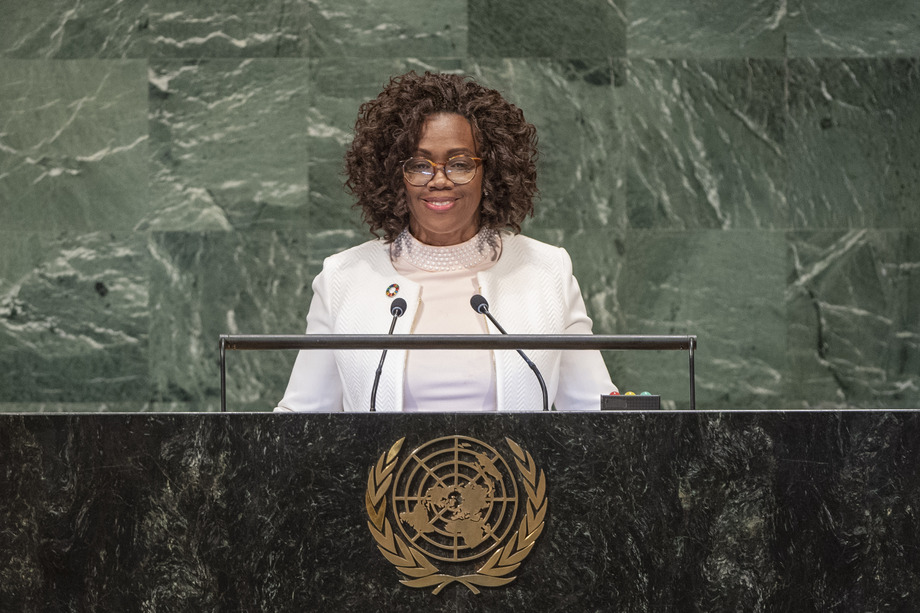 EPSY CAMPBELL BARR, Vice-President of Costa Rica, said that the fact that the United Nations General Assembly is presided over by a woman is part of a new moment in history in which gender equality is built on concrete action.  For the first time, Costa Rica’s Parliament has achieved gender parity.  The country now benefits from the talent, capacity, knowledge and leadership of women in these positions of power.  Highlighting her commitment to gender parity in the United Nations and the specific steps to achieve it, she said that women’s economic empowerment is important for their autonomy and their participation in the labour force significantly contributes to the economy, their families, communities and society in general.  Costa Rica and the United Kingdom will co-chair the Group of Champions for Women's Economic Empowerment.

Costa Rica’s defence doctrine is based on dialogue and international law, she said.  Democracy must be based on a robust electoral system, the protection of human rights, a modern legal system and individual freedoms.  Costa Rica wants to be a part of a community of nations with rules of co-existence.  Even though some countries protest the interference of United Nations bodies or regret their financial contributions to the Organization, for Costa Rica and for many other countries the United Nations is “the last gleam of hope”, she said, adding:  “We should not let them down”.

Condemning terrorism, which gravely affects women and girls, she stressed the importance of promoting justice, human rights and education, adding that Costa Rica rejects all forms of violence.  Since last year, Costa Rica has contributed to United Nations peacekeeping, sending female police officers to serve as international observers for the United Nations Verification Mission in Colombia.  On ending impunity, she expressed support for the International Criminal Court, and for bolstering it as victims deserved justice.  Costa Rica supports complete denuclearization of the Korean Peninsula and lifting the embargo on Cuba.  She deplored the fact that sexual violence is used as a tactic of terror and a weapon of war to scare communities, reaffirming support for zero tolerance of such abuse.  Voicing support for multilateralism, she pointed at the Iran nuclear agreement and the Eritrean-Ethiopian peace accord as examples.  Raising several other concerns, she said action was needed to advance the ban on nuclear weapons, and address human rights violations in Nicaragua, and to work towards a global compact on managing migration.

For its part, Costa Rica has taken many steps to work with all stakeholders, from civil society to the private sector.  To achieve the 2030 Agenda, she underlined the need to recognize the multidimensional nature of poverty while paying special attention to middle-income countries so they could reach objectives and targets.  Costa Rica is now working on a plan focusing on green options for, among other things, waste management, agri-food systems and models for livestock development.  Emphasizing that the decarbonization of societies is this generation’s biggest challenge, she said Costa Rica aims at becoming a laboratory to do so, inviting Member States to follow suit.  “We can be part of a new, enlightened generation with an inspiring vision of our potential,” she said.  “Now is the time to forge a more sustainable, fairer future.”  Indeed, the young, “enlightened generation” must be robustly supported, as they are the ones who will truly change the world.