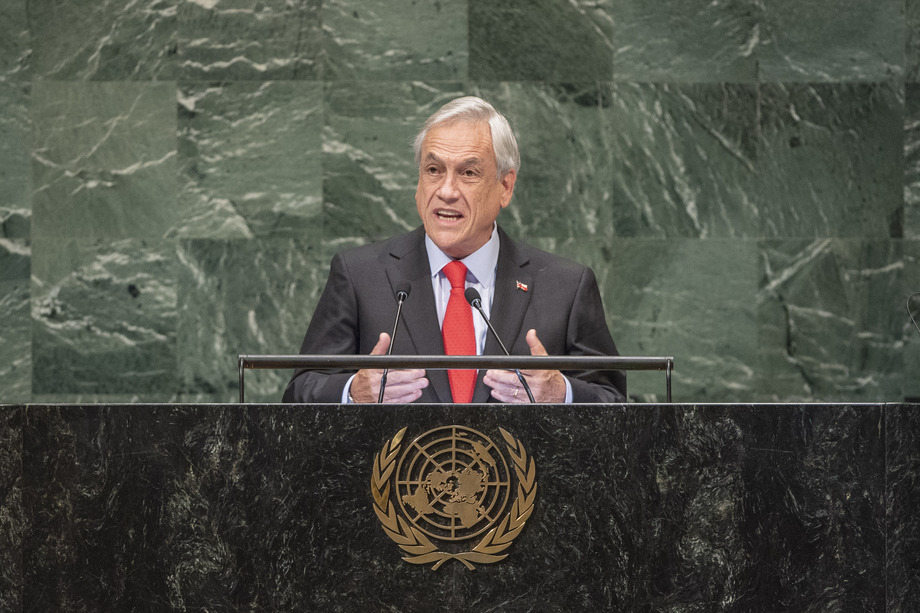 SEBASTIÁN PIÑERA ECHEÑIQUE, President of Chile, said the world is experiencing huge global transformation, creating new dangers as well as amazing new opportunities.  Based on western democracy and the social market economy, the world order that emerged following the cold war has given rise to new tensions as States are no longer the only actors on the international stage.  The world has been unable to address serious threats to international security, including terrorism, drug trafficking, armed conflicts and transnational organized crime.

Turning to migration, he said large‑scale movements of people and their associated problems transcend the existing international order and required the action of all States.  Terrorism, war, hunger and totalitarianism are causing large cross‑border displacement.  Chile is experiencing the results from this phenomenon with the number of immigrants in the country swelling from 416 million in 2014 to 966 million in 2017.  In that regard, he expressed Chile’s commitment to the adoption of a policy that promotes safe, orderly and regular migration.  The country’s policy seeks to strike a balance between the sovereign right of the State to regulate migrants and respect for their fundamental rights.

The Government has embarked on a mission to transform Chile into a developed country, he went on to say, stressing the need for comprehensive, inclusive and sustainable development strategies.  Sustainable development calls for gender equality and a zero‑tolerance approach to gender‑based violence.  States must be judged by how they treat their most vulnerable citizens.  Over the last four decades, humans have done harm to the health of the planet and world leaders will be judged on how they respond to the threat of climate change.  Nobody wants humans to be counted among extinct species.  In response, his Government is creating protected areas in biodiversity conservatories, committing itself to protection of the oceans, working towards a clean and safe energy matrix, and recognizing the threat posed by plastic pollution.

In October, Chile will mark 30 years since the referendum that opened the way to recovery of democracy, he said.  However, there are other countries in the region that have not been able to begin such a transformation.  The General Assembly must listen to the people of Venezuela who have been left voiceless by their Government.  That country is governed by an authoritarian regime, while in Nicaragua over 400 people have died at the hands of Government forces.  The international community must act in the face of those violations, he stressed, adding that Chile will not recognize the new Government of Venezuelan President Nicolás Maduro Moros.

The competence of the United Nations to contribute to the maintenance of international peace and security is now limited, he observed.  The Organization has lost the ability to prevent crises and strengthen the institutions of Member States.  The United Nations structure, especially of its Security Council, does not respond to current needs and challenges.  The Council’s composition does not reflect the modern world, he noted, pointing to the underrepresentation of Africa and Latin America.  Only by reviving the values of freedom, peace and respect for human rights can the United Nations fulfil its responsibilities.