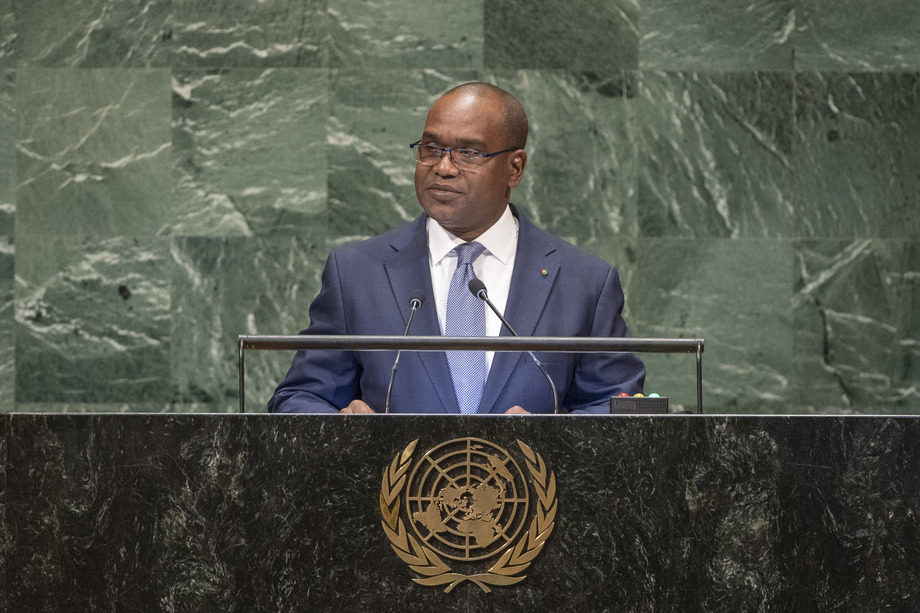 ALPHA BARRY, Minister for Foreign Affairs and International Cooperation of Burkina Faso, said his country was enacting efforts to strengthen democracy through measures including a new constitution.  Other progressive steps include abolition of the death penalty.  Despite a difficult security and social context, his country has a growth rate of 6.7 per cent, due to cleaning up public finance, improved tax revenue measures and growth projects launched under a National Economic and Social Development Plan.  A policy of free health care for pregnant women and children under the age of 5 will be gradually extended to the entire population.

He expressed deep concerned that his country is the target of terrorist attacks, formerly limited to the northern region but now reaching the south-west and east, bordering Côte d’Ivoire, Ghana, Niger, Benin and Togo.  In three years, 229 people have been killed by terrorist groups, with his Government mobilizing all resources to combat the threat.  Unfortunately, terrorists are now using improvised explosive devices.  In the past week, they blew up two vehicles killing 14 members of defence and security forces.  Terrorists are also targeting civilians, students and teachers, forcing closure of 520 schools depriving 56,000 students of their right to education.  However, he said the attacks have strengthened the country’s unity, solidarity and determination to defend its values.  One thing is certain:  no country can fight terrorism on its own.  Pointing to General Assembly resolution 72/165, adopted in December, proclaiming 21 August the International Day of Remembrance and Tribute to the Victims of Terrorism, he called for the Security Council to support the G-5 Sahel Joint Force by placing it under the mandate of Chapter VII of the United Nations Charter.

Noting that poverty, exclusion and climate change are root causes of conflict, his country launched the Special Emergency Assistance Programme to the Sahel Member Countries and Sudan, addressing dual socioeconomic and security challenges.  More than ever, the world must defend and encourage multilateralism.  To that end, he noted Burkina Faso has 2,000 personnel involved in six peacekeeping operations.  One of three countries maintaining troops in Guinea-Bissau, his country is also the largest troop-contributing country to the United Nations Multidimensional Integrated Stabilization Mission in Mali (MINUSMA).

Turning to nations in crisis, he congratulated the Government and people of Mali on successful recent presidential elections despite the threat of terrorism.  The peace agreement between leaders of South Sudan and renewed negotiations in Western Sahara were also a source of hope.  However, he said the Israeli-Palestinian conflict remains a concern and he remains convinced it can only be resolved with a two-State solution.  Dialogue on the Korean Peninsula is a good sign that needs the encouragement of the international community.  He also called for an end to the embargo on Cuba.  Pointing to the proliferation of small arms and light weapons as a threat to peace and security in several regions, he also condemned the resurgent use of weapons of mass destruction.  With humanitarian issues also a concern given the refugee crisis, he hailed the Global Compact for Safe, Orderly and Regular Migration, noting the conference to adopt it will take place in Africa.  As a country of immigration with 4 million citizens living abroad and 25,000 refugees on its soil, Burkina Faso will also adopt the Global Compact on Refugees.  Calling for Security Council reform for a more inclusive body, he said it must remedy an injustice against Africa, which deserves permanent membership.