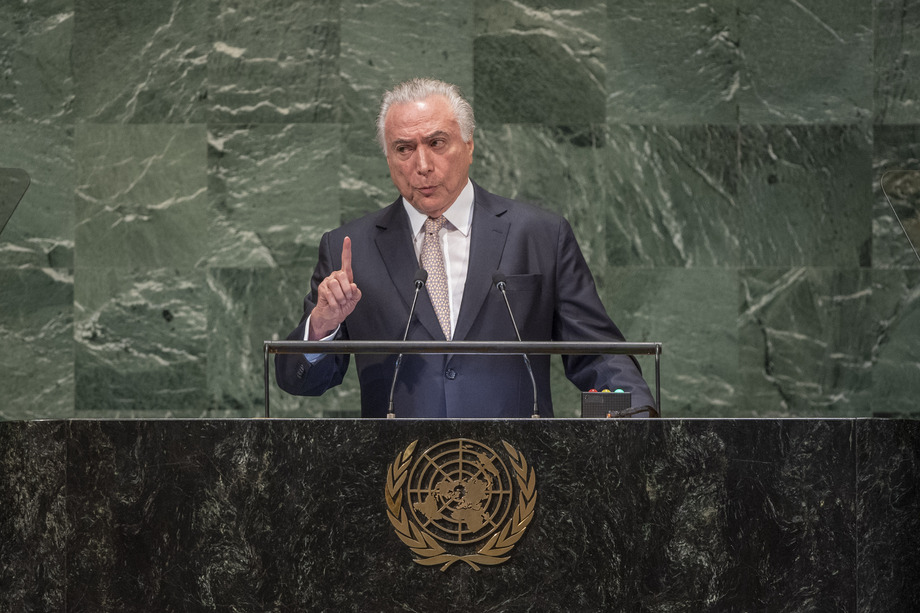 MICHEL TEMER, President of Brazil, said “we live in times clouded by isolationist forces”.  Old intolerances are being rekindled and unilateral relapses are increasingly less of an exception.  Stressing that such challenges must not intimidate the international community, he urged that isolationism, intolerance and unilateralism be responded to with the very best of the world’s peoples.  Noting that his country has been responding to isolationism with more openness and more integration, he stressed that shared development depends on more international trade and investment flows, more contact with new ideas and new technologies.  By remaining open to others, nations will build a shared prosperity.

Brazil has carried out a universalist foreign policy, he continued.  It has deepened the integration mechanisms in its geographic neighbourhood.  His Government is strengthening as well as starting trade negotiations with partners from all regions.  In that regard, Brazil has focused on its ties with the countries forming the Pacific Alliance and is seeking an even more united Latin America, as is enshrined in its Constitution.

Isolation may give a false sense of security, he went on to say.  Protectionism may even sound seductive, but it is through openness and integration that harmony, growth and progress can be achieved.  Brazil has also responded in a resolute manner to the challenge of intolerance through dialogue and solidarity.  Those values honour the Universal Declaration of Human Rights, a document that will soon celebrate seven decades.  Making it a reality remains an imperative that requires permanent attention and efforts.

Migrants are being threatened by a lingering crisis and have had to make a risky decision to leave their homelands, he said.  There was a duty to protect them through the Global Compact for Migration.  One million Venezuelan nationals have left their country of origin in search of better living conditions.  Brazil has welcomed thousands and, along with the Office of the United Nations High Commissioner for Refugees (UNHCR), has built shelters to help accommodate them. Brazil has also issued formal documents so that they can work in Brazil and receive schooling and healthcare.  The solution to the migration crisis will be forthcoming when Venezuela again finds the path to development, he said, adding that Brazil is proud of its tradition of hospitality.

Brazil is a country so diverse that there is a piece of the world in every Brazilian national, he went on to say.  As dialogue and solidarity are antidotes that help fight bigotry, they are also the cornerstone of long‑lasting peace.  In the Middle East, his country joined the ongoing celebrations of the seventieth anniversary of Israel and renewed its commitment to the two-State solution.  It has also supported international efforts to put an end to the conflict in Syria, a conflict that has been going on for too long.  In 2017 alone, Brazil donated nearly one metric ton of medicines and vaccines to assist the children affected by the conflict in Syria and welcomed a number of refugees.  In the Korean Peninsula, a sense of dialogue and solidarity has informed the position of Brazil on denuclearization.