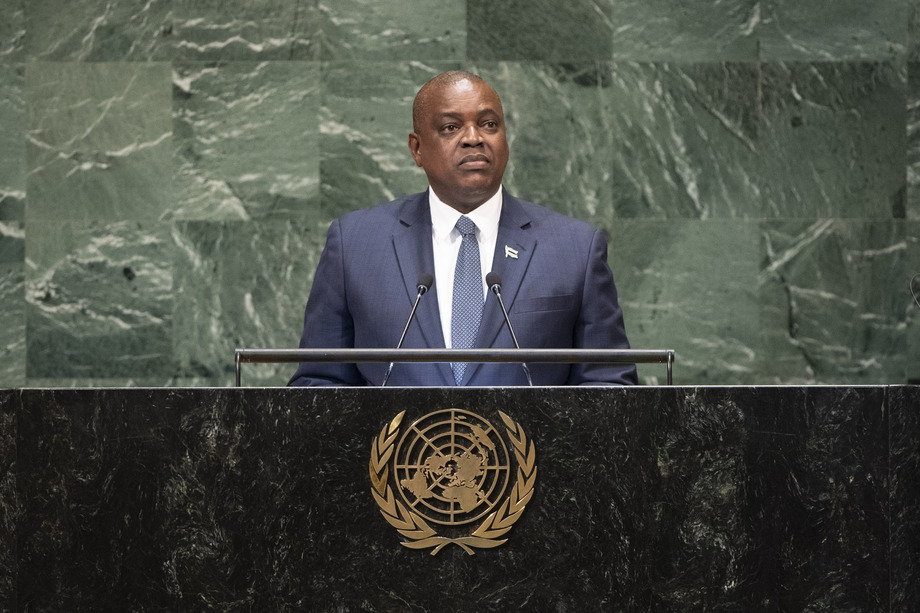 MOKGWEETSI ERIC KEABETSWE MASISI, President of Botswana, said the theme of the general debate — “Making the United Nations relevant to all people:  global leadership and shared responsibilities for peaceful, equitable and sustainable societies” — should inspire Member States to fulfil the principles of the United Nations Charter and the goals set out in the 2030 Agenda for Sustainable Development.  Much remains to be done to achieve prosperity for all, as 783 million people are living in extreme poverty, 2.3 billion people lack access to basic sanitation and 4 billion have no social protection.  “It is therefore apparent that none of us, whether big or small, can overcome these gigantic development challenges alone,” he said, calling for strengthened multilateralism as well as support for individual States that face their own unique challenges.

While Botswana is classified as an upper middle-income country, it faces the same development challenges as less developed nations, he pointed out, appealing for ongoing support in the areas of human capital, infrastructure and capacity development for the private sector, and technology transfer.  Reaffirming Botswana’s commitment to the 2030 Agenda and noting its alignment with Agenda 2063 of the African Union, as well as the Southern African Development Community (SADC) Integration Agenda, he said there remains a long way to go to eliminate extreme poverty, given than 35 per cent of Africa’s population — 395 million people — still live in abject poverty.

He outlined Botswana’s efforts to improve the well‑being of its people through its National Vision 2036 policy, which gives priority to economic diversification, sustainable growth, job creation and investment in human capital.  He welcomed reforms to the United Nations development system, stating that stronger United Nations country teams and a reinvigorated resident coordinator system will help achieve the Sustainable Development Goals.  Effective coordination between the United Nations and the African Union should avert a duplication of development efforts, thus enabling effective use of limited resources.

Expressing full support for the Human Rights Council and the International Criminal Court, he noted that 1,019 human rights defenders, journalists and trade unionists have been killed in 61 countries since 2015.  He also voiced deep concern regarding the protracted conflicts in Afghanistan, Mali, South Sudan, Syria and Yemen, and urged all parties to protect civilians and humanitarian personnel.  Welcoming the Joint Declaration of Peace and Friendship by the Presidents of Ethiopia and Eritrea, he added that he looked forward to the adoption in Morocco later this year of the Global Compact for Safe, Orderly and Regular Migration.

“As a global community, we need to address the problems of illicit financial flows, money-laundering and corruption, which are haemorrhaging resources needed to implement the Sustainable Development Goals,” he said.  Recalling that Goal 16 calls for a substantial reduction of corruption and bribery, alongside the recovery and return of stolen assets, he said the declaration by African leaders of 2018 as the Year for Combatting Corruption marked an opportunity for a renewed commitment to combat corruption.  For its part, Botswana is finalizing legislation to strengthen Government integrity, transparency and accountability.