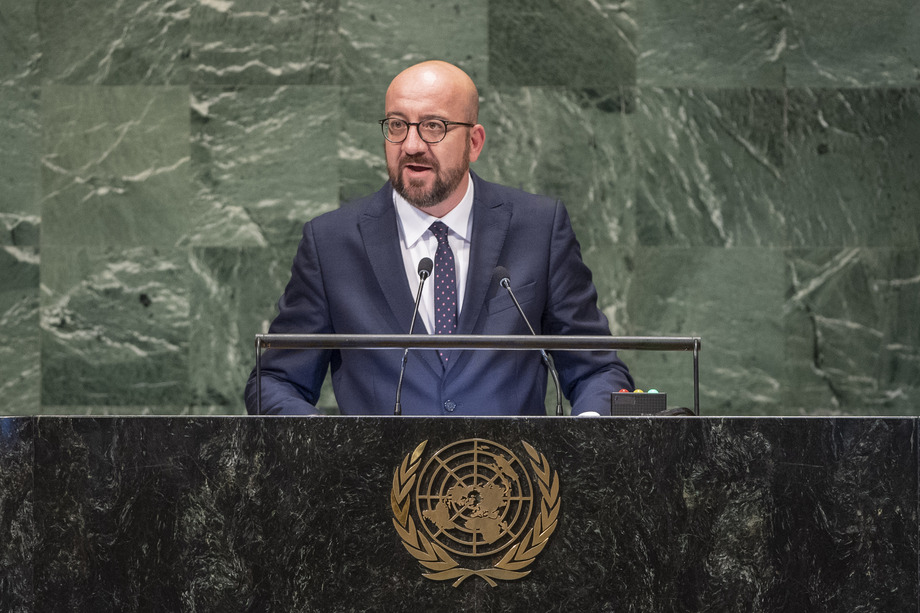 CHARLES MICHEL, Prime Minister of Belgium, recalled that unilateral actions and a lack of dialogue led to the horror of two world wars.  The universal values of freedom, rule of law and democracy remain the best safeguards for fundamental human rights and freedom.  Multilateralism is not an empty concept but rather the conviction that tireless dialogue is key, he said, further describing it as the choice of the battle of ideas and arguments over the battle of arms.  Multilateralism requires patience, but it is the only way to eradicate poverty, push out terrorists and preserve resources.

He expressed regret that agreements born of intense and difficult negotiations like the Paris Agreement and the Joint Comprehensive Plan of Action can be unilaterally tossed aside.  “Trust and cooperation between sovereign nations implies respect for promises and commitments that were made,” he said, underlining that prior to the signing of the Joint Action Plan, Iran was on the brink of acquiring nuclear weapons.  While noting that the Plan is not comprehensive as it does not cover ballistic missiles, he said those who criticize it should seek to open a new chapter of multilateral cooperation to improve it.  Belgium has been elected as a non-permanent member of the Security Council for the upcoming two‑year period, he noted, pledging to expand dialogue, fuel transparent and respectful debates, and work in favour of prosperity, security and respect for the planet.

He called for a regular assessment of each peacekeeping mission’s contribution to long‑term political stability, adding that “the presence of blue helmets on the ground cannot become a screen for political resignation, neither in conflict zones nor on the regional or international level”.  For centuries, trade has been promoting peace between peoples.  Freedom of trade must be based on fair and healthy competition with ambitious social and environmental standards.  He welcomed the results of the fair trade agreement that was recently concluded between the European Union and Canada.  Underlining that before 2050, the African continent will have 2.5 billion inhabitants, he called for an ambitious free‑trade agreement and a win‑win comprehensive partnership between Europe and Africa.

Underscoring that climate change knows no borders and that natural resources are limited, he criticized the obstinacy of those who deny it, comparing them to those who used to say the earth is flat.  Natural disasters are increasingly large in scale and deadly, and climate change will cause and aggravate conflicts, he warned, citing the situation in West Africa where access to potable water has increased tensions.  “In the face of this existential threat, for our children, we must assume shared responsibility,” he said, calling for the implementation of the Paris Agreement.

While the importance of the migration issue has taken an unprecedented scale, he stressed the need to “remove migration out of the hands of human traffickers, who are modern day slave traders”.  Orderly and legal mechanisms for international migration must be improved.  The Global Compact is a step in the right direction.  Noting that extremists of all sides are taking advantage of migration issues for political or financial gains, he stressed that peace is the international community’s most important asset; but it requires vigilance.  The challenges the world faces today have no boundaries and no country alone can overcome them, he said, reaffirming his faith in multilateralism.