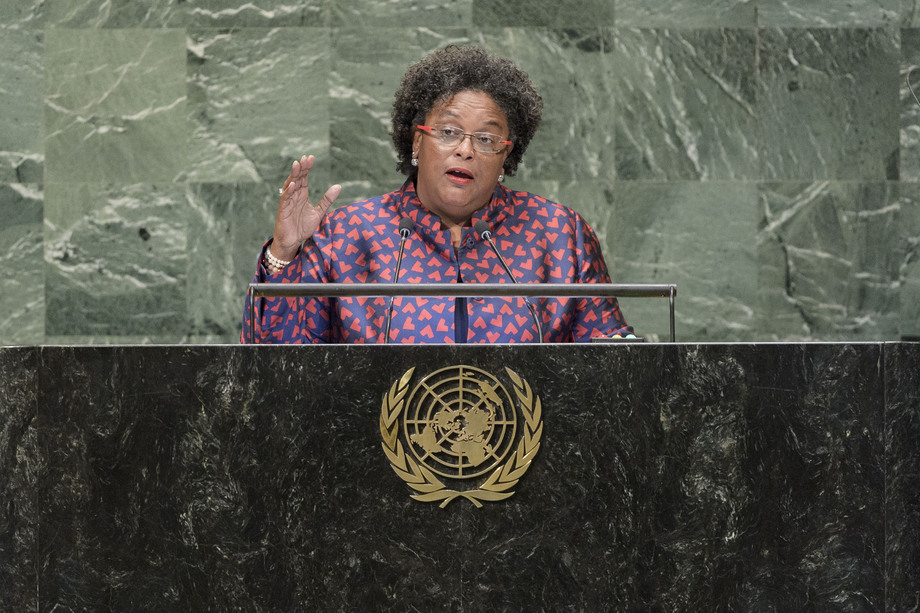 MIA AMOR MOTTLEY, Prime Minister of Barbados, began by talking about the string of cataclysmic weather events of the last 24 hours:  tropical storm Kirk that hit Barbados and Saint Lucia, the earthquake that impacted Martinique, Dominica and Guadalupe; the earthquake and tsunami in Indonesia; and an impending typhoon in Japan.

“In good conscience, I cannot give the speech that I prepared,” she said, noting that she was cutting her trip short to fly home tonight to deal with the floods at home.  “Some wish that I would speak on denuclearization or non‑communicable diseases, or other [issues],” she said, but added that now the world is beginning to understand the impacts of climate change.  “I ask this global community to pause.  Time is running out,” she said, referring to taking concrete action on climate change.  She added that yes, we have banned single‑use plastic and other items that pollute, but these are decisions on a national level.  We can try to ensure fossil fuels are phased out by 2030, but this is against a background that is not putting mechanisms in place.  “What does this mean to those who are relying on a green climate fund, but the capacity is simply not there?” she said, calling on all people of the world to look after one another.

“We, as a small State, are used to being treated as if we didn’t exist,” she said, adding that it is as if you can just cut off a region.  She urged sovereign countries to ask themselves if this is still the world that is promised in the Universal Declaration of Human Rights.  Underscoring the need for small States to have a corridor of stability to withstand the shocks of climate change, she noted the importance of the United Nations as a multilateral body.  “It matters.  It protects the small and constrains the large.  When you take away multilateralism, who will hear us?”

But what is clearly required is behavioural change, she said, adding that we ask ourselves why we must come here year after year and speak about the embargo of Cuba again and again, as if it is pro forma.  We speak about territorial disputes but see no gain.  “It cannot be alright with the issue of climate change, because this is a matter of life or death,” she said.  She called for a reconsideration of the commitment of keeping global temperature rise to below 1.5°C, because 2°C is calamitous, she said, adding that the world needed financing that speaks to the needs of small island developing States.

Our principles must remain constant, she said, adding that:  “What happened in the last 24 hours is not a science fiction movie.  We must have caring and empathy,” she urged, asking for the world to pause and get this one right.  “It is not about Governments anymore, it is about people,” she said.