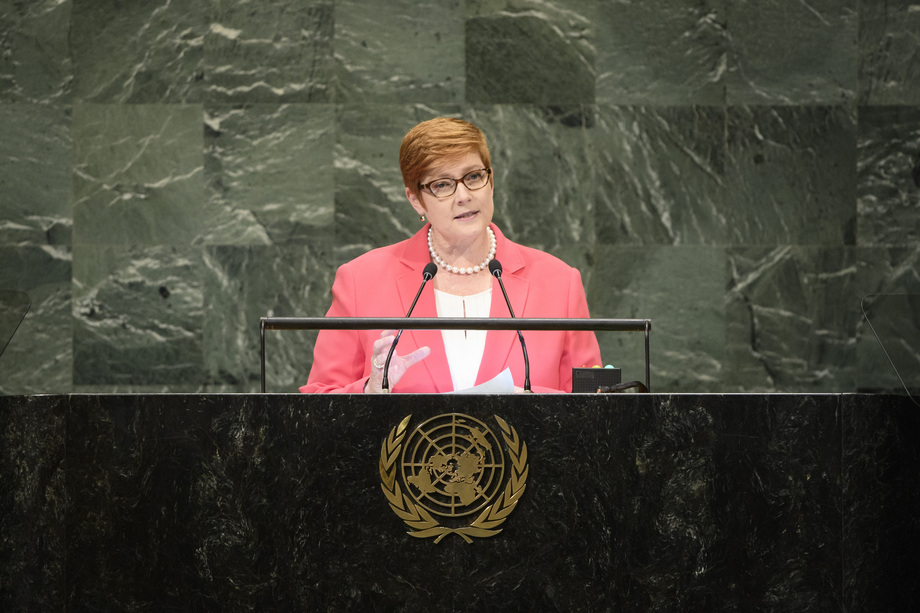 MARISE PAYNE, Minister for Foreign Affairs of Australia, said that at a time of rapid change, rising nationalism and geopolitical competition, solutions to urgent global challenges begin with collaboration.  With that in mind, Australia drafted a white paper in 2017 analysing trends and setting out its policy response, including taking responsibility for its security and prosperity and investing in national resilience and strength while working with regional and global actors.

Citing many challenges requiring concerted action, she said ridding the world of nuclear weapons is a priority.  Australia supports non-proliferation progress, including the Iran nuclear agreement and developments on the Korean Peninsula.  Pointing at a new pattern of chemical weapon use, she called on Syria to cease deploying those arms and urged the Russian Federation and all nations to reinforce the ban on such substances.

She commended the Secretary-General for his gender parity initiatives and for declaring zero-tolerance for sexual exploitation and abuse.  Highlighting that Australia was among the first Member States to draft a national action plan on women, peace and security, she said achievements include reaching a minimum of 15 per cent of female military members deployed on peacekeeping mission teams.  Indeed, lasting and resilient security can only be achieved by including women in all aspects of peace and security initiatives, she said.

Providing examples of regional cooperation and working together towards common goals, she said Australia is actively engaged with partners in the investigation of the downing of Malaysia Airlines flight MH17 and has signed a new maritime boundaries treaty with Timor-Leste.  The Government is also strengthening bilateral relations in the Indo-Pacific region and supporting neighbouring countries with aid programmes that drive economic growth and human development.  An active partner with the Association of Southeast Asian Nations (ASEAN) and regional forums, Australia seeks a region that promotes accountability and respects international law for the benefit of all countries, she said, expressing support for United Nations reform.  “We need to work together to keep pace with the needs and aspirations of the people we serve,” she added.