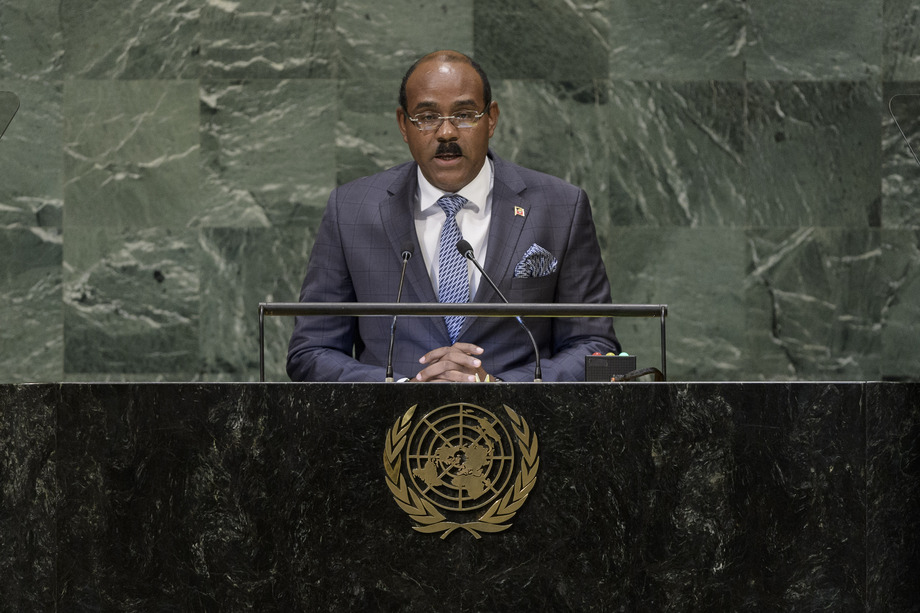 GASTON ALPHONSO BROWNE, Prime Minister of Antigua and Barbuda, emphasizing that a few privileged nations are making decisions that impact the lives of billions of people, said the General Assembly must be revitalized to become a place for action and results.  For years, it has been marginalized by the Security Council and the notion that a small group of powerful nations should make decisions for the rest of the world.  Until the Assembly is made relevant, the actions of the Council and other organizations will be endured but not embraced, accepted but not respected, and enforced but not legitimized.

He said that, as leader of Antigua and Barbuda, he puts its interests first.  However, it would be foolhardy to stand up only for his country.  Such a dog‑eat‑dog policy, if practiced by every nation, would result in short‑term gains for rich countries and, ultimately, losses for all.  “Loyalty to myopic, nationalistic ideals cannot trump patriotism to our common humanity,” he said, emphasizing that peace, security and prosperity can only be achieved through international teamwork.

He called for the Caribbean to be recognized as a zone of peace, stating that for too many centuries, it has been a place for other people’s conflicts and ambitions.  “We want no more to be the theatre of proxy wars by others,” he said.  Welcoming the recent visit to Havana by the Chair of the United States Senate Foreign Relations Committee, he said it is time for the United States Congress to lift the trade embargo, thus putting Cuba’s talents in medicine, the arts, music and education at the disposal of all humanity.

He went on to say that when the Assembly debates the responsibility to protect, bellicose talk of military intervention must be discouraged.  When the United Nations decides that democracy and human rights are emasculated by tyranny, then it must collectively agree upon the action to be taken.  Turning to trade, he said the WTO is not perfect, but walking away from it or breaking it down will only destabilize the global trading system.  Fifteen years after winning a WTO arbitration case, he added, his country still awaits compensation from the United States.

Injury to small island developing States in the Caribbean and Pacific due to climate change is continuing without compensation, causing their economies to decline, creating internal refugees, scaring away investment, escalating insurance costs and increasing debt levels, he said.  With donors having delivered less than half of the pledges they made after Hurricanes Irma and Maria, reconstruction is far from complete.  “The problem is global and the solution is global,” he said, urging a global policy dialogue integrating environment with development on the fundamental understanding that every country must do its part to combat climate change.