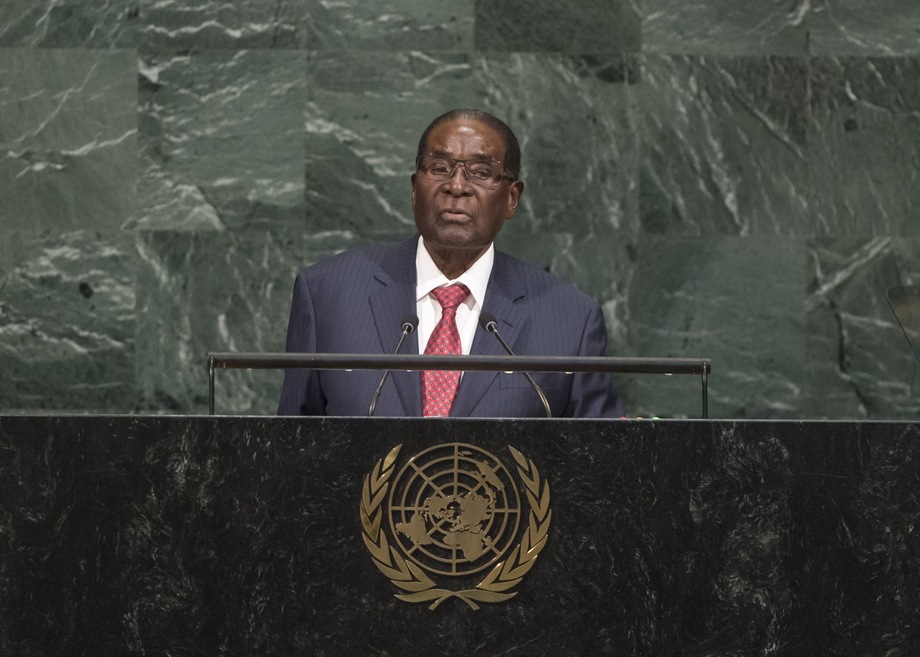 ROBERT GABRIEL MUGABE, President of Zimbabwe, said the global development agenda demanded a radical, unprecedented paradigm shift in every sphere of human life.  He stated that we could not halt or reverse the destruction of our natural habitat or the rise in atmospheric temperatures without a change in contemporary production and consumption patterns.  Furthermore, the world could not halt or reverse the widening gap between rich and poor without deeper international cooperation and reform of the international system.

In Africa, the system perpetuated a “historic injustice” that could never be justified, and for that reason he reiterated his country’s support for the African common position on Security Council reform, also known as the Ezulwini Consensus.  The negotiations and process intended to yield reforms were “painstakingly slow,” he continued, and the international community was left to wonder whether those who “enjoy” and “abuse” the power and privileges of the current system were sincere interlocutors in the reform discussions.  “By some strange logic, we expect to reap peace when we invest and expend so much, in treasure and technology, in war,” he said.

The international community must tackle the root causes of conflict: enduring poverty and deprivation, unequal access to resources, the denial of rights to self-determination of peoples and interference in internal affairs of other States.  Noting that the peoples of Western Sahara and Palestine lived under “immoral” colonial and foreign occupation, he called upon the Security Council to demonstrate its authority by enforcing resolutions, and holding the independence referendum in Western Sahara “without delay” in partnership with the African Union.
Noting that Zimbabwe embraced the 2030 Agenda as an integrated and comprehensive approach to address national and global challenges, he recalled that his country participated in the voluntary national review at the recent high-level political forum on sustainable development.  He recognized the need for partnerships within and outside national borders, and with the United Nations.

Zimbabwe remained an advocate for the respect of sovereignty and defended the rights of each country to take decisions in exercise of their sovereign rights, however, he expressed embarrassment by the “return of a Goliath”, the United States, which threatened the “extinction” of other countries.  “I say to the United States President, Mr.  Trump, please blow your trumpet in a musical way towards the values of unity, peace, cooperation, togetherness and dialogue which we have always stood for, and which are well writ in our very sacred, documented Charter of the United Nations.”  He reiterated that the international community would like to be guided by the United States, not by the promise of “damnation” or the “monster” of imperialism.  On climate change, he said that the decision by the United States to abandon the Paris Agreement placed other countries at risk.  It was vital that all countries, in keeping with the provisions of the Framework Convention on Climate Change, “halt the inexorable march towards the destruction of that upon which our own existence depends,” he stated.