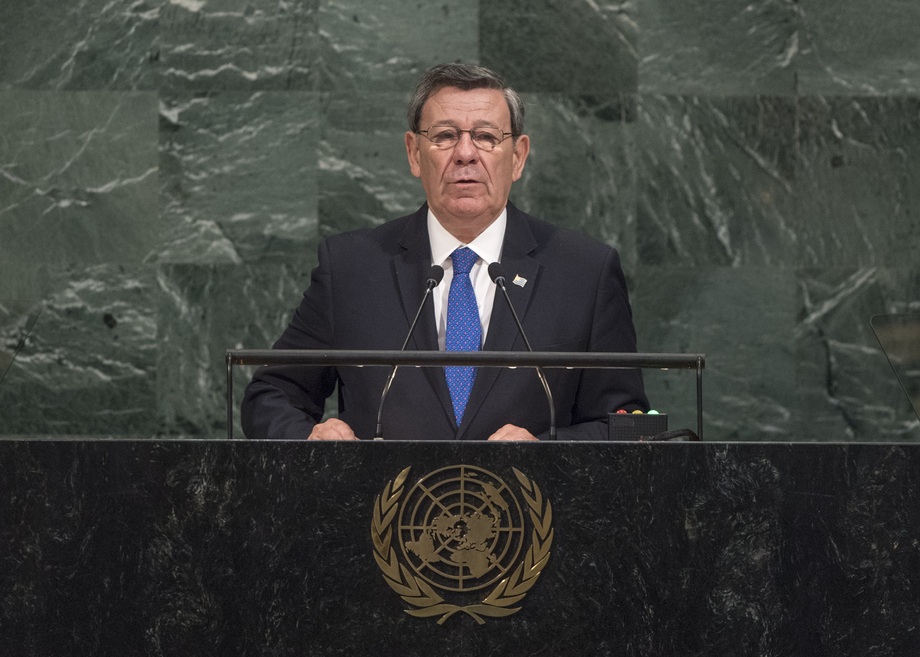 RODOLFO NIN NOVOA, Minister for Foreign Affairs of Uruguay, said strengthened international coordination bodies were needed more than ever, urging respect for the principle of sovereignty.  “The United Nations must become stronger,” and the Assembly must gain greater prominence.  Uruguay’s foreign policy was based on the pillars of democracy, human rights, the defence of international law, and pursuit of peace.  Those principles had retained prominence despite the changes of political power in the country, he said, underscoring Uruguay’s commitment to making its voice heard on the international stage.  Unprecedented violence, arms proliferation, and the increase in terrorism, cyberattacks, hunger and climate change required a strong commitment from the international community.  Today, millions were affected by armed conflict with hundreds of thousands killed and millions displaced.  “We should not get used to standing idly by,” he stressed.

He urged all countries to increase efforts to combat human trafficking, and ensure development and social growth, citing inequality and the persistence of international forces as drivers of those threats.  He expressed support for the 2030 Agenda for Sustainable Development and its 17 Sustainable Development Goals, noting that Uruguay had recently presented its Voluntary National Report to the Economic and Social Council’s High-Level Political Forum on Sustainable Development.  He expressed deep concern over the threat of terrorism, stressing that arms trafficking and trade had contributed to civilian deaths.  Thus, he voiced support for the historic Arms Trade Treaty and related international instruments.  The Security Council’s permanent members had produced 74 per cent of arms exported between 2011 and 2015, and military spending continued to grow.  Many needs could have been addressed if those resources had been redirected to social and economic development.

Without diplomacy, the consequences of nuclear arms proliferation could be devastating, he said.  Yet, nuclear Powers continued to update their stockpiles, and more than nine countries were in a state of high alert, with arsenals “ready to be used just a few minutes after a threat is announced”.  Welcoming the international Treaty on the Prohibition of Nuclear Weapons, which Uruguay had just signed, he urged other Member States to do the same.  He condemned recent launches and tests by the Democratic People’s Republic of Korea, and called on the United States to avoid a verbal escalation of violence.  Those “dynamics of antagonism” could make it impossible to turn back.  He expressed hope that an instrument would be negotiated to end attacks on civilians and humanitarian workers, reaffirming Uruguay’s support for the United Nations zero-tolerance policy on sexual exploitation and abuse by peacekeepers.  He welcomed progress made in the peace process in Colombia and rejected the United States blockade against Cuba.