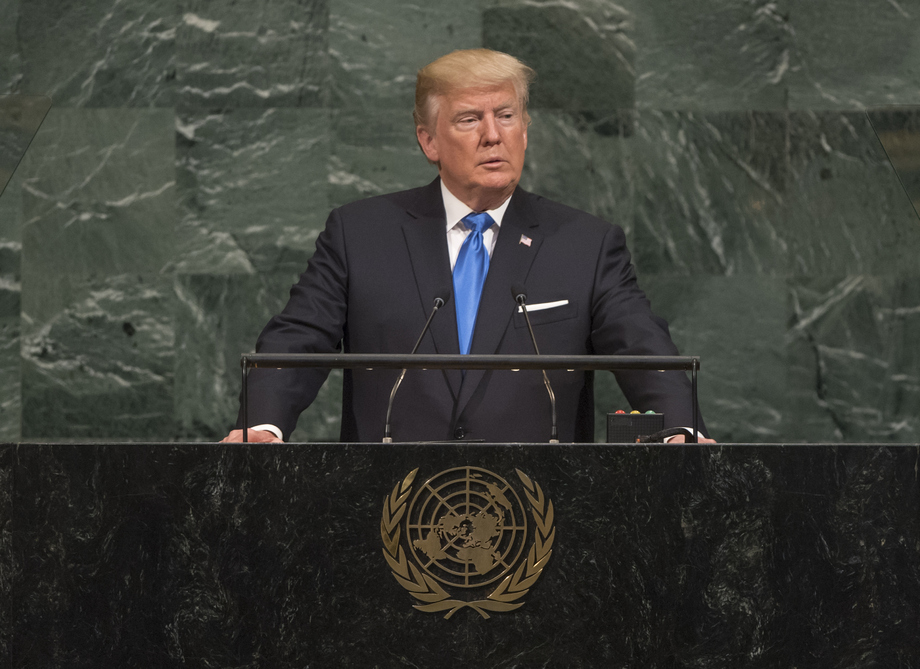 DONALD J. TRUMP, President of the United States, said “we live in a time of extraordinary opportunity” with major breakthroughs in technology, medicine and other important areas.  However, each day also brought growing dangers, including from terrorists and extremists.  Noting that some rogue regimes “represented in this body” supported terrorists, he said such Powers sought to collapse States.  Meanwhile, the trafficking of weapons and people, forced migration and new forms of technological aggression also threatened the world’s citizens, he said.  It was up to the international community to decide whether it would “lift the world up”, or let it fall into greater peril.  Recalling that the United Nations was founded in the aftermath of two world wars to help shape a better future, he said the United States had developed the Marshall Plan to help restore Europe, guided by the pillars of sovereignty, security and prosperity.  The world was safer when States were strong, independent and free, he said, and the success of the United Nations depended on the independent strength of its Member States.  While the United States did not expect diverse countries to share its values, they must respect the rights of their own peoples and those of every other sovereign nation, he emphasized.  “This is the foundation for cooperation and success.”

Noting that the United States Constitution and its first three words — “We the people” — had provided inspiration to countries around the world, he said that he had not been elected to take power, but rather to give power to the American people, including in the field of foreign affairs.  “As President of the United States, I will always put America first,” just as other leaders should always put their own countries first, he said, adding that, meanwhile, all countries must work in harmony.  While the United States would continue to be a great friend, it would no longer enter into deals from which it received nothing in return, he cautioned, adding:  “It is in everyone’s interest to seek a future where all nations can be sovereign, prosperous and secure.”  In emerging from the Second World War, the United States and its allies had not sought to impose their will on others, but instead, had worked to build institutions such as the United Nations.  “We want harmony and friendship, not conflict and strife,” he declared.  The world must have enough strength and pride to confront today’s dangers, including rejecting threats to sovereignty, from Ukraine to the South China Sea, he said, noting that a small group of rogue nations respected neither the rights of other nations nor those of their own people.

None had shown more contempt for those rights than the depraved regime of the Democratic People’s Republic of Korea, which was not only responsible for the deprivation of its own people, but for their continued imprisonment, torture and killing.  It was also responsible for the death of an American student and the kidnapping of a 13-year-old Japanese girl.  Its reckless pursuit of nuclear weapons and ballistic missiles now threatened the entire world, he said, adding that it was an outrage that any country would continue to trade with such a regime.  If the United States was forced to defend itself or its allies, “we will have no choice but to totally destroy North Korea”, he warned, adding that “hopefully this will not be necessary”.  Thanking all Member States that had voted in favour of Security Council resolutions imposing sanctions on that country, he said there was more to do to isolate the Kim Jong‑un regime.  It was also “far past time” to address the threat posed by the Government of Iran, he said, adding its own people were its longest-suffering victims.  Rather than using its oil profits to improve lives, Iran used them to fund Hizbullah and other terrorists that kill innocent Muslims and attack their peaceful Arab and Israeli neighbours, support the Bashar al-Assad regime in Syria and finance Yemen’s civil war.

“We cannot let a murderous regime continue these destabilizing activities,” he said, underlining also that the United States would not abide by an agreement that provided cover for the eventual establishment of a nuclear weapons programme.  The Joint Comprehensive Programme of Action was “an embarrassment to the United States”.  Recalling recent meetings with Saudi Arabia, he said there was agreement on the need to “stop radical Islamic terrorism”, and called on Governments to end their support for terrorist groups and hold those who had done so responsible.  The United States sought a de-escalation in Syria, he said, noting that the actions of the “criminal” Assad regime — including its use of chemical weapons — had shocked the world.  It was for those reasons that the United States had carried out an attack on a Syrian airbase.  Thanking Jordan, Turkey and Lebanon for hosting Syrian refugees, he described the United States as a compassionate nation seeking an approach to resettlement that would support refugees and enable their eventual return home.  Nevertheless, uncontrolled migration was deeply unfair to both the sending and receiving countries, he said, pointing out that his country continued to lead the way in providing humanitarian assistance to many countries.

Voicing support for reform of the United Nations, he said the Organization had failed to focus on results, while some States had “hijacked” its systems.  It was a massive source of embarrassment for the United Nations that countries with egregious human rights records sat on the Human Rights Council.  Meanwhile, the United States paid 22 per cent of its budget — an investment that “could easily be well worth it” if the Organization accomplished all its stated goals.  He noted that the United States stood against the corrupt, destabilizing regime in Cuba, he said, emphasizing that it would not lift its sanctions on that country until it carried out reforms.  The United States had also imposed sanctions on the regime of Nicolás Maduro in Venezuela, a socialist dictatorship that imposed suffering on its people.  The problem in that country was not that socialism had been implemented poorly, but that it had been carried out faithfully, he said, noting that, wherever true socialism or communism had been adopted, it had delivered devastation and failure.  “If this Organization is to have any hope of success for confronting the challenges before us, it will depend […] on the independent strength of its members.”  The true question for the United Nations was whether its Member States were “still patriots” and loved their nations enough to protect their sovereignty and take ownership of their own respective futures.