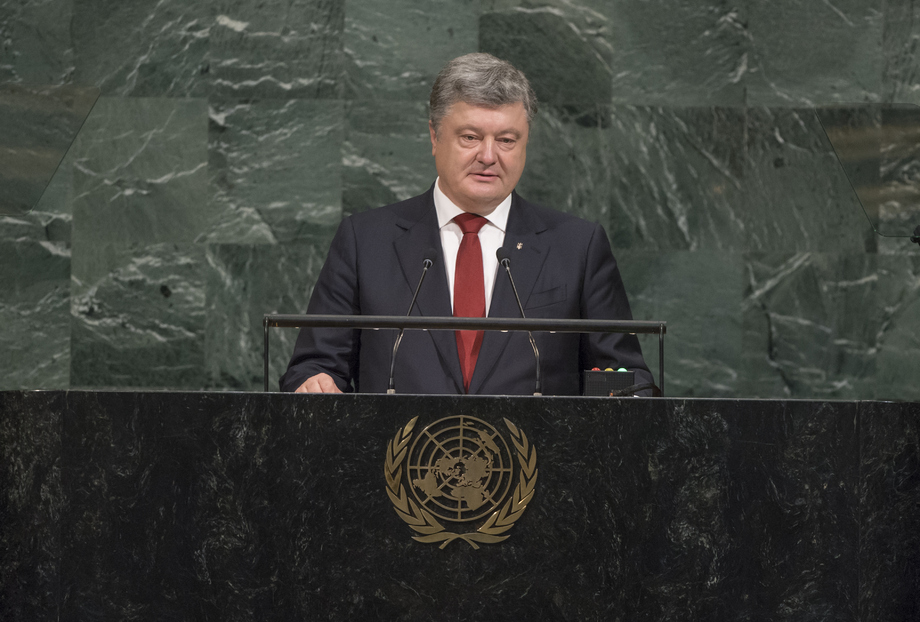 PETRO POROSHENKO, President of Ukraine, said transnational terrorism and use of force, the proliferation of weapons of mass destruction, human rights violations and environmental fragility were only a few of today’s global challenges.  Now was the time to act, and although only a narrow window of opportunity existed, and the United Nations should be at the forefront of that process.  Ukraine had always advocated for reform of the United Nations to respond to global challenges in a timely and adequate fashion.  He welcomed the Secretary‑General’s robust reform agenda, especially for the Security Council.

He said Ukraine could not have agreed more with the call for the universal respect of sovereignty, as expressed in the General Assembly Hall yesterday.  The United Nations was founded on the principles of peace and security, based on sovereignty and respect for borders.  Yet, those principles had been flagrantly violated by a permanent Security Council member against his country.  Ukraine had suffered from conflict for the last three years, resulting in the deaths of 10,000 people and the occupation of 7 per cent of its territory, while 20 per cent of its economy had been seized, destroyed or stolen.  The most horrific action was the Kremlin’s tactic to increase human suffering, with anyone who disagreed losing their freedom, or even their lives.  Crimean Tatars were being arrested for posts on social networks or simply displaying the Ukrainian flag on their property.

The Russian Federation had violated Security Council resolutions on human rights and ignored requests from the Office of the United Nations High Commissioner for Human Rights (OHCHR) for full access to the occupied parts of Crimea.  The situation required a proper response from the international community, which must keep a close eye on Crimea to avoid a new genocide against Crimean Tatars.  That the General Assembly had recognized the Russian Federation as an occupying Power proved the international community was “on the right track”.  The militarization of Crimea had affected the entire region and beyond, and he condemned the military exercises taking place there.  Russian occupying troops continued to violate ceasefires, while Ukrainians were being taken hostage or imprisoned for their opposition to the occupation.  He questioned whether stealing land, kidnapping, conduct of a hidden war, downing of civilian aircraft and spreading of lies was the behaviour to be expected from a permanent Council member.

He said the Russian Federation was not contributing to international security, but was rather its biggest threat, as it was in conflict with almost all its neighbours and had undermined every effort to restore Ukraine’s sovereignty.  The Russian Federation’s latest peacekeeping proposal aimed only at legalizing its proxies and freezing the conflict.  Stressing that any peacekeeping mission under United Nations auspices must be impartial and could not include personnel from the aggressor country, he recalled that the world had been stunned three years ago by the blowing up of flight MH17 in the skies over Donbass.  Ukraine was determined to bring justice to the perpetrators of that mass murder, he said, noting that two investigations had found that the Russian Federation was behind that tragedy.

For decades, Ukraine had been a resolute contributor to global peace and security, he said, notably by giving up its nuclear arsenal.  An advocate for non‑proliferation, Ukraine resolutely condemned the recent actions by the Democratic People’s Republic of Korea, he said, also expressing deep concern over the conflict in Syria and the Russian Federation’s use of occupied Crimea as a military outpost for the projection of power in Syria.  Concerned by the numerous, unresolved conflicts in Africa, he expressed Ukraine’s commitment to the 2030 Agenda and implementation of the Paris Agreement.

The representative of Ukraine, speaking in exercise of the right of reply, said the Russian Federation had been recognized by the United Nations as an occupying Power. As such, it had no legal or moral right to pronounce itself on Ukraine until it withdrew from Ukrainian territory.