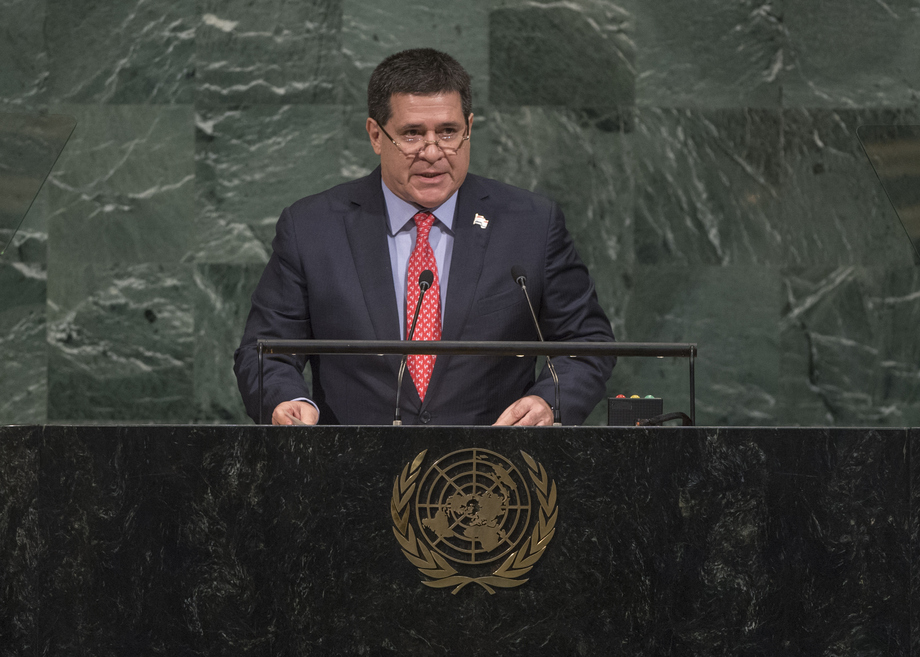 HORACIO MANUEL CARTES JARA, President of Paraguay, said a balance must be struck between the interests of all States in building a world order that developed relationships between sovereign nations rooted in trust and equal opportunity.  The efficient work of the United Nations was crucial in that regard, he said, calling for a more inclusive and representative Security Council.  Terrorism, drug trafficking and other challenges must be addressed collectively, and all stakeholders must do their part.  Encouraging States — especially those bearing the greatest responsibility for the greenhouse-gas emissions — to do their part to implement the Paris Agreement and “save our planet”, he went on to outline a number of national environmental initiatives.

Since 2013, Paraguay had enjoyed full democracy and respected the rule of law, he said, and benefitted greatly from international investment.  It also had joined the Organisation for Economic Co-operation and Development (OECD) and a World Intellectual Property Organization (WIPO) advisory committee, among other international bodies.  “Paraguay now goes beyond our own borders,” he stressed, adding that regional integration had benefits for all stakeholders.  Paraguay was working within the Southern Common Market (MERCOSUR) to boost regional economies, and globally, was committed to the 17 Sustainable Development Goals, having implemented a number of national programmes to advance their implementation.

Recalling his administration’s three initial goals of poverty reduction, inclusive economic growth and allowing Paraguay to take its place in the world, he said the country had changed its national culture to reflect the principles of accountability and transparency.  Strong emphasis had been placed on social investments and reducing inequality.  The Government was also implementing flagship programmes related to cash transfers, food subsidies and education for poor, young people.  It had granted a record $140 million in post-graduate scholarships for young people to study at 50 of the world’s most prestigious universities, many of whom returned to Paraguay to use their knowledge at home.  The Government had also provided more than 30,000 new housing units for families that had been ignored by previous administrations, he said.

Reaffirming Paraguay’s commitment to peaceful conflict resolution, he said the prohibition of nuclear weapons was enshrined in its national laws.  On the global level, nuclear disarmament should be carried out under a universal, legally-binding instrument.  He condemned the “irrational”, “provocative” acts of the Democratic People’s Republic of Korea, outlining his expectation that the Assembly would do the same.  Terrorism must be combated through concerted global efforts, he said, voicing support for United Nations peacekeeping operations, the protection of human rights, and the objective and impartial work of the Human Rights Council.  Expressing hope that Venezuela would find a peaceful solution to its crisis in the context of sovereignty, he expressed gratitude for Taiwan’s support to his country, and hope that the United Nations would identify the best way to facilitate Taiwan’s participation in its activities.