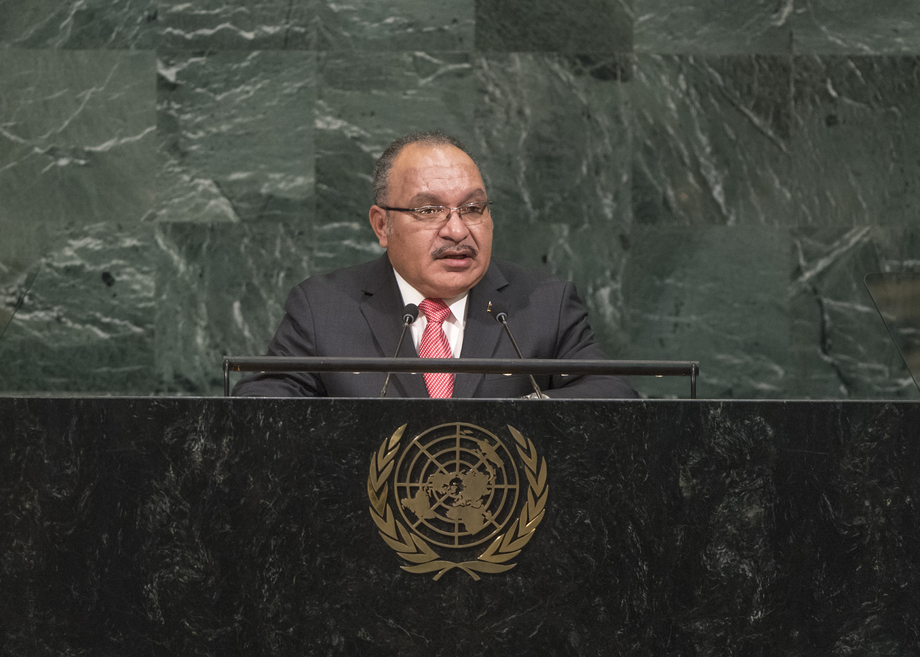 PETER PAIRE O’NEILL, Prime Minister of Papua New Guinea, said the country had recently held its tenth national election and the Government was determined to increase its focus on free education, universal health care and infrastructure, policies underpinning its commitment to the Sustainable Development Goals.  However, the best intentions to advance the country had been greatly influenced by the globalizing world and actions of others.  Global economic uncertainty, depressed commodity prices and political instability undermined growth in developing countries.  He condemned the Democratic People’s Republic of Korea nuclear detonations and missile tests that threatened everyone, and especially in the Pacific region.

Climate change, he pointed out, was among the greatest threats to humanity and had already taken lives and destroyed communities.  Papua New Guinea and other Pacific island nations were highly vulnerable to its adverse impacts, such as extreme tropical storms, severe drought and seawater flooding.  Such phenomena stemmed from the enhanced development of the powerful nations, which had harmed the chances for development in smaller ones.  “In Papua New Guinea, and around the world, our people are dying as a consequence,” he declared, calling for increased action and a strong commitment to the Paris Agreement.

Turning to the refugee crisis, he said the responsibility for accommodating refugees and migrants lay with the countries whose actions had led to their displacement.  A more sensible and humane approach was needed to address the mobility of people, as the privilege of free travel was held only by a “lucky few” born in developed countries.  “All too often, the concept of human rights is just the theme of convenience,” he said.

He expressed full support for United Nations reform which should make the Organization “fit for purpose”.  There was broad agreement on the importance of such issues, but the main challenge centred on how to carry it out and actually deliver.  Reform of the Security Council should make that body more broadly representative, transparent, accountable and effective.